Luke Egan spent nearly two decades on the Championship Tour. After retiring in 2005 with a handful of top five finishes (including a No. 2 ranking in 2000), he's continued to be involved behind the scenes. During a 10-year stint with Billabong, he wore several hats: Managing the international team, serving as contest director, and stepping in to coach Joel Parkinson during his 2012 World Title run. 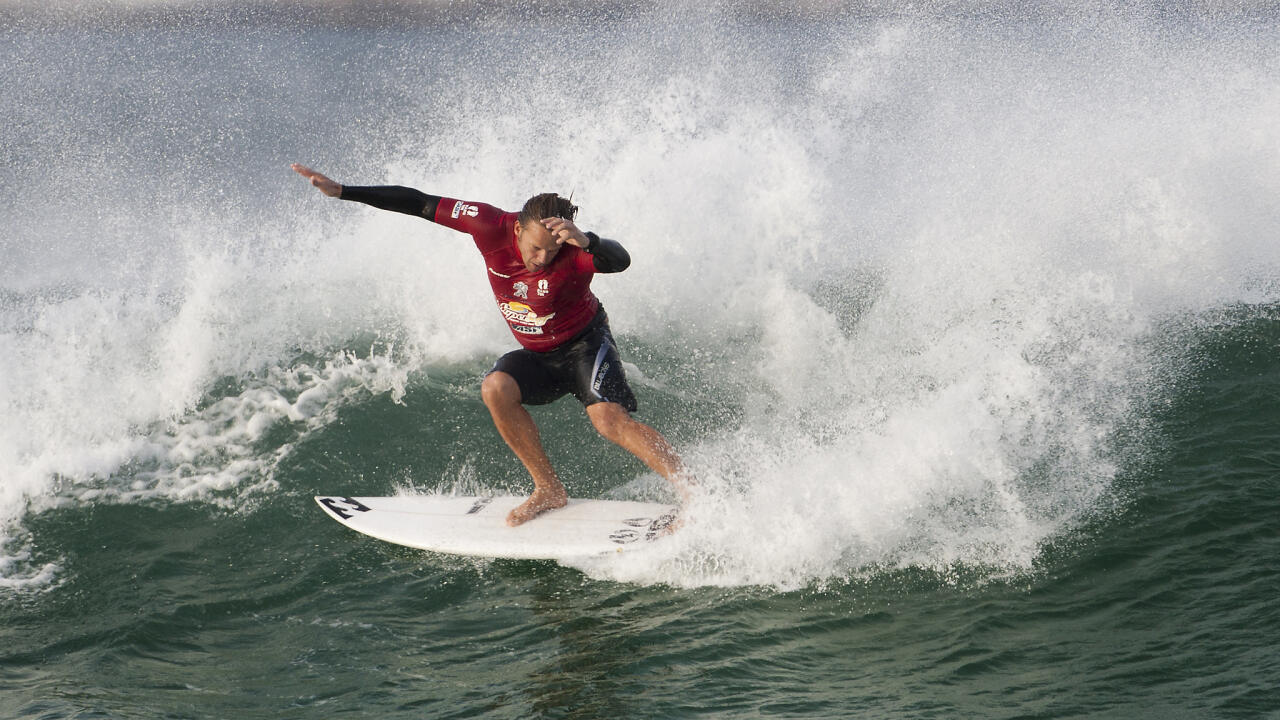 More than a dozen years after retiring from the tour, Luke Egan's blade is still sharp. - WSL / Kelly Cestari

While Egan has been pursuing new business ventures in recent years, in September, he jumped back into the coach's corner. This time, it was to coach World Title contender Courtney Conlogue, starting right after the Swatch Women's Pro in September. With Egan's support, Conlogue won the very next event in Portugal, the Cascais Women's Pro, which pushed the title race to the next stop, in France. While Tyler Wright eventually sealed the deal for the Title at the Roxy Pro, Courtney's never-quit attitude kept things going down to the wire. Before Egan left Europe, he chatted with the WSL about his reaction to the race, and thoughts on coaching.

WSL: What was your message to Courtney after she fell just short of the title again this year?
Luke Egan: When I got a chance to talk to her after her loss in France, I was like, 'Mick Fanning has had a bunch of second places, Joel Parkinson has had a bunch of second places. If you look at any World Champ they've had a couple. There can only be one winner. Just take it as another year of full experience to gather more information. It's all part of the process of becoming a World Champ. Use all that info to push harder.' Egan was the main man in Joel Parkinson's corner during his 2012 title run. - WSL / Kelly Cestari

You were brought in to help her after the contest at Lower Trestles. What's your general philosophy of coaching, coming in?
I always try to keep a wider view on anyone who is successful and how they are doing. Paying attention to their approach or anything that fascinates me. When you are a coach you kind of have to research other things, like other sports. It's not just about the technical aspects of riding a wave. Their mind has so much to do with it. You need to get on the same wavelength as your athlete.

How did you develop that outlook?
It's funny, way back in the day when I used to compete, you'd always partner up with a friend or someone and you would coach each other. You couldn't really afford to have people traveling with you. You were just a one-man band. Especially Australians, we were always helping each other. If someone had a heat before you, you would go up and ask them. I think my coaching experience just comes from being on the World Tour 15 or 20 years ago when we used to help each other win whenever we could -- until you're in a heat together. Stripped down, Egan's most powerful coaching technique is providing subtle reminders to his pupils about who they are, and what they're doing. - WSL / Kelly Cestari

Back in the day when I used to compete, you'd always partner up with a friend or someone and you would coach each other. You couldn't really afford to have people traveling with you. You were just a one-man band.

It's interesting to me. You get a surfer with all this talent but on the day of competition, the mind is 90 percent of your performance. I think that anyone that has been on tour for more than 10 years and has had a few Top 5 finishes, they could be a great coach. It takes experience. I've been to Hossegor over 25 times -- the culture, the things to look out for. You know the operation and you know the waves.

1:10
Egan helped Conlogue channel her motivation and drive at the Cascais Women's Pro in early October, where she surfed her way to a win over Tyler Wright, and kept the title race alive.

What are some the mental aspects of surfing that you work on with your athletes?
I think all sports, or even successful business owners, that mindset can be translated -- things like time management, pride in competing. It's about narrowing it down so you have the best opportunities. It's one thing getting to that level, but it's a whole other thing to stay there. It's hard to find the motivation. That shows with some of the rookies that show up. They did all that work to get here but now to stay here it's even harder. People show up and it usually takes them a couple years to grab hold of it.

What's your take on the state of the sport now, and where it's headed?
I heard Kelly saying the other day that he thinks surfing is like martial arts -- in that you have to adapt to different locations, and different elements. I really like that aspect of surfing. The athletes just keep getting better and better. Like John John won the Eddie and he's World No. 1. To me, that blows me away -- the versatility. It's like, what more can these athletes do? Egan did a lot of the heavy lifting during Joel's big moment -- literally. That's him under Parko's right leg. - WSL / Kelly Cestari

The athletes just keep getting better and better. Like John John won the Eddie and he's leading the rankings. To me, that blows me away -- the versatility. It's like, what more can these athletes do?

I think we are going to see more well-rounded athletes going forward. And they'll be better in all different conditions. That's what I like to see. The Eddie used to be quite specialized. Now the athletes on the CT Tour are winning these specialty events that take many years of experience. And for the girls, they've bridged the gap between the men's and the women's so much.

Now that the title has been decided, what's your plan for the women's contest in Maui, and beyond?
The surfing level is so high now that it makes it hard for the athletes themselves to collect all the data of what is going on around them and process it. For me, that's what a coach is. You collect the data, give them what they need, and discuss what's going on. After the event, it's experimenting or working with equipment.

2:24
Heading into the Maui contest last year, Conlogue was in a heavy Title battle with Carissa Moore. This time, with the Title out of the way, Egan sees Maui as a chance to experiment with new approaches, minus the pressure.

For me, that's what a coach is. You collect the data, give them what they need and discuss what's going on. After the event, it's experimenting or working with equipment.

In terms of Courtney, she's so enthusiastic. There's a hunger there. There's a few different things that I want to experiment on with her during the down times. Just so she can harness that energy a little better, whether it's riding a wave or making good decisions at crucial times. I've got some ideas.

Catch Courtney and the rest of the Top 17 competing Maui live daily from November 23 - December 5.

27 legends of surfing come out of retirement next week in Azores to fight for the ultimate surfing crown in over-45 and over-55 categories.