Tour rookie Ryan Callinan is currently sitting at 9th place on the Qualifying Series rankings, and will need a result at the Vans World Cup of Surfing to secure his place on the Samsung Galaxy Championship Tour (CT) in 2017. We caught up with him in Hawaii to see how he has been approaching the biggest test in his career so far.

WSL: How's the week been?
Ryan: It's been an interesting week. I didn't do well at [the Hawaiian Pro in] Haleiwa, but one of my really good friends, Fred Morais, did great, so that made the blow a bit sweeter. To see him make the top 10 has made it easier. He's now in the exact position as me, so it feels I am not alone in the whole process. Callinan's edge work is often overshadowed by his air game, but he sends regular reminders of his credentials. - WSL / Kelly Cestari

With such a big event on the horizon, what's been your day-to-day approach?
The waves have been small, which makes it harder to stay motivated. It gets fairly repetitive on the North Shore in these conditions as you see the same people and watch the same waves. I've been staying active, but it's been tricky to break up the days and stay fresh. However, knowing that there are waves coming and that we'll be put out in good waves helps the focus.

Have you been able to freesurf Sunset at all?
I've tried surfing Sunset a few times to try to get out there and find a rhythm, but I didn't enjoy myself at all. I was trying, but it is completely different surfing it at one foot to surfing it at 10 feet, so there is no comparison and it is almost pointless to try. Having said that the last day of the Haleiwa competition it was really good out there and I had a couple of surfs, so that was a good warmup.

Callinan having a moment.
0:35
The Australian rookie pulled out all the stops against John John, taking their Round Three match to the wire.

Are you comfortable out in the lineup?
I have surfed it loads, but I wouldn't say it was one of my favorite waves. However, as long as there is swell, it's a fair place to decide the qualification spots. It brings out both the flaws and the best in people's surfing, so it's a great arena. 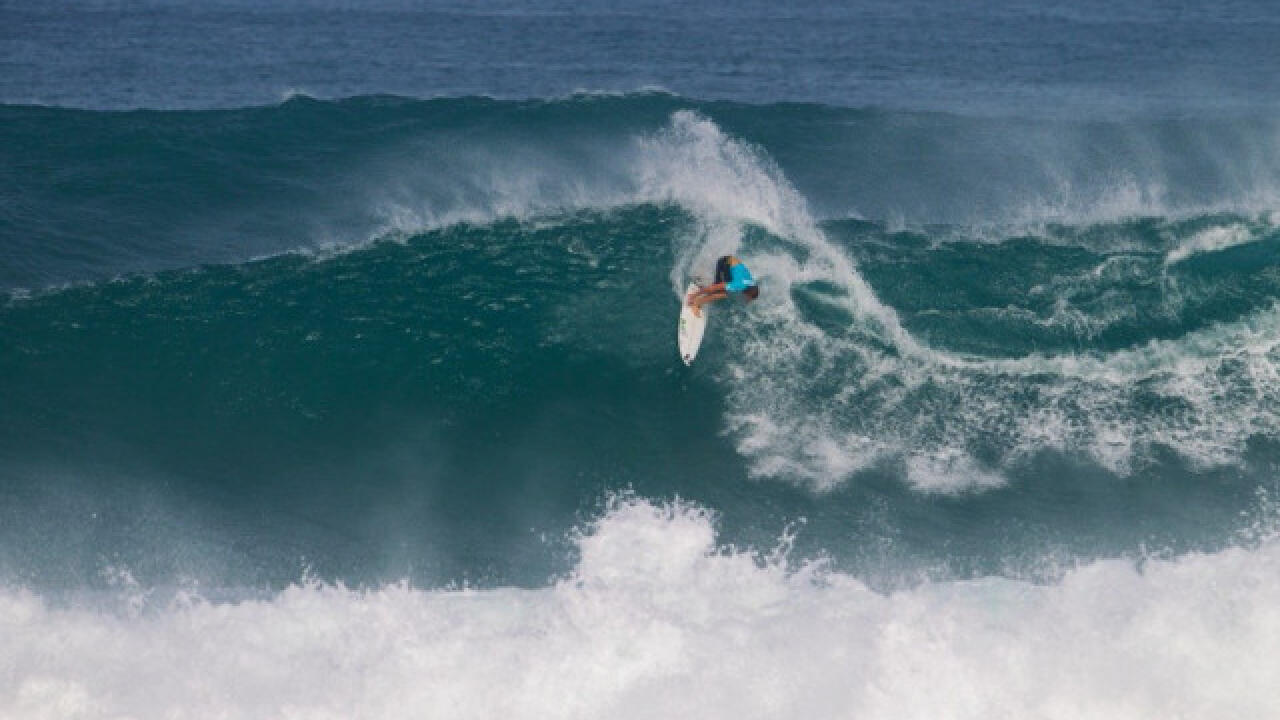 Callinan tears into Sunset a few years ago. - WSL

How much have you been thinking about whether you'll either requalify or not next week?
Everyone tries to block it out a little bit, but it's definitely there. No one wants to dwell on the negatives and everyone wants to be positive, but it's on the back of everyone's minds. Personally it's been a long end of the year for me. I've been away for three months and won't get back until Christmas, so I've had my own battles to try to stay motivated and keep everything together. Do you get help with that?
Yeah for sure. I've talked with my coach, Dog Marsh, and my manager, Mick Lowe, who have both been in this situation. I've also spoken to a sports psychologist. From those chats the approach has been to try and not worry about the outcomes. I need to concentrate on my performance by trying to be in the moment. As the pressure builds, though, it's easier said than done to block it out, but that's the key to surfing at your best in the heats. Performance-wise, have you been happy where you are at?
Yeah, for sure. I think even from the start of this year I have improved tenfold. I feel I have been surfing well, but that sometimes it hasn't just fit in with the 30 minutes of the heats. I've been happy with my preparation, and while I've had issues with my execution, I've had some good moments. I just need to keep plugging away, and hopefully if I get another shot next year, it will all be a bit different.

Watch Ryan and the rest of the competitors when the Vans World Cup at Sunset gets going, starting live daily at 8:00 a.m. HST.