Sure, the heat-sheet for the Billabong Pipe Masters is tough, but even scarier is the lineup for the Trials into the event. It's a literal who's who of former Pipe Pro and Pipe Masters winners, local underground chargers and unknown Qualifying Series sluggers. The opening round of the 2015 Billabong Pipe Masters In Memory of Andy Irons was completed in eight-to-ten foot, testing Pipeline conditions. - WSL / Kelly Cestari

Every heat is stacked and while a few dozen men might enter, only two men leave. Kind of like the Thunderdome, but with Jamie O'Brien, Mason Ho and Jack Robinson in your heat. Good luck with that one!

But when it comes to the Trials, not everyone knows their Eala Stewart from their Marco Giorgi. Some names are notorious…some are hard to pronounce. Regardless, here's a taste of seven guys you'll see in the Trials on December 8. 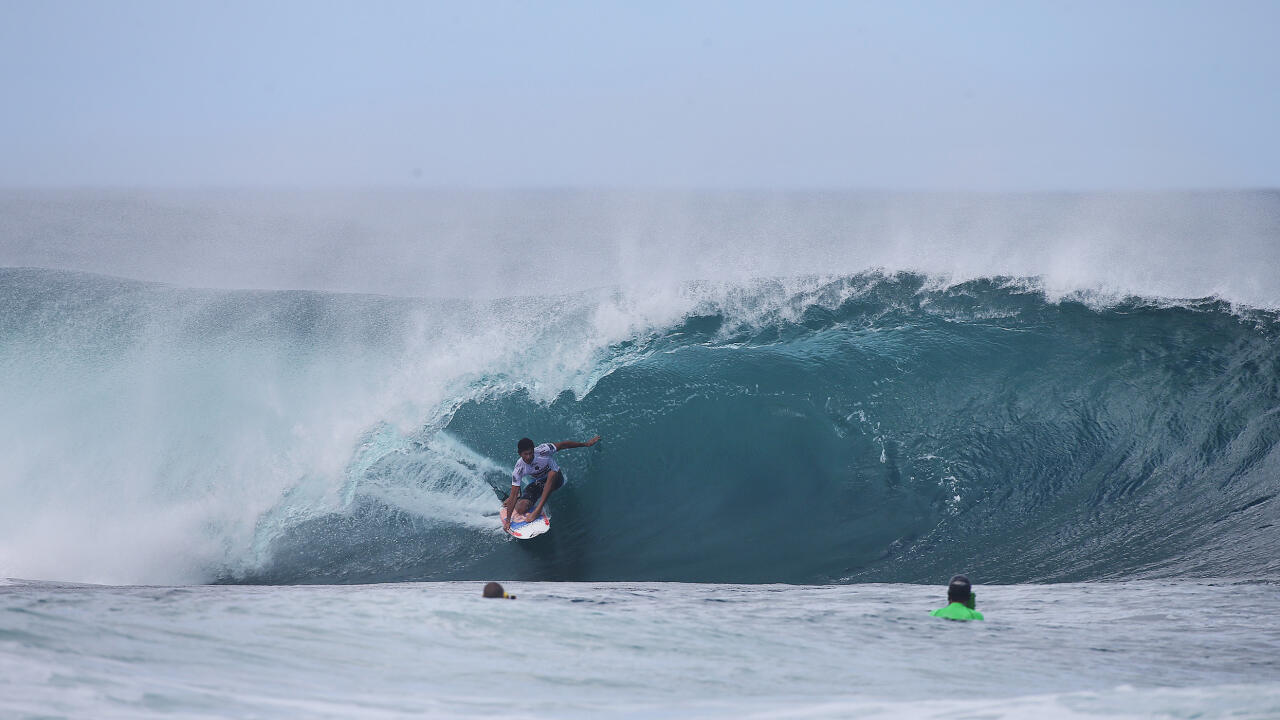 Bruce Irons: Like you don't already know who Bruce is… Former Samsung Galaxy Championship Tour surfer, 2001 Pipe Master, 2x Pipe Pro winner and brother of the late, great Andy Irons, Bruce is always a threat in the Trials. As one of the most casual, experienced surfers out at the wave, Kauai's Bruce Irons is just as deadly dragging his butt going left as he is frontside at Backdoor. His style is the kind that the best of the best try to emulate out there. Jack Robinson: Perhaps one of the most talented, young surfers in slabby waves of consequence, during the Pipe Masters Trials last year (which Jack won), his comfort in serious Pipeline was astounding to witness. The West Oz phenom looked like a young A.I. out there and mowed through a field of Pipe's finest to secure a slot in the main event. Makai McNamara: A young North Shore local, son of Pipeline specialist Liam McNamara and nephew of big-wave madman Garrett McNamara, Makai made a huge splash earlier this year in the Volcom Pipe Pro, placing third. Known for turning on bombs mid-heat, Makai will have his work cut out for him in the Trials, but his local know-how will surely help. Mason Ho: Son of 2x Pipe Master and living legend Michael Ho, nephew of Pipe Master/World Champion, Derek Ho, and brother of Women's Samsung Galaxy Championship Tour warrior Coco Ho…yeah, it's in the blood. Call it what you will, Mason recently won the HIC Sunset Pro and is a consistent finalist in each year's Volcom Pipe Pro, proving he's got the chops to hang with the elite out there. He's also one of the most unpredictable and entertaining surfers on the North Shore, so watch out for some comedic cross-step floaters or head-checks when the jersey's on. Eala Stewart during a recent trip to Rangiroa. - WSL

Eala Stewart: Another young North Shore local who has put his time in and is working his way up the Pipeline pecking order. While Eala might not have the heat experience that some of the other guys do, the talented, smiley goofyfooter at least has some home-court advantage over the visiting Trialists. Jamie O'Brien during the Semifinals of the 2015 Men's Pipe Invitational. - WSL / Kelly Cestari

Jamie O'Brien: 2004 Pipe Master, Pipe Pro winner, actual Pipeline resident, there's really only two other men on earth that can give J.O.B. a run for his money out there: John John Florence and Kelly Slater. A true Pipeline specialist in every sense of the phrase, Jamie doesn't surf the wave -- he plays with it. Finn McGill is enjoying a breakout year in 2016. After turning heads at Sunset he's hoping to do the same at Pipe. - WSL / Kelly Cestari

Finn McGill Raised on the North Shore of Oahu, Finnegan Thunders McGill (his actual name) is a hungry young local threat. Son of a North Shore lifeguard and brother to girl-wonder, Dax, Finn is already making a huge splash in the surf world's biggest pond with a 4th place Final finish at the Sunset HIC Pro. He followed up with two strong performances at the Hawaiian Pro and Vans World Cup. Known for his mature tube-sense and penchant for Backdoor growers, Finn could cause some upsets.

Watch the trials live on the WSL app and website starting with the Dawn Patrol show at 7:30 a.m. local time Thursday, December 8.