Ethan Ewing had a remarkable, breakout year in 2016. A year ago, anyone who lived outside of the Queensland, AUS, bubble would have had a tough time pulling Ewing out of a police lineup. At 17, he had just finished his last year of school and was embarking on his final season on the Junior Qualifying Series (JQS). Ewing will be bringing his act to the Championship Tour after just one full year on the Qualifying Series. - WSL / Kelly Cestari

Today, he's the reigning World Junior Champion and a 2017 Championship Tour (CT) rookie after finishing his first full year on the Qualifying Series at No. 2. Not bad, considering his primary goal last season was earning enough points to gain entry into the QS10,000 events this year.

Naturally, we're all trying to figure out how this mild-mannered kid from North Straddie pulled such an amazing feat. I've had the good fortune to spend some time with Ewing over the past few weeks, first in Hawaii and then at the World Junior Championships in Kiama. I put him through the standard media grilling that all rookies can expect from the prying media. Though he's as shy as kids come these days, he's extremely polite. And after cracking the shell, I discovered a few revealing things about his character. Here are three of my biggest takeaways. He's mature beyond his years

Maybe because he lost his mother when he was just five years old. Or because his two older brothers are ten and eleven years older than him. Or maybe it's because his father -- a fireman -- is someone very capable of always putting things into proper perspective. But all these ingredients have certainly helped give Ewing a more mature outlook on learning and life. Take, for example, his feelings on school:

"I really miss school," Ethan says. "I didn't do the homeschool thing and I'm glad I didn't. I grew up on an island, so I took a ferry to the mainland and back everyday growing up. I went to the same school my dad went to. I still get to see my mates who live on the island, but I really miss my mainland friends. We have it so good in school, but we don't realize that until we get out." Ewing is a keen listener, and it's a huge part of his success. - WSL / Ed Sloane

Ethan's success last year has plenty to do with a hot-burning inner-fire. If he appears fresh it's because he is still very keen. Ewing hasn't spent the last decade surfing contests every weekend. In fact, he didn't really start competing year 'round until he was 15 years old. That's allowed him more time to refine the creative aspects of his surfing.

"I wasn't one of those kids who grew up traveling and competing in an event every weekend," Ewing says. "I really only surfed in about two comps a year until I was 15. One of them was a local contest on the Goldy and the other one was more of a club challenge down in Lennox Head. But when I was 15 I qualified for the Queensland Title and ended up winning it, so that's when the idea of getting on Tour someday really took hold." 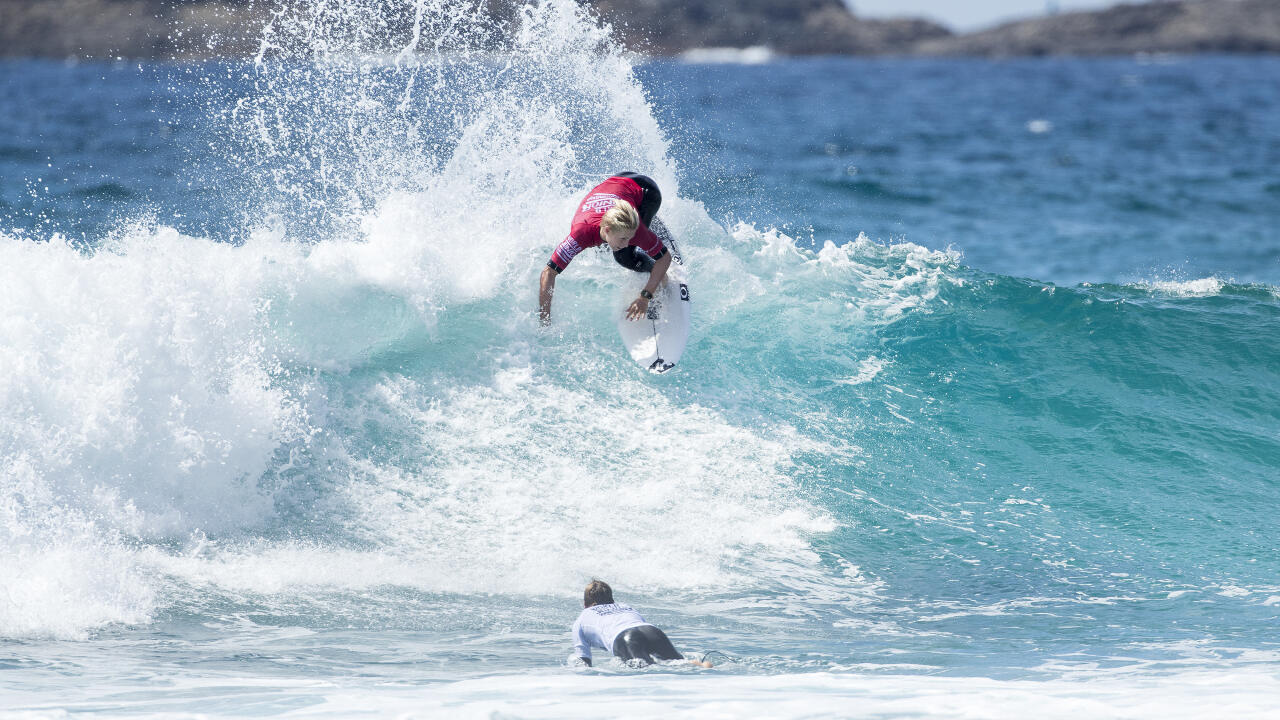 Now 18 years old, Ewing is starting to fill out. He added about 15 pounds of muscle to his growing frame in 2016 and seems to be embracing a Mick Fanning-like fitness routine. Surfing is something he's taking very seriously now. That said, part of that process involves making sure that he's keeping it fun.

"My dad is my biggest supporter, by far," Ewing says. "And the only thing he tells me before heats is, 'Just go out there and have fun.' Which I love, because you can definitely forget why you started surfing if you don't. It can be hard to do when you're getting beat up, but everyone feels that...If I'm having a bit of a shocker I usually grab some kind of fun board and find my mates and that does the trick." Ewing's openness to input has led in part to his tremendous success. - WSL / Kelly Cestari

Don't let his shyness fool you

Ewing is a very soft spoken young bloke. Some might even mistake him for being painfully shy. But there's nothing soft about his approach. He tends to move around with a high degree of certainty both in the water and out. Deep down he believes he's right where he should be.

"Yeah, I don't say much about what I'm feeling, but I'm definitely pretty confident in my abilities. I've always backed myself and believed in my surfing. Am I surprised being where I am? Well, not really. I guess I'm just surprised by how fast it's happened."