The feeling on the beach before a heat hardly ever changes. Butterflies the size of bats torture your guts, churning stomach acids burn the back of your throat. Veins on your forehead bulge from your face. Your mind races. But once you hit the water, there's a release. Arm and back muscles relax, adrenaline pumps through your body like a teenager crushing 20-ounce cans of energy drink. You've got this. It's Pipeline, it's the Volcom Pipe Pro, embrace the moment and make your mark. Or, as former Pipe Master Johnny-Boy Gomes famously liked to say, "Do something!" And at the 2017 Volcom Pipe Pro, Soli Bailey did just that. It wasn't a waltz, but he won every one of his heats on his way to the biggest win of his young surfing career. It's a commendable feat considering that the VPP -- an event stacked with a big percentage of the top Pipe specialists in the world -- might be more difficult to win than the Pipe Masters. 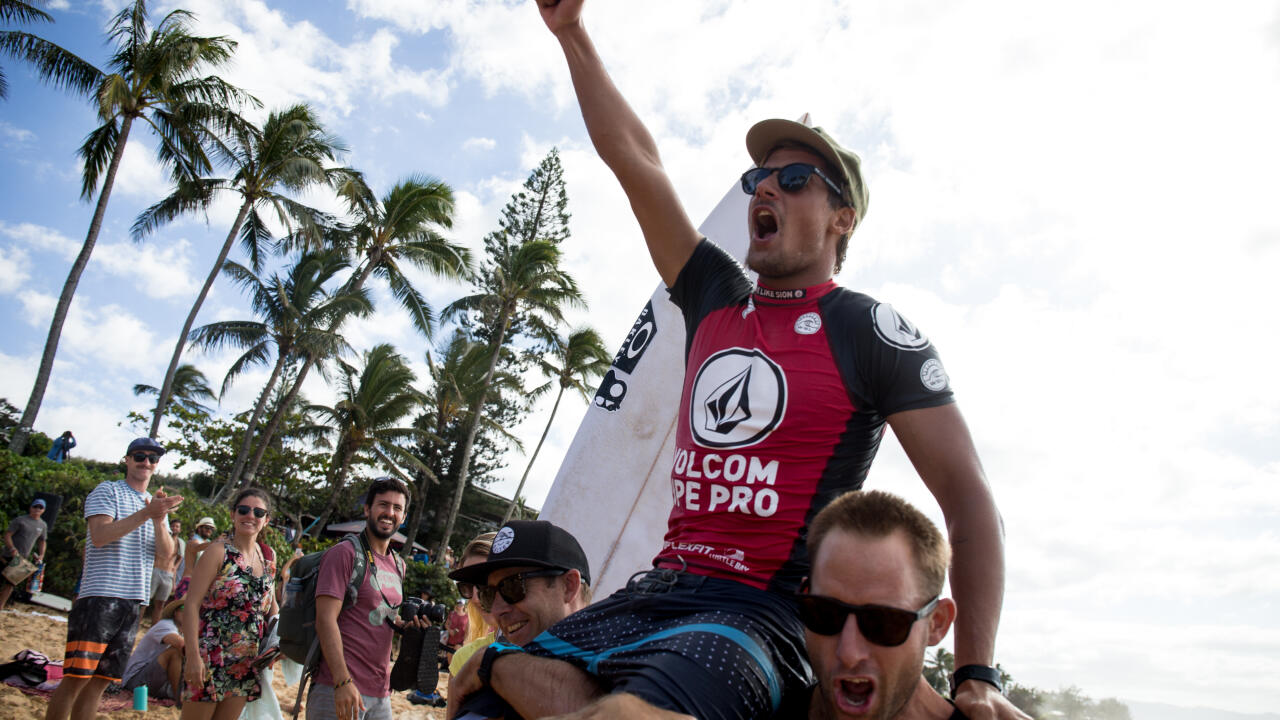 The 2017 Volcom Pipe Pro Champ gets chaired up the beach. - WSL / Tony Heff

After eight years, the Volcom Pipe Pro finally has a champion who's not named Slater, Florence or O'Brien. Keeping in mind that those three surfers might be considered top of the heap from this modern era at Pipeline, that's quite a scalp for a 21-year-old from Byron Bay, Australia (he's also the first Australian to win the event). Bailey, who's never finished higher than No. 18 on the WSL Qualifying Series (QS) rankings, has staked his claim as a serious contender to join the 2018 WSL Championship Tour. With deteriorating conditions affecting the VPP's final day, John John Florence admitted to the webcast audience that it was probably time to switch gears between rounds to a more turn-based approach. The tactic didn't work out for the reigning World Champ, but JJF can still change direction better than most. With the possible exception -- and a special nod of appreciation to Dane Reynolds -- does anyone on the planet have a better buried-rail, drop-wallet speed hack?

When you grow up in Pico Alto, Peru, like 21-year old Peruvian starlet Miguel Tudela did, there's no shortage of giant waves and hollow lefts. Head over to the Interwebs and Google-search-it-dot-com "Cabo Blanco" for more on its grinding left tubes. Now the site of the WSL's Big Wave Tour event, Pico Alto is notoriously shrouded by a dense fog that only adds to the mystery. Tudela's talent, however, is not mysterious. Following a 4th-place finish at the 2017 Sunset Open QS1,000, he made an impact at the VPP before going down in Round Four, pocketing a 17th into his QS-points bank book. The allure of an empty Pipeline peak, fantasy and reality colliding at 1000psi. Is there another wave on the planet that can consistently elicit this nauseating concoction of fear and adrenaline in front of a roaring crowd mere yards from the beach? Tyler Newton charged like a man possessed in the stacked, eight-man Last Chance Qualifier held on Day 2 in gut-wrenching, below-sea-level conditions. The contest's format, in which the best single wave of the heat wins it, eliminated any shred of the traditional "build a house" contest formula. The result was a storm-the-castle-or-bust approach. Newton, delicately stair-stepping his way to an impressive win. A recurring theme continues to emerge year after year at the Volcom Pipe Pro -- the inevitable elimination of local favorites in an unusual fashion. Be it a confounding tactical error, a strangely wave-starved heat or the outright flash of unexpected brilliance from an underdog, the VPP once again proved elusive to many hometown heroes. North Shore prince Mason Ho went down in Round Four, but he still laid down a stylish track along the way. When addressed from this angle on the beach, Backdoor looks achingly playful. If you squint your eyes just so, it could be a hollow, mainland Mexico beach break or some seagrass-covered slab in Sumbawa. Ah, but the ugly truth is revealed from the water. Anvil-shaped chunks of menacing reef lurk inches below your fingertips upon paddling out, sucking and boiling each imperfect foil as it heaves its final load of energy onto the Polynesian land mass. Here, Kaimana Jaquias draws a high line while keeping his eyes peeled for the doggie door at Aints. Hawaii's outer islands continue to churn out world-class surfers at an alarming rate. Raised on Kauai's northwest coast, Koa Smith is the latest to emerge from a region that's produced an impressive number of Championship Tour surfers, including the groundbreaking Irons brothers, Sebastian Zietz and Alana Blanchard. Smith made it clear during the 2016 Triple Crown that he's all-in on taking a meaningful run at the WSL Championship Tour in '17. A beauty and a beast, some deep Pacific blue rolls through untouched. - WSL / Keoki Saguibo

The many shades of Pipe returned to the Volcom Pipe Pro this year, playing out like the box of chocolates line from Forrest Gump. A mixed bag of swells, wind and sand bars revealed Pipe's fickle face, changing daily from classic, glassy peaks to a mutant, bottomless righthand point break, back to punishing, thick tubes and finally to a reef-covered, rippable beach break. Ever the chameleon, Pipe cranks out a cobalt blue wall looking eerily reminiscent of Fiji's Cloudbreak. Puerto Rico has long served as a primer for the North Shore, especially for locals like Brian Toth. Blessed with plenty of reefy tubes and punchy North Atlantic swells grinding down the eastern seaboard of Mainland USA, the Caribbean island grooms a strong contingent of gutsy chargers. No longer just a bit player at Pipe, Toth has a reputation as a talented stand-in for the regular heavies who routinely pluck the best waves on the best days. Yet, after years of taking the punishment of settling for mostly leftovers mixed with an occasional nugget, a chance at Pipe with just a few other guys reveals a talented bench percolating just under the surface at the world's most famous wave. Toth, bubbling up during Round Four before going down in the Quarterfinals due to an interference. Naysayers be damned, the kid just continues to prove that he's got the form, flash and function to produce top-flight performances in heavy conditions. Combine that with his superior technique in the junky stuff, and Griffin Colapinto becomes the OC's latest enfant terrible -- the West Coast's best bet to bust down the CT door. With the possible glaring exception of the anomalous Dane Reynolds/Bobby Martinez/Timmy Curran wave that blitzed the scene in the 2000s, California just doesn't send tribes of QS qualifiers onto the CT in the way that hordes of Australians and Brazilians ransack the Top 34. California's youth movements tend to be leaner by comparison. But, after an extraordinary display at the Triple Crown in 2016, Colapinto's 3rd-place finish at the VPP and 2nd at the 2017 World Junior Champs shine a bright spotlight on San Clemente's next big thing. There was a nearly tangible moment following the second Semifinal at the VPP when Bruce Irons looked like a sure bet to take the win. Moments earlier, he casually daggered his way into a Pipe gem, earning a nearly 9-point ride that could easily have gone higher on the scale had he not made it all look so damn easy. Unfortunately, Irons could not carry his momentum into the Final, but he cemented his rep as the most stylish backsider to go left at the Pipeline. Despite an unceremonious Round Four exit at the VPP, it's been a pretty spectacular winter for Koa Rothman. There's his win at the Da Hui Backdoor Shootout that was capped by a wave could be a serious contender for a Wave of the Winter award, not to mention countless outstanding performances at Pipe. Rothman carries the weight that comes with his surname with confidence, humility and quiet intelligence. It's a lot to live up to when your older brother Makuakai is a Big Wave Tour Champion and your father Eddie's a North Shore legend. No longer a grom, Koa handles it all with an easy grin and charm that comes from growing up surfing along the most intimidating stretch of coast in the world.