"I've probably been the only guy that has consistently said that if it's not 10-foot, then I'm not getting out of bed."

That line in the sand (or the water) is perhaps why surf filmmaker Tim Bonython, 58, has become a legend in his milieu. Bonython got the bug for big-wave documentation when he was on hand to witness the huge swell at the Rip Curl Pro Bells Beach in 1981. He has been at the forefront of the sport ever since.

Check out this year's Ride of the Year nominees

"I play my movies in the cinemas and that niche has kept me alive in the business for 35 years," he said. "And because I show my films to people in the cinema, I know what they want to see. It's big waves, that's what really gets the emotions flowing." Tim spends a fair chunk of his life on the back of a ski. Above, he was capturing Mark Mathews at The Right. - WSL / Russell Ord

His films like Biggest Wednesday, Black Water: The Story of a Place Called Teahupo'o, and Immersion, to name just a few, have time-capsuled big-wave surfing like few others. One thing that sets Bonython apart is that he doesn't chase a story or a budget, but goes after the biggest swells at the heaviest waves on the planet.

"Getting on that boat, and shooting 30-foot Teahupo'o, well, there is nothing more exhilarating," he said. "You get the chance to capture surfers getting the waves of their lives, which is a real privilege. And if you bag it right, and capture a piece of history, then I am just as stoked and excited as the surfer. What I really love to do is document moments in big-wave history that are definitive." With his new movie, The Big Wave Project; A Band of Brothers, Bonython has accumulated all those moments of history over the last 10 years. "Because the sport has evolved so much, and because I'd been on hand for most of those key swell events, I decided to make the definitive story about big wave surfing over the last decade," he said. With groundbreaking footage from locations such as Shipsterns, The Right, Cloudbreak, Teahupo'o, Pe'ahi, Maverick's and Nazaré, to name a few, Bonython had a difficult task to try to find a single thread that tied all these events together. Tim has been documenting Shipsterns for more than 10 years. - WSL / Tim Bonython

"Along with my editor, Jason Muir, we put all our cards on the table and in the end there was two key incidents that crystallized what big-wave surfing is all about," he said. "The first was Aaron Gold's wave at Peʻahi last year. That was the biggest wave ridden in what I believe was the biggest swell episode in the last decade."

Six months after that wave, Bonython was at Cloudbreak when Gold nearly drowned.

"When I saw him walk up the beach unaided, it blew my mind. Twenty minutes prior the guy was dead. I realized that without the band of brothers, there would have been a tragedy. These big-wave surfers are constantly looking after each other, and when the shit hits the fan, they will always will have each others backs. So that's the crux of The Big Wave Project." 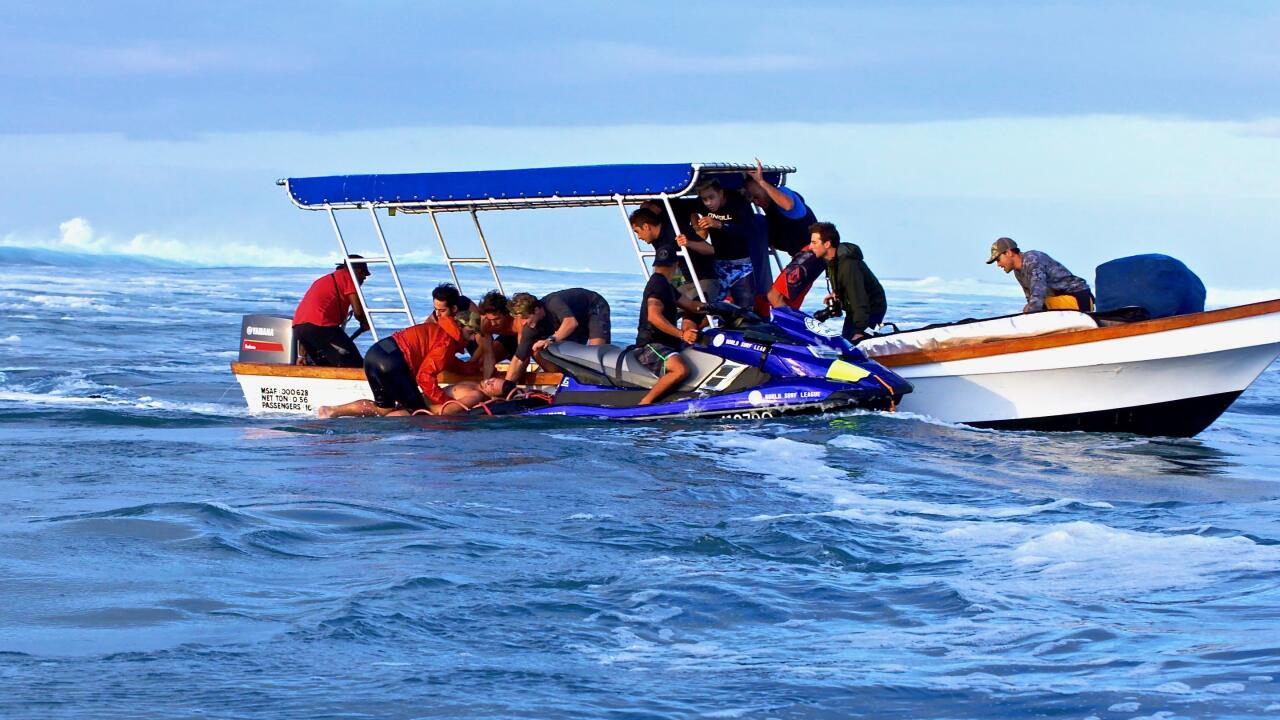 Tragedy was averted due to the efforts of Gold's big-wave community. - WSL / Tim Bonython

Bonython has self-funded the The Big Wave Project and will take it on the road when it's ready. The movie is slated to premiere at the Australian Surf Film Festival in May, and then will headline the Maui Film Festival in June.

"This is the film I had to make," Bonython said. "This is what I love to do."