The WSL Hawaii/Tahiti Nui region resumes its 2017 event schedule in Rangiroa, a remote chain of islands in the Tuamotu archipelago of French Polynesia that offers world-class waves, for the Air Tahiti Rangiroa Pro 2017. A Men's QS1,000, the competition has a holding period from March 6 - 10 and features a collection of banner athletes including defending winner Kai Mana Henry (HAW) and local threats Taumata Puhetini, O'Neill Massin and Tereva David.

While the Air Tahiti Rangiroa Pro is relatively new to the regional lineup, it easily proved its value for surfers last year by delivering countless barrels and excellent opportunities for skill-sharpening, point-accrual and prize money. The cultural exchange that was shared amongst local and traveling athletes also added to the positive experience, and surfers are eager to return to the island for a repeat of good surf and international adventure. Last year's standout performers, Henry and Finn McGill (HAW), return to Rangiroa after going head-to-head in the Final and demonstrating their ease in high-performance, high-wager waves. McGill went on to enjoy a stellar season in Hawaii with a win at the Pipe Invitational and a podium finish at the HIC Pro QS3,000 in 2016. The teen also finished third in the world at the Junior Championships this January and followed up with back-to-back second place finishes at the Sunset Open QS1,000 and Sunset Pro Junior JQS1,000.

Henry, who shot up the regional rankings after last year's win at the Rangiroa Pro, went on to compete in a few more events at home in Hawaii including the Vans Triple Crown, but left his marquee performance in Tahiti. At 38 years old, the Maui local remains in the competitive limelight on Oahu's North Shore and is enthusiastic about opening his campaign again in the French Polynesian islands. 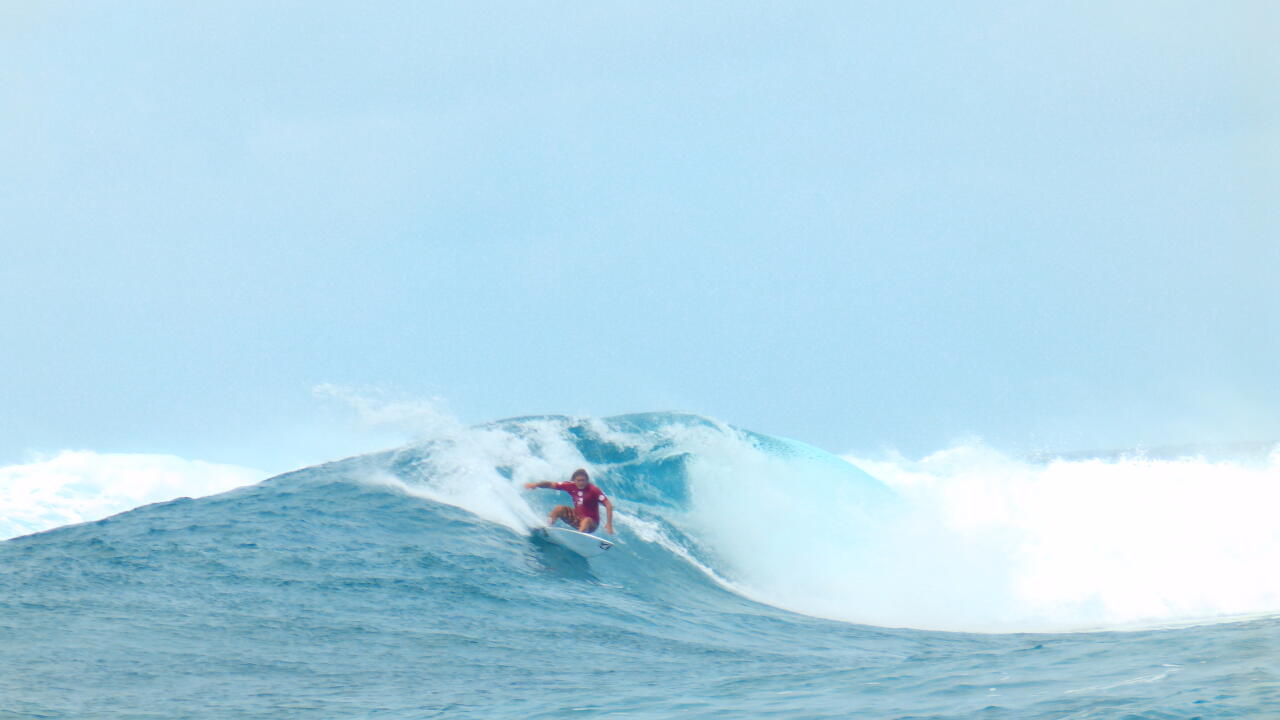 Henry en route to the podium during the 2016 Rangiroa Pro Open Final. - WSL

"I'm feeling great about returning to Tahiti, my boards are feeling better than ever and I've been surfing a lot lately," said Henry. "I can't wait to see all the Tahitian people and hopefully score some sick waves." The surfer prepares for upcoming competition by putting in time at his local breaks, including the infamous right-hander of Pipeline.

"I surf Backdoor a lot, which is a lot like Rangiroa," Henry continues. Both waves drain off a shallow reef and produce hollow barrels that demand fine-tuned technique for critical drops and calculated surfing. "There's a few waves around the North Shore that are similar to Papara too, so I feel pretty comfortable at both." McGill and Henry help make up the 65-man field for the Air Tahiti Rangiroa Pro, which highlights 65 percent Hawaii competitors and 25 percent Tahitian. The other countries represented in the event include Chile, Peru, Portugal, USA and France, many of which will also be competing at Papara from March 12 - 18 for the various WSL-sanctioned events on the main island of Tahiti.

Once Rangiroa completes, surfers will head to Papara where two new events have been added to the WSL's regional lineup: a Women's QS1,000 and a Men's Longboard LQS1,000. The uptick in competition will round out the week-long surf festival to include five sanctioned events including a Men's QS1,000 and a Men and Women's Junior Pro JQS1,000. "The Tahitian Surfing Federation is truly excited to add two new events, a Women's QS1,000 and a Men's Longboard QS, at the beautiful venue of Papara," said Lionel Teihotu, President of the Tahitian Surfing Federation. "This addition reflects our commitment to the development of surfing in our region and offers the opportunity to our women surfers and longboarders to measure themselves at an international level while gaining ranking points."

The Papara Pro events kick off with the Pro Junior starting March 12 - 18 and continue with the Men and Women's QS1,000 and Men's Longboard LQS1,000 from March 13 - 18. Situated along the black sands of Papara, the punchy beach break is a great venue for the mixed level of athleticism and leads with a fantastic display of traditional dance, music and culture during the opening ceremony.