The anticipated swell that was forecast began to show its form on finals day of the Ron Jon Vans Pro and Pro Junior to determine the 2017 Champions -- and fireworks followed. Florida's own Evan Geiselman put on a Ron Jon Vans Pro jersey for the first time and had the Atlantic Ocean on his side throughout the day to claim a win for the East Coast over Californian Jordy Collins.

But, it was West Coast domination in both the Pro Junior Men event as Ryland Rubens claimed his maiden WSL victory over an in-form Tommy Coleman, John Mel, and Luke Gordon. Alyssa Spencer tacked one more for California and back-to-back wins at this When the final horn of the day sounded on the Ron Jon Vans Pro Men's Qualifying Series (QS) 1,000, it was Geiselman who emerged victorious for the first time at this event over talented up-and-comer Jordy Collins. The New Smyrna Beach-native blasted the highest single-wave score of the event, a 9.33, in the Final on his forehand and had Collins in a combination situation with no waves coming to the Californian's aid.

"I came here looking for some momentum and to really get some heats under my belt so I couldn't be happier," Geiselman said. "Being able to post some excellent scores like that makes you feel good about your surfing and know you're doing something right. While it isn't a big win in terms of points, it's great to get this win just down the road from my own backyard and have everyone's support. The goal is still there to be in that qualifying picture at the end of the year so I'll be getting on it again this and hope to find some great results." A goofy showdown between Geiselman and an on-fire Vero Beach, Florida talent, Tommy Coleman, heated up in the first Semifinal with Coleman looking to upset the seasoned QS competitor. But, it was Geiselman who shut the door on his fellow Floridian with an 8.83 to take the lead in the dying minutes before a massive Final.

"That Semifinal was probably the biggest test of the day after yesterday's smaller conditions," Geiselman added. "This is a great confidence booster toward those higher-rated events in Barbados before heading to Japan, and then on to Ballito so this year is already taking shape. Last year I really wanted it and I enjoyed it, but I also learned a lot and you that's what you have to keep doing." Runner-up Collins had a brilliant run of his own at this event that led him to a big Semifinal draw of his own and outperformed one of Round Three's standouts Joh Azuchi in defining fashion. Collins earned a 7.33 on his third wave to put Azuchi in need of an excellent 8.19 that the Japanese contingent was unable to attain. But, the 1,000 points were not meant to be for the 18-year-old emerging QS competitor.

"I didn't come into this event with a lot of expectations since I've never been a super [QS] grinder kind of surfer, but once I got here and got on my board it was just magic so I knew it'd be a good event," Collins said. "After that I was just amped to be getting good scores and I was super stoked with how today went. This will be my first full year on the QS so I'll do the Jack's Pro in a few weeks and then head down to Barbados before getting into some more events this year -- really looking forward to it." 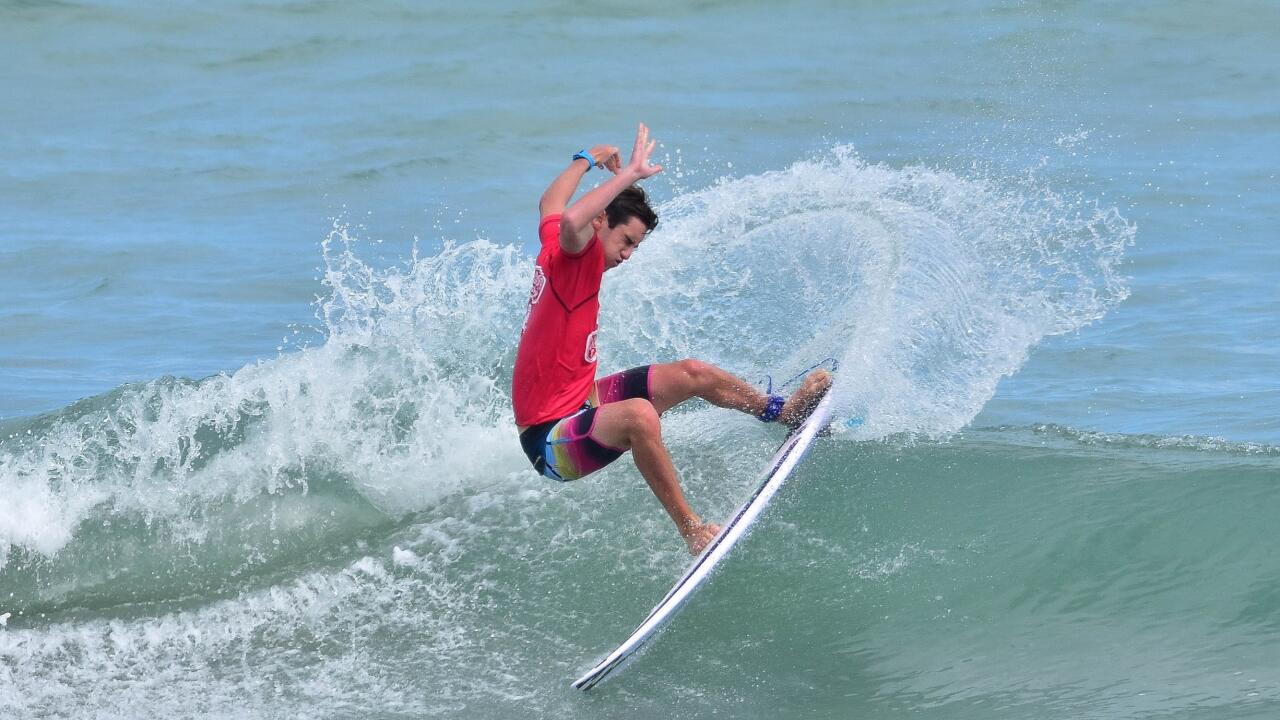 The 2017 Junior Tour season opener finished with an impressive from Ryland Rubens who, after blowing up in the Semifinals, continued his explosive surfing into the Final for his first-ever WSL win. Rubens took control of the Final right away with an 8.50 and though he had an entire heat to fend off his fellow competitors, he kept his composure and finally found the long-awaited breakthrough.

"I got a lot of Semifinals last year and it was just eating away at me to not punch through to a Final," Rubens said. "But, this was just such a fun event and the waves were on my side today -- just felt like I was in a really good rhythm. The waves picked up for us and after that Semifinal I didn't want to jinx it, but luckily it translated to another big heat. It's all about having fun for me even though I'm definitely wanting to go for it all this year and getting this win really helps that goal." The presence of Coleman was continually felt throughout the day with a big Semifinal performance of his own and looked unstoppable until matching up with Rubens. Coleman represented well for his home state, topping Californian John Mel and South Carolina-native Luke Gordon -- both who looked dangerous throughout the final day. "I couldn't believe the day I had with making it to the QS Semifinal and then the Junior Final," Runner-up Coleman said. "Starting with that Quarterfinal, I've looked up to Noah [Schweizer] for so long and then getting to surf with Evan [Geiselman] was incredible. I'm still young as well so to make it this far in these events means a lot to me for experience and can't wait to have some more fun the next few years."

Alongside Coleman in his Semifinal, it was Gordon who earned a place in the Final on his last scoring ride in that heat to contest for a title against Rubens, Coleman, and John Mel. Mel also had a nail-biter of a heat that witnessed him turn in a 7.07 on his final scoring wave to solidify himself into his second Ron Jon Vans Pro Junior Final. Alyssa Spencer successfully defended her Ron Jon Vans Pro Junior Women's Title with a phenomenal display of power surfing in the Final. The Carlsbad, Calif. surfer smashed an 8.17 to take the lead from Leilani McGonagle and never looked backed -- tacking on a near-perfect 9.17 to put her competitors into a combination situation. The 13-year-old will celebrate her birthday on March 13th and, once again, with a big victory to start the North America Junior Tour season.

"I'm over the moon right now, it's so amazing to get another win here," Spencer said. "Leilani [McGonagle] got off to a good start, but I knew I could do the same thing if the waves came so I'm stoked a few more sets showed up in that heat. My goal is definitely to make Worlds again, but it won't be easy with these girls pushing their surfing and it's going to be an exciting year. I'm glad I won this one since I know it will be really hard to find another win." 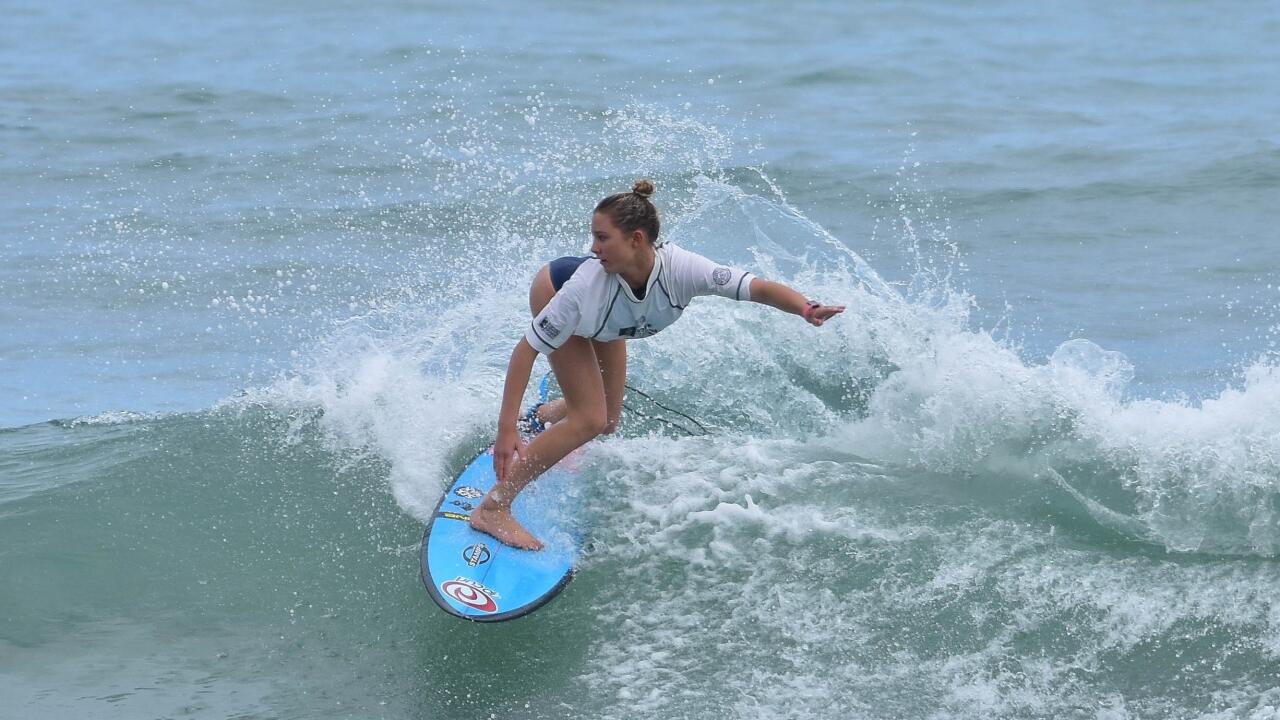 Runner-up Samantha Sibley dealt with McGonagle in a tight Semifinal heat, but not nearly as close as the fourth finalist Kirra Pinkerton -- who earned a 7.40 in the fading seconds of her Semifinal heat to advance on. But, it was Sibley who came away with the valuable 750 points to start the 2017 season over Pinkerton and last year's runner-up McGonagle.

"This is great to start the year out with a Final and end up getting second-place so I'm really excited," Sibley said. "I really want to make it into the World Junior Championships and this result will help that so much. It's cool knowing I still have five years left on the Junior Tour and I can build on my surfing throughout that time, and just have fun with it. We'll see how it goes with everyone looking tough so I can't wait to see what this year holds." The next North America Men's QS event will be the Jack's Pro QS1,500 in Huntington Beach, Calif. March 31 - April 2. The North America Junior Tour will be back in action this summer with the fifth anniversary of the Los Cabos Open of Surf June 6 - 11.

This day, and every day, the WSL is working to ensure that Surfing is for Everyone.

Celebrating its 17th lap around the sun, International Surfing Day is about much more than catching a few waves together.