PNG's own Titima Mange nearly created an upset for the history books with this barrel ride in elimination Round Two. - WSL / Andy Carruthers

First blood was drawn at the Kumul PNG World Longboard Championships after men's Round Two contested vital matchups from some of the world's best longboarders. The righthand reefbreak of Tupira was relentless once more with pumping morning conditions that slowed from hollow barrels to strong open faces for style and progressive combinations to be unleashed.

Australian Jared Neal found the morning's gem that allowed him to disappear completely behind the curtain and make a nearly impossible exit as the final section clamped down in the dying minutes. The wave gave Neal a massive sigh of relief, and a near-perfect 9.17, with local PNG wildcard Titima Mange right on his tail with a 7.40 on a barrel of his own after narrowly missing an exit on what could've been a 9.00. 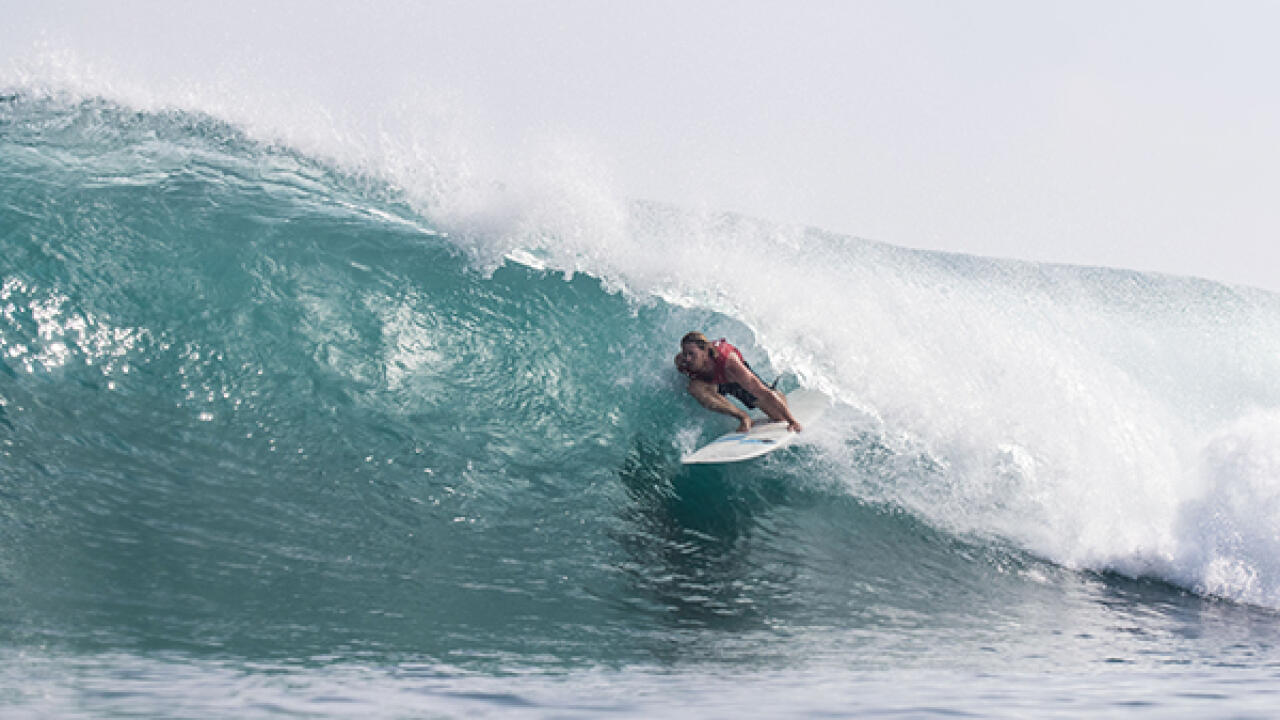 "It was such a good one that I could see from the start of the wave and knew it would be a nice one," Neal said. "I had couple earlier in the heat that sort of pinched me, but that one I was able to hang on and get nice and deep. We had a great time out there talking a bit about what we do and next thing you know he drops that 7.40. It was super good though even if he had me a bit stressed, he's a great guy in this amazing venue." The crowd came out to support their local contingent in force once again as Round Two got underway. - WSL / Andrew Nichols

Just prior, Brazilian Jeferson Silva came out victorious in his dual with Tupira's Akun Alois and eliminated the PNG-native who walked away with a smile on his face after making one last historical appearance. Though Neal had the barrel of the event thus far, Tony Silvagni got to work with a combination of style and progressive maneuvers that had judges rewarding him a 9.00 and 8.33. Silvagni has yet to crack into the latter rounds of a WLC event, but will be one to watch here in PNG after performances like today.

"That was just incredible, I didn't make it past Round Two in China and I just really wanted to make that last heat," Silvagni said. "The crowd's amazing, they've been hanging out here in the heat all day and Papua New Guinea's just a special place. Every heat counts and going into the next round I have to surf smart and choose the right waves." 15-year-old Kaniela Stewart showed he's up to the challenge at PNG and upset higher-seeded surfer Aurelien Meynieux in a close heat. The Hawaiian showed a combination of stylish hang-tens directly into a deep bottom-to-top turn maneuver that had everyone's attention.

"That was so much fun out there and I couldn't be more stoked to make it into the next round," Stewart said. "I was definitely a little nervous going into that heat against Aurelien [Meynieux] because he surfs so well, but I just stayed focused and tried to keep my head in the heat. This atmosphere is incredible, I'm completely blown away by all the people coming down to watch and cheer us on, it's great." Aussies Jack Entwistle and Nic Jones battled in the last heat of Round Two to finalize the Round Three match-ups. In the end, it was Jones who topped his compatriot with a powerful approach to critical sections of the wave.

"It was a little rough to pull Jack on the draw, but I've never surfed a man-on-man heat with him so it was a bit nerve-racking knowing how well he surfs," Jones said. "We had a lot of fun out there though, there were heaps of waves coming through that heat and we just had a ball. I was trying to keep my speed up and get those nose-rides, and just try to link it all together." Tune in live tomorrow at 8:00am AEDT to witness more of the Kumul PNG World Longboard Championships at the beautiful righthand reefbreak of Tupira at www.worldsurfleague.com or by downloading the WSL App. Tomorrow's call will determine if either men or women's elimination Round Three match-ups get in the water.