Today the Martinique Surf Pro was a million years away from its usual friendly vibe, warm-water and long easy waves, familiar face. Instead, surfers rocked up to the point in the dark early this morning to find huge six-to-eight foot wave faces and the occasional ten-foot bombs.

The Frenchman from Reunion Island caught a big break in the Australian leg with two back-to-back equal 5th places as a relatively unknown guy on tour. Sitting 3rd currently on the global Qualifying Series, you'd think pressure could come in the way of continuing performances, but Jorgann demonstrated the exact opposite with an inspiring performance for his spot in Round 4. "It seems everything's going my way in this first half of the season, I've got a new sponsor, I'm getting big results, I feel great mentally and physically," Jorgann said. "I'm so motivated right now, I want to show the people at Soöruz who support me that they've made the right choice. I've still got some tricks in the bag so hopefully I can continue like this. I'm looking forward to slightly smaller waves so I can push my surfing even more."

Imaikalani Devault and Weslley Dantas surfed arguably the event's biggest heat so far and engaged in a back-and-forth battle of huge scores, ultimately won by Dantas with a near-perfect 18.14 out of 20. Sprays don't get much bigger than Dantas' - WSL / Poullenot/Aquashot

Noe Mar McGonagle and Alejo Muniz answered with an equally impressive display of power surfing. The two regular footers displayed matching power carves but ultimately McGonagle's flair got the nod with an incredible 9.17 and 8.50. "Conditions were amazing, on the QS we don't get a lot of waves this size so I'm really happy," Noe Mar said. "Alejo's surfing is really solid, he was so quick to get two scores. We've had some good battles before and I'm glad to surf against ex-CT surfers it's always a great experience. This big open-wall right is great, you just want to be in the right spot, not too behind or too forward and put your turns in the sweet spot to get huge scores."

One of the leading stories today was the success of a new generation of Peruvian athletes, advancing through the rounds at Basse-Pointe and upsetting some of the event's high seeds in the process. Peru has groomed champions of the sport before, Sofia Mulanovich, Piccolo Clemente just to name a couple, so it shouldn't be such a surprise. But this new wave of athletes impresses by the numbers and the level of freakish talent displayed. Adrian Garcia and Joaquin Del Castillo were two of the form surfers in that crew today.

"We're a solid group and we push ourselves to do our best constantly," Joaquin said. "We have solid waves in Peru too so I feel comfortable out here. We're all good friends but obviously if we have to surf against each other later, we'll all fight for the win!" "A few years ago Miguel (Tudela) used to travel alone, now we're all together on the QS and it's great to support each other," Adrian added. "Miguel is kind of the dad of the group, he's the one booking all the hotels, the one who drives and cooks for us aha. He's the one winning heats as well so showing us a great example."

Home away from Home ??

You wouldn't pick a surfer from Newquay, England to do well on a tropical pointbreak pulsing eight-to-ten foot bombs, and you'd be wrong! Dillon proved you can mature your surfing anywhere on earth and perform in the right conditions on the day. The powerful regular foot sneaked two super critical turns in the pocket and managed to stay on his feet for an 8.83 and his spot into Round 3. The Englishman lays into a sick turn - WSL / Poullenot/Aquashot

"I'm a bit of a bigger guys so it's good to have some power," Luke admitted. "I went for the first turn and almost fell, I laid back a little bit and recovered and I thought, right I just need to land a second turn. This is the first heat that I've made this year so hopefully it's just a start in this comp."

Swell heights are expected to maybe drop a little bit in size by tomorrow, which could mean exceptional conditions for Day 3 of the Martinique Surf Pro. Surfers will reconvene at 7:30AM Monday for a call to decide of the day's schedule. 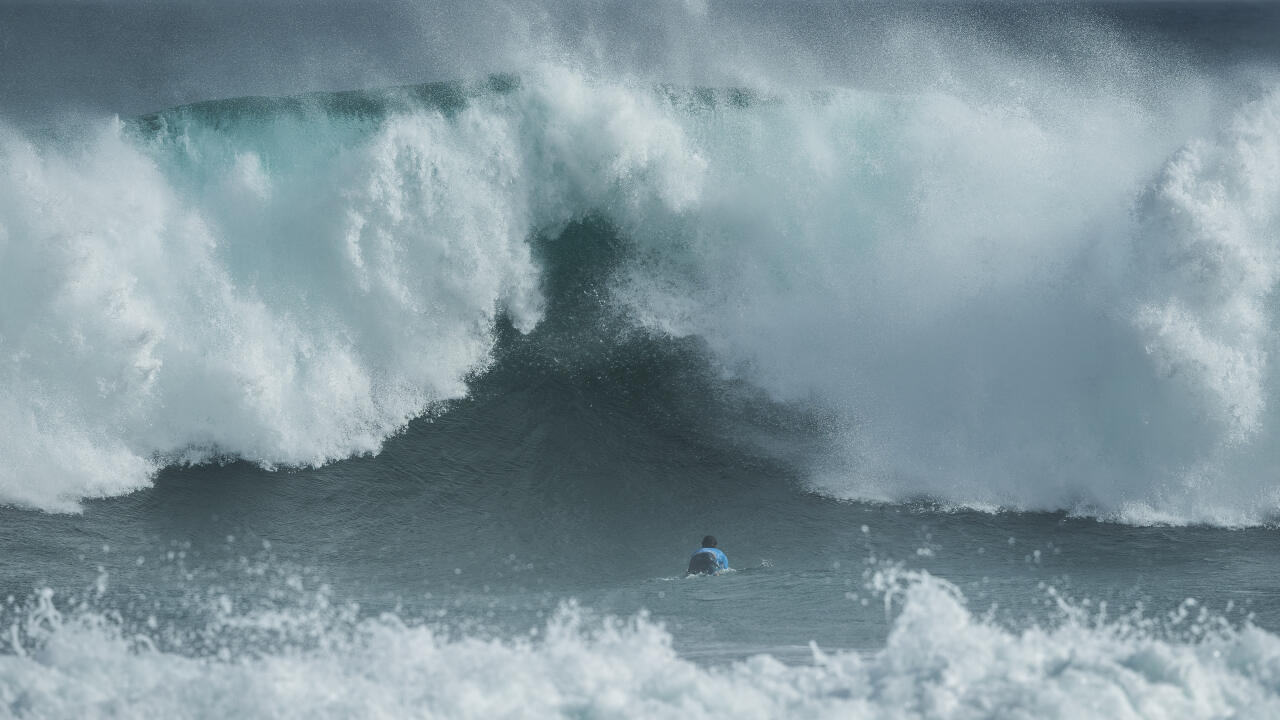 All results, more photos and daily highlights are available here