It's hard to argue against the biggest headline of the year so far on both the men's and women's Qualifying Series as the feel-good story of Jesse Mendes. The rangy goofyfooter from Guarujá, São Paulo, Brazil, shot out of the gates like a cannon during the 2017 Australian leg, spinning and threading his way to a victory at the Australian Open of Surfing QS6,000 and a 2nd at the Maitland & Port Stephens Toyota Pro QS6,000. Last year, on his third lap grinding through the QS, Mendes finished in the unlucky No. 13 slot, an unenviable position just outside the cut. He only about 1000 points shy of qualification for the Championship Tour (CT).

But, for his efforts during the Australian leg, Mendes got the invite to pull double duty at the Drug Aware Margaret River Pro. Based on his strong performance, he was granted a valuable wildcard seed for Margie's. And Mendes took full advantage, winning a Round One heat in cooking conditions at North Point, while clocking valuable time surfing against the world's elite. Mendes has the unique experience of traveling full-time on Tour with his girlfriend Tatiana Weston-Webb, who currently sits ranked No. 12 on the women's CT. Looking solely at his results so far, with 10,400 points coming from just two events, he's nearly a lock to make the cut. If the arbitrary threshold to qualify in 2017 is a median number of 19,000, he'd only need to average approximately 2800 points from his three remaining keeper results. Based on those numbers, he and Tatiana could be spending even more time together next year -- only it'll be on the WSL's Dream Tour. Mendes and Tatiana Weston-Webb enjoy a minute of down time in Cascais, Portugal. - WSL / Poullenot/Aquashot

Another familiar face, former women's CT surfer Claire Bevilacqua has been up to her old tricks on the QS this year. Bevilacqua, like Brazilian Silvana Lima and American Lakey Peterson, is credited with being one of the first female surfers on Tour to really push progression. Her signature frontside ollies and fin ditches helped reconfigure women's modern technique. Bevilacqua was on the CT for several seasons, until falling off in 2012. 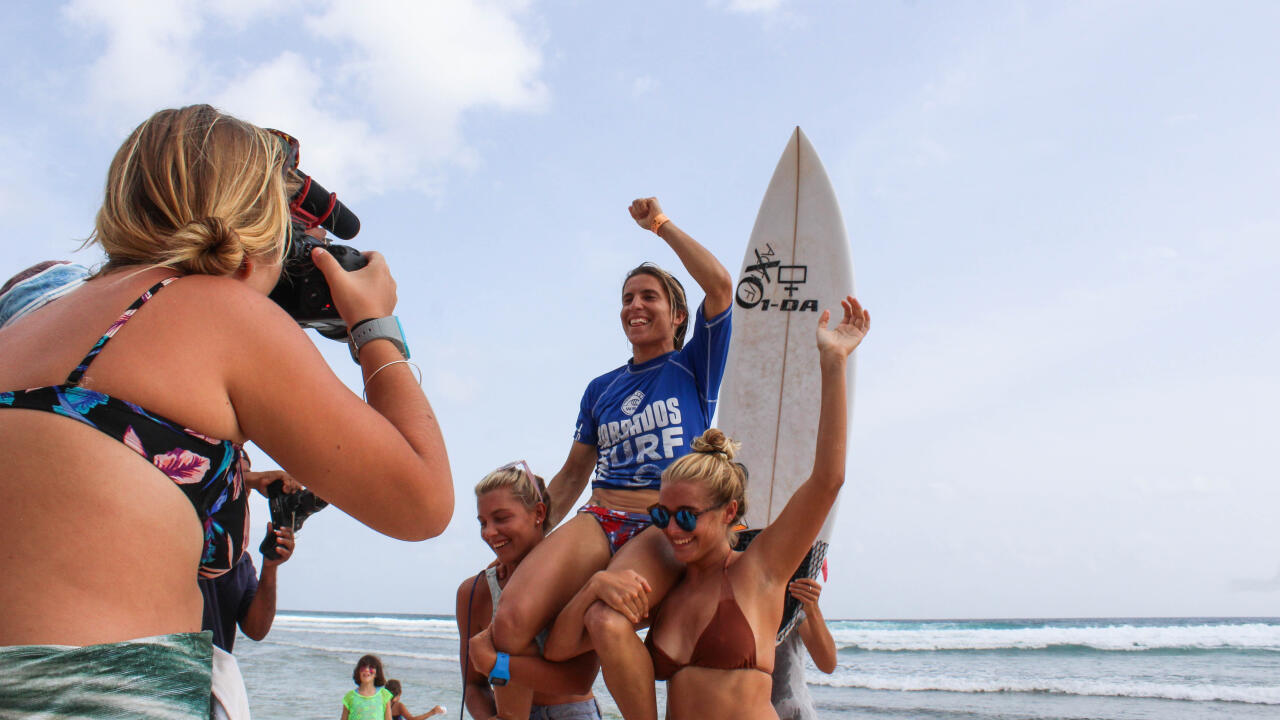 Chaired up after her win at Drill Hall Beach, Barbados. - WSL / Andrew Nichols

That same spark, however, just landed the woman from West Australia in the winners' circle at the Barbados Surf Pro. Although the waves at Drill Hall Beach didn't quite fire on Finals day, "Bevo" was able connect the dots on a few Caribbean crumblers with her speedy, vertical attack. "The younger generation makes me want to be better everyday," said a clearly excited Bevilacqua after her win at Drill Hall Beach, "and I'm just going to keep doing this until my back gives out or I'm back on Tour." She's also got a 9th at the Girls Make Your Move Women's Pro QS 6,000 and a 2nd at the Komunity Project Central Coast Pro QS1,000 under her belt. Bevo's clearly found that fighting spirit again, but the question remains: will she climb back on Tour?

Hawaiian Pride is strong in the form of Keanu Asing. A person of less mental fortitude than Asing might not have taken dropping off the CT following only his sophomore season with the same of level of humility. It's the action of a person of conviction and faith, at peace with how the cards fell during his two years on Tour. "I'm not even thinking about the Tour that much. I just want to enjoy surfing heats," said a reflective Asing, following his win at the Barbados Surf Pro QS3,000 in April. "The pressure's not on me, it's on everybody else. He might not be feeling the heat to jump back on the CT, but the young man from Honolulu has been on a major roll this spring. He's small but he's strong, and he's doing Town and the South Shore proud with a pair of QS titles. All with two-thirds of the season still remaining. Asing also took down the win at the QS1,000 Komunity Project Great Lakes Pro at Boomerang Beach (northeast of Newcastle) in February to go along with his 1st-place finish at Soup Bowl two weeks ago.