Highlights: French Surfers Dominate Finals Day in Biscarrosse.
2:29
The Junior Pro Biscarrosse culminates on finals day with a dominant effort from the French contingent and the victories of Kauli Vaast and Maelys Jouault.

Once again, competitors braved the storm to fight for the event title. People flocked to the top of the dune as soon as the weather cleared, and gathered to watch the event's finals on Labor Day. The huge swell and outgoing tide forced all four men finalists to stay on the inside of the lineup where wave selection was the key to successfully generate speed and unleash powerful maneuvers in the committed sections.

A back-and-forth battle between Kauli Vaast and Marco Mignot was first led by Mignot who had a quick start with average scores on the board. The two surfers exchanged wave after wave, as Vaast gradually turned the situation to build a strong 13.34 combined heat total and eventually claim a career-first victory on the Junior tour.

"The contest was good, we finally got waves at the end," Vaast said. "It was freezing, I usually surf in warm water, but when you start competing on the professional tour, you need to adapt to any type of conditions. I scored a good right-hander with a few turns. My other good wave was a long left with a good ramp and I landed a reverse air. I'm really happy with my surf today. Congratulations to all the boys. We were all in the same situation and winning today has been a big challenge for me." 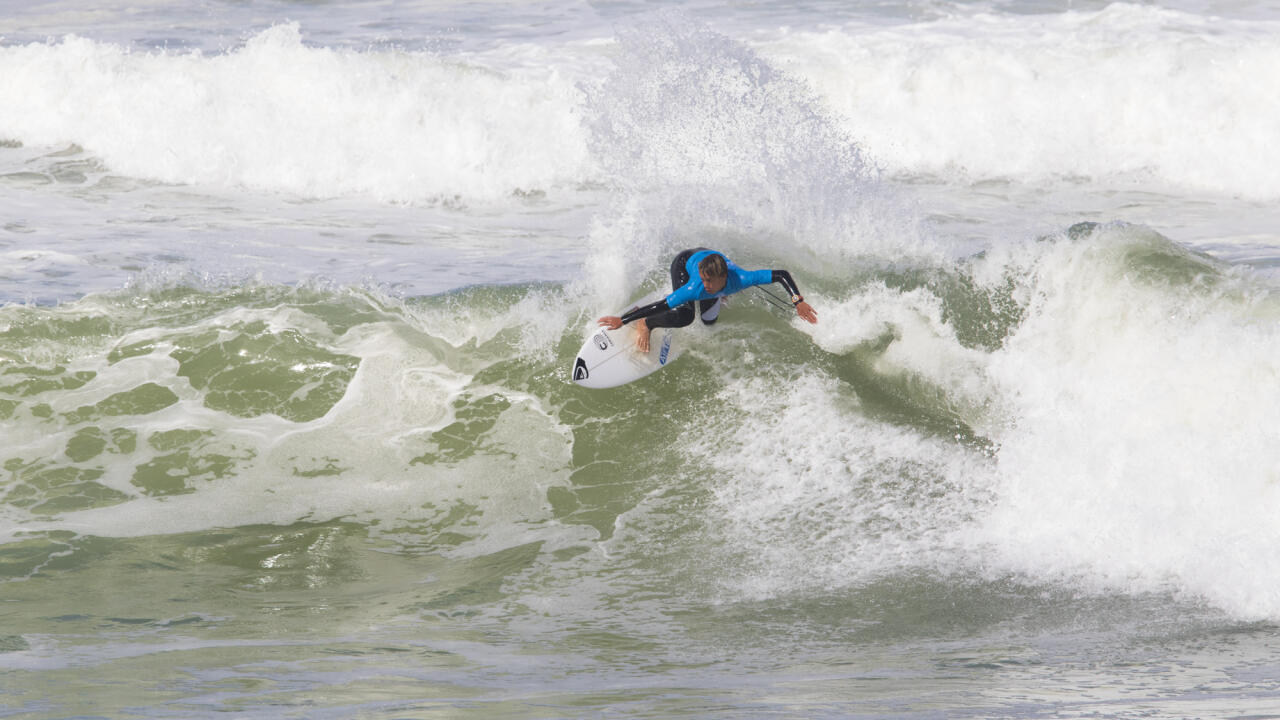 Vaast on one of the best scoring rides of the Final. - WSL / Guillaume Arrieta

With a second place in Caparica earlier this month and his win in Biscarrosse today, Vaast moves up to the pole position on the European Junior Qualifying Series rankings, halfway through the 2017 season.

Marco Mignot continued to look for waves with a good scoring potential up until the final horn blew, but couldn't quite push his maneuvers enough to score the near-excellent 7.51 required to overtake Vaast. Mignot placed runner-up and improved on his fourth place in the previous Junior event in Portugal, to jump into third on the current regional junior rankings.

"I'm really disappointed," Mignot admitted. "The waves in the final were really tricky and I didn't manage to do what I wanted to. I haven't been feeling good physically this weekend, so I am still happy to make it all the way to the final and finish second." Mignot blows the tail but is stopped in second place. - WSL / Guillaume Arrieta

In the women's 25-minute final, Brittany's Maelys Jouault managed to overcome a rough start and got extremely busy, surfing 11 waves in total. Her strategy paid off as she claimed the highest total heat score of 12.50 for her own first-ever win on the Junior QS tour and an impressive leap up to second place on the European rankings.

"Looks a lot like the usual conditions at my local spot so this morning I was not too worried about getting out," Jouault said. "It's big, windy and very difficult to find the good waves. I was lucky to catch my good waves early on cause in the second half of the heat I didn't get much. I never thought I would arrive in the final rounds of the competition, but I'm working a lot on this with my coach. I'm super happy to get the win here." Juliette Lacome claimed the Final's highest single score, an impressive 7.50 for a long wave surfed all the way into shore with commitment and energy. Unfortunately the young French surfer was unsuccessful in backing up this big score to try and overtake Jouault, ultimately placing runner-up in Biscarrosse.

"Conditions were really tough, but considering the forecast I think we're kind of lucky to be able to even finish this afternoon," Lacome stated. "I'm a bit disappointed but still really happy, I was feeling good on my board. My goal is to finish in the Top 5 at the end of the season. I'm going to do all the Junior events and try my luck at the Pro Anglet in August because that's my home spot, I want to get more experience and improve my surfing." Juliette Lacome showed great potential and will be a threat in the remaining events of 2017. - WSL / Guillaume Arrieta

The best European under-18 surfers will now have about seven weeks to reset, get back to training and prepare for their next stop in the regional Junior Qualifying Series, the Junior Pro Espinho, from June 22-25, 2017 in Portugal.

The second European Junior stop gets underway in tiny surf in France.