Editors Note: Championship Tour vet Michel Bourez has once again turned some heads with a very acrobatic stall technique which utilizes his entire back leg, behind the tail of his board. It isn't the first time Michel has pulled this trick out of his bag. In fact, he used it with great success in Fiji, back in 2017. Below is a breakdown of this long-forgotten technique's history first published in 2017, particularly its popularization by by Aussie goofyfooter Neal Purchase Jr., who was renowned for his backhand tuberiding at Kirra back in the 90s and 00s.

Most of the progressive advances these days are centered around acrobatic aerial maneuvers. But during his Sunday heat at Cloudbreak, Michel Bourez revealed an updated version of a long-lost backside stalling technique once popularized by Aussie goofyfooter Neal Purchase Jr., who was renowned for his backhand tuberiding at Kirra back in the 90s and 00s.

Bourez Gets a Leg Up
0:28
The Tahitian updates a classic stalling technique to maximize his tube time at Cloudbreak.

Purchase was an early advocate of using every imaginable body part for stalling purposes, including hands, butt, and even his back foot. Though a long and lean fellow, he put himself into pretzel positions to stay cleanly slotted in even the smallest of tubes. 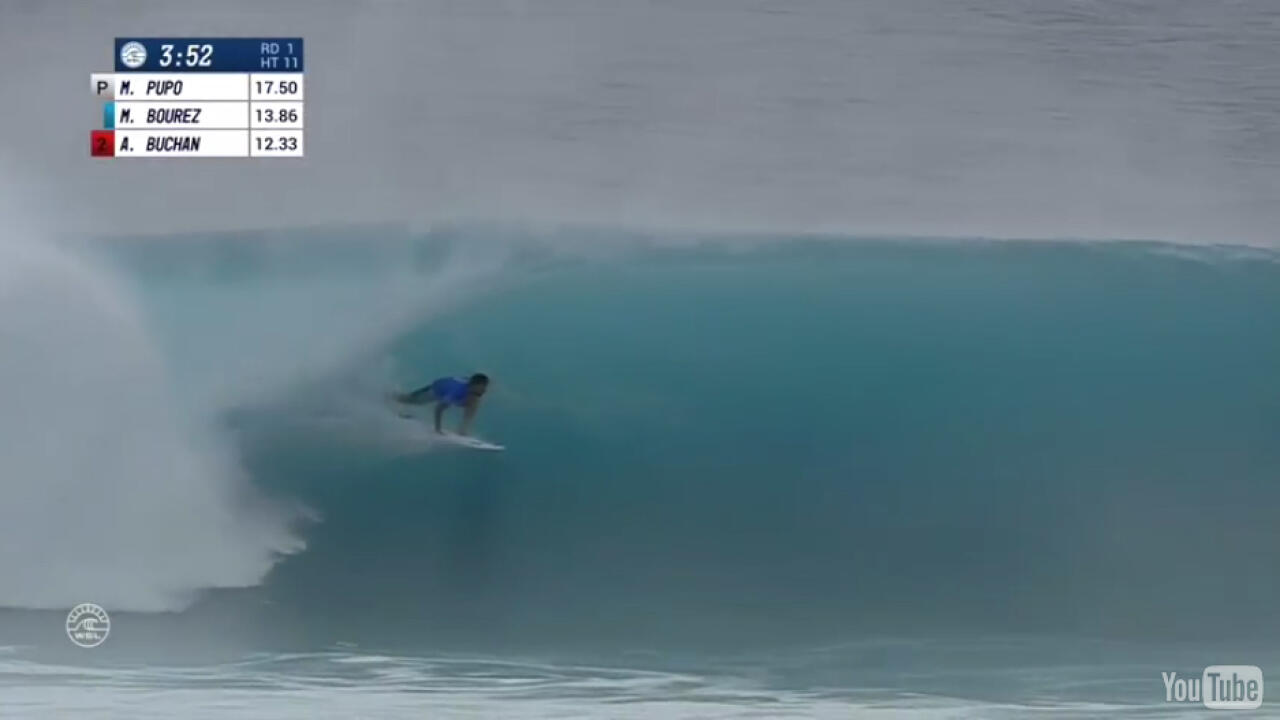 In this framegrab you can see Michel's left leg trailing behind his board. - WSL

Bourez, however, used an updated version of the technique on a Cloudbreak bomb, utilizing his entire back leg behind the tail of his board. He used the trailing leg as both anchor and rudder, somehow balancing just with his front leg on the board. It allowed him to stay deeper in the tube and was critical to scoring a 9.17 for the wave which led to Round One's highest heat total.

The technique was so unique that WSL Commentators Ronnie Blakey and Rosy Hodge initially struggled to get their heads around what had just happened.

"That was bizarre," said Blakey. "It was like it was out of a ballet routine, toes pointed and dragging, it was unbelievable."

"It's the warrior pose," laughed Hodge, referencing the yoga position. "That was so innovative, he's just taken stalling to the next level."

However while it may have taken the commentators, and the rest of the surfing world, by surprise, Bourez revealed he'd used the technique before. "I only do that when the waves are perfect," he said afterward. "Sometimes if you drag your ass in the water it doesn't slow you down that much, so I put my foot in." Bourez put on a backside riding clinic to nab the highest score of the day on Sunday. - WSL / Kelly Cestari

Tahiti has eased its COVID19 restrictions and Michele Bourez has headed straight back into a tropical tube after a month in lockdown.

As a precautionary measure, the Pipe Master has announced his plans to stay home due to the growing COVID-19 situation.