Nikki Van Dijk burst onto the CT scene as an 18-year-old in 2014. Since then she has slowly established herself as an integral and progressive part of women's surfing at the highest level. With 2017 looking like it could be her breakout year, we delve a little deeper into the naturalfooter's world to see what we could uncover.

When Consistency Is A Problem
Until this year Nikki Van Dijk had only made one Semifinal in her Championship Tour (CT) career. That wasn't quite a good enough return for a surfer of her talent, who is now in her fourth year on the CT. Unlike many surfers, consistency has never been an issue for Van Dijk. As an example in her best ever finish on Tour in 2015, when she ended as World No. 9, she finished the year with five consecutive Quarterfinals. This year she has again been solid, with three more Quarterfinals, plus a third in Brazil. "I kinda feel like I get in a Quarterfinal rhythm and, as great as that is, I need more. I need Semi and upwards from now on," she said in Rio. Those results have elevated her to a career high of World No. 6, yet she knows she needs a Final or win to solidify her place in the Top 5. Now only 22-years-old, she's been knocking on the door for a while and it looks like she will bust it down in 2017. Taking it to the next level in Rio. - WSL / Damien Poullenot

Rookie Years Are Difficult, But Nikki's Was More Difficult Than Others
In 2014, aged just 18, Nikki hit her rookie season on the CT ready to take on the world. However a culmination of her youth and injuries conspired to turn that year into a grueling affair. "Being away from home was tough it's a lot of travel when you are 18," she told the WSL last year. "My first year was crazy, I got hurt in Bells, I got hurt in Fiji. And I think that's what a rookie year is, you have to go out and learn how to lose. You learn so much from losing." To her credit Van Dijk didn't miss an event, competed full-time on both tours, and secured her place on the following year's CT through a fifth place finish on the QS. 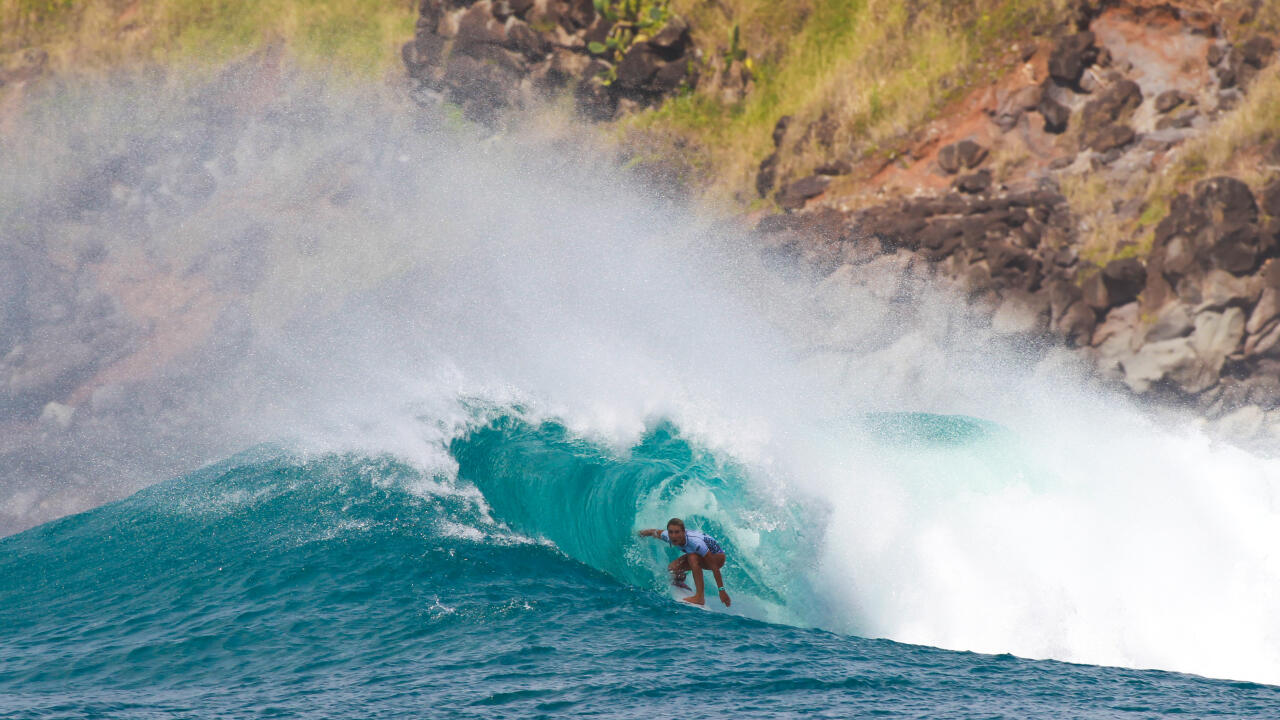 By the end of 2014, Van Dijk was going strong. Here in the tube at Honolua Bay. - WSL / Laurent Masurel

It's All In The Family
Van Dijk is clear that none of her success would have been achieved without the support of her family. Her dad was a keen surfer and taught his eldest daughter Nina to surf at a young age. Nikki, four years younger, followed in her big sister's footsteps and the youngest of the clan, Joe, has also turned out to be a talented surfer. Eventually Nikki's mum, after spending many days at the beach with her family, took up the sport too. Nikki however has taken family support to the next level. Her sister Nina has been her constant traveling companion on Tour since the start and combines the roles of sister, best friend, coach, caddy and nutritionist.

An Original Path To Being A Vegan
There are many paths to becoming a vegan, but most don't involve having your face dragged along the coral at Cloudbreak, as Nikki's does. In her rookie year Van Dijk hit the reef with the resulting impact requiring plastic surgery and 16 stitches to her eye and face. Upon return home she underwent a health cleanse as a part of her recuperation, which led to her turning vegan. Three years on she is still a committed vegan and believes it is one of her keys to her success at the elite level of the sport.

Hurt At Cloudbreak.
2:03
Nikki Van Dijk exited the 2014 Fiji Women's Pro early after hitting the reef, see how she's overcome the fear in 2015.

Flipping The Lens
Nikki is used to having the camera pointed at her. At just 15-years-old, Nikki, along with two friends from her home of Philip Island, were followed by filmmaker Claire Gorman for 12 months for her documentary First Love. Since then modeling shoots have been a regular offshoot to her surfing career and knowing how to work the camera is a key part of that. However increasingly Van Dijk has flipped the lens and now takes her own images of her travels, often using the increasingly rare medium of film. Some of her images end up on Instagram, where her 297K fans can see her natural talent, while many are saved for a photo album that will no doubt reflect a life being led to the fullest and a long and successful surf career.