A dream run on the upgraded World Surf League South African domestic circuit has dropped a packet of confidence in Mikey February's lap, and he utilized it to go all the way through to the Semifinals of the Ballito Pro presented by Billabong. February's Instagram handle is @thevibesrgood and the breezy yet composed surfer has clearly been living this philosophy this season.

February Defeats Mendes in Quarterfinal 1
0:58
Michael February puts a stop to Jesse Mendes' unbeatable run and advances into the semis of the Ballito Pro.

February has racked up three victories in four Final appearances in South African QS events so far. His wins came at the Nelson Mandela Bay Surf Pro, the Corona Durban Surf Pro and the Vans Surf Pro Classic. He finished runner up at the Buffalo City Surf Pro. But his Semifinal appearance in this week's all-important QS 10,000 has shot him all the way up to No. 4 on the Qualifying Series rankings, up 17 spots. As a reward for his hot streak, the WSL Commissioner's office has awarded February the wildcard slot for next week's Championship Tour event in South Africa, the Corona Open J-Bay. Naturally, February would love nothing more than to get payback on World No. 3 Jordy Smith, who ultimately eliminated him in the Semifinals at Ballito.

February acknowledged the defeat graciously, content in the knowledge that a third place result in a Qualifying Series 10,000 event is quite possibly the game-changer he has been looking for. 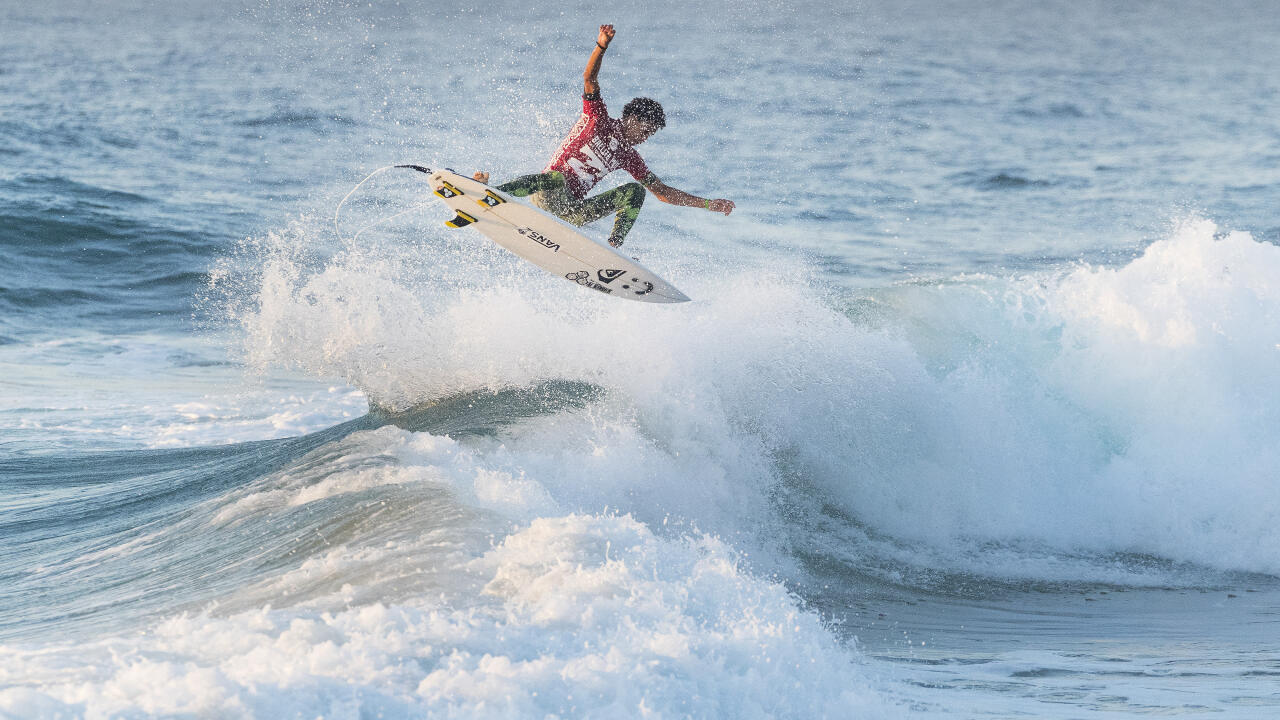 Mikey February has matured as a competitive surfer in 2017, and his performances throughout the Ballito Pro presented by Billabong were inspiring. - WSL / Kelly Cestari

"It boosts my confidence so much making Semis in a 10,000 and I'm looking forward to keeping the positive vibes going, taking everything I learned from this event and just keep it going," said February. "It gets pretty busy now, it's the US Open and after that the European leg so that's my focus now, and then Hawaii. I had some nice words from Jordy after that heat which was really cool from someone I look up to, it gives you that extra push." Jordy Smith's win in the Semifinal against February was the heat that gave him momentum into the Final, and eventually all the way through to the Ballito Pro win. - WSL / Kelly Cestari

Earlier Saturday, in a scintillating start to the final day of competition at Ballito, Mikey was paired up against the Qualifying Series (QS) leader Jesse Mendes from Brazil. Mendes was the last goofy-footer in the event, and the tricky right-handers were challenging in the early morning light. Mikey picked up some ruler-edged mid sized waves on the southern end of the beach, and performed a series of hacks and rail turns to advance to the Semifinals.

Mikey has the full package, with an inspired air game, a solid rail approach and a myriad of man-hacks in his portfolio. As a result of his Kommetjie, Cape Town upbringing, he is also a fan of the bigger surf and never pulls back. The final touch is his previously mentioned competitive prowess, consistently using contest rules and heat strategy to his advantage. All the great stuff that is needed for career success on the premier Tour. February is not scared of high risk moves, and goes for the air at every opportunity he can, knowing full well that these are the moves that win heats and contests. - WSL / Kelly Cestari

At the end of the competitive year last year, Ezekiel Lau was 11th on the Qualifying Series rankings, and after double qualifiers were taken into consideration, he was the last surfer to qualify for the 2017 Championship Tour, with a points total of 18,750 points.

February's point total now is already at 10,550, which puts him in a decent spot with four big QS 10,000 events left in 2017. After the Corona Open J-Bay, February will be heading to California for the Vans US Open of Surfing to keep his QS campaign rolling.

Jordy Smith attacks the lip first and launches into a massive double-grab straight air to claim a 9.73 in the final of the Ballito Pro