"I'll let you know, I'm still working that out," Julian Wilson recently responded to the question of what it takes to win a World Title. "Obviously, you have to win at least one event, and do really well at most of ‘em. I haven't had the best start to be in the World Title conversation, but I don't feel like I've made many mistakes; I feel like I'm competing and surfing well, so I don't have any big regrets so far."

Julian Takes John John the Distance in Last-Minute Exchange
3:42
The Quarterfinal clash ended with two of the most intense final minutes of the event, and the stakes were huge.

Wilson was talking to Surfline at the start of the Outerknown Fiji Pro. By that stage in 2017 he'd racked up a series of average results to create an arithmetic series of 13,9,13,9 that, if it continued, would have him not so much out of the World Title conversation, as barely on speaking terms with the top 10. Not for the first time in his career, his results weren't reflecting his talent. Reaching for the sky in the J-Bay warm-ups. - WSL / Pierre Tostee

It was halfway through that poor run that the 28-year-old dropped his short film Wayward. It was easily one of the best, most progressive edits seen in the last few years. Yet such was the quality of the surfing, from draining Cloudbreak tubes to never-been-seen-before backside tweaks near home, in many ways it further illuminated the gulf between his groundbreaking surfing and his position on the ratings. Locked and loaded in Fiji. It was at Cloudbreak that Julian started his move back up the rankings. - WSL / Ed Sloane

Outwardly, at least, Wilson exuded a sense of calm. In his seventh year on the CT he knew his surfing was on-point and that his preparation was meticulous. He'd been slowly draining the high emotion from his competitive surfing, adding more consistency where there was once frenetic highs and lows. His performances in Fiji vindicated that maturity, a Quarterfinal redirecting his 2017 back into less choppy waters. That result propelled him back into the top 10; the minimum requirement for a surfer of his ability.

His trip to South Africa was crucial, then, if he was to build on his momentum. To be in the World Title conversation, or at least to be in earshot of it, was now possible if he performed at the Corona Open J-Bay. It's well known that he started that week with a hole-in-one, boxing off one of his lifelong ambitions. Then when the swell turned on, Julian went through the gears, his timeless style providing the perfect counterbalance to what was an extended run of perfect J-Bay. 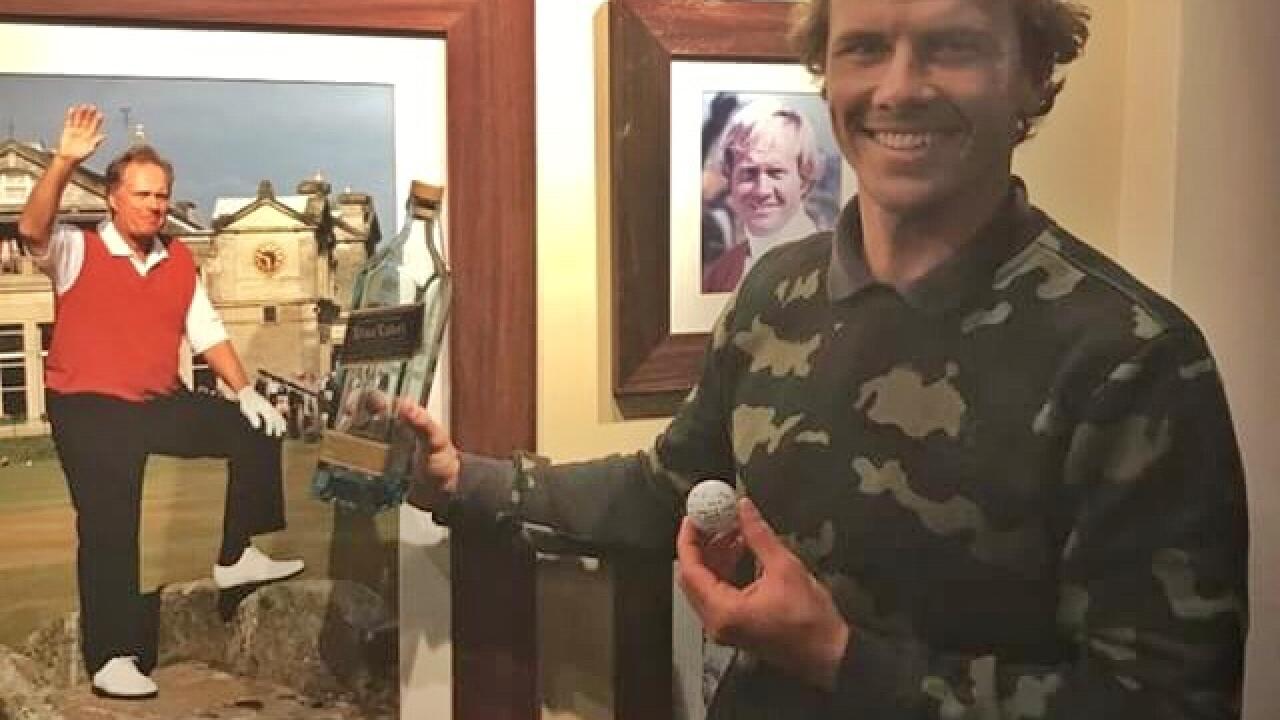 All smiles after his hole in one. - WSL

"It's been one of the best weeks of my life. A hole in one at the start of the week and perfect waves ever since," he said after a Round Three win. "It's been special. I've just been focusing on getting through each heat so I can surf perfect J-Bay with one other guy."

That approach netted him a Semifinal, the third time in the last four years he has made it at least that far at J-Bay. More importantly, it kept him in the touch with the front pack. It's a push to say he's in the World Title conversation, but it did promote him to within striking distance. As he says he'll need to win at least one event to win a World Title, but Wilson's performances at Fiji and J-Bay indicate that he is getting closer and closer to a win in 2017. He's now back where he belongs.

Julian Wilson Responds with His Own 10-Point Ride
2:59
Wilson Perfect 10

The Billabong Pro Tahiti will be his next big test. In his career, Wilson has shown some incredible flashes of brilliance at this venue. Last year he pushed John John Florence to the brink in their Quarterfinal match, but fell just short. He's enjoyed seven excellent-scoring heats at Teahupo'o, and 10 heat wins puts him in the Top 10 category. Yet to date, he only has two 5th-place finishes to show for those efforts. This year he'll be looking to change that.

Tune into worldsurfleague.com to watch Wilson compete at the Billabong Pro Tahiti, which starts August 11. Stay tuned for more updates.