This marks Asing and Guduaskas' second Final together at Virginia Beach when Gudauskas took the victory in 2013. But Asing's incredible start to Sunday's Final left his competitors in a combination situation, meaning they needed two new scores to total Asing's, right out of the gates. Asing's formidable backhand continues to win him events after winning at the lefthand reefbreak in Barbados. - WSL / John Ferguson

Asing posted a 7.33 (out of a possible 10) and backed it up with a near-perfect 9.00 just minutes later to start his Final campaign. The 24-year-old's lethal backhand seared through the 1st Street Jetty lineup with a power that went unmatched in the Final to earn his first-ever Vans Pro QS victory -- and the first to claim a WSL Pro Junior and QS win at Virginia Beach.

"The stars just aligned in that Final after getting through some tough heats today and I just found my rhythm so I couldn't be more happy," Asing said. "Those three are ex-champions for a reason so I took them very serious. I have the utmost respect for them and you can never take your opponents lightly. This is my job day-to-day and I take this very seriously, and I'm here to win." Asing saved his best for last after earning runner-up in both the Quarterfinal and Semifinal bouts to go on and crush the Final. - WSL / John Ferguson

This win puts Asing back into the Top 10 on the QS rankings and plenty of momentum heading into Europe. The South Shore, Oahu, native made his intentions clear at the beginning of the year and now has two QS3,000 wins to back them up.

"I want to send a message to a lot of people that I'm ready," Asing continued. "I want to keep hitting these podiums and racking up wins, any time I enter a contest I want to win -- I don't stand down from anyone or contests." 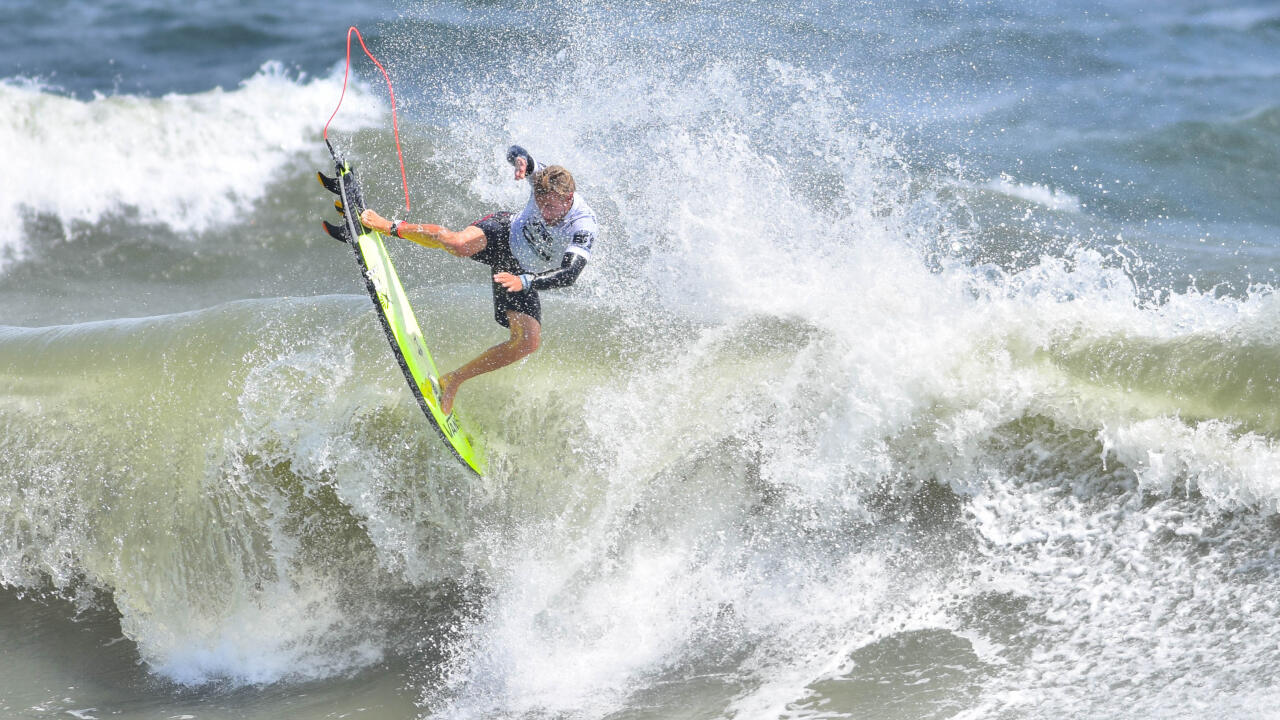 Patrick Gudauskas went all or nothing -- unfortunately not coming down with the landing to this massive air in the Final. - WSL / John Ferguson

This marks runner-up Gudauskas' third Vans Pro Final, earning a win in 2013 and third-place finish last year. The San Clemente, California, surfer looked to be on his way to a second Vans Pro victory with the contest's most stunning performance in Semifinal action -- earning a Perfect 10 and 18.90 heat total to mark the event's highest single-wave score and heat total. Gudauskas' immaculate air-rotation had the crowd in an uproar as he added two more carving turns to finish off the wave at the shoreline. Now, the 32-year-old prepares for the anticipated European leg in an effort to possibly make his way back to the Championship Tour by season's end.

"It's always a challenge here and I feel like this year the field was the best it's been all the years I've been here," he said. "Making it to the Finals was great and I really wanted to win that one, but I feel good with second and getting some good points. Anytime you have a heat like that Semifinal is incredible, to get a ten was great and to still feel hungry every heat. I can feel that momentum building and it's my goal to hit that peak in Portugal for the QS10,000 to set myself up for that last part of the year. I'm going to surf every heat like it's a Final, but know that the biggest Finals is where it will matter at the end so this a good start for those goals." Evan Geiselman made his second-straight Final at the Vans Pro alongside Gudauskas, but couldn't find the score he needed to keep up with Asing. - WSL / John Ferguson

Geiselman's third-place finish will send him a few spots up the rankings to start off some momentum of his own heading into Europe. The defending Vans Pro winner continues to show his prowess at his home East Coast with two Finals in the two events he's competed in, winning the Ron Jon Vans Pro at Cocoa Beach earlier this year.

"It was great to give myself a chance to win, that was my goal coming back here after I won Chiba last year and lost in the first round this year," Geiselman said. "This was good for my confidence to win some heats and make a Final. I feel like my surfing's there and this is still one of my funnest trips every year so to make some more memories is great, now I'm stoked on getting over to Spain and giving it a run there." Vans US Open of Surfing winner Kanoa Igarashi continued his form from Huntington to Virginia Beach and made his second Final at the 1st Street Jetty, but couldn't find a backup to his 7.00. The fourth-place finish solidified Igarashi at No. 3 on the QS rankings heading into his favorite part of the competitive season.

The next Qualifying Series event will be the Pull&Bear Pantin Classic Galicia Pro QS6,000 August 29 through September 3, as well as the WRV Outer Banks Pro QS1,000 presented by Pacifico.