Frederico Morais greets guests to Cascais -- his hometown and the site of this week's EDP Billabong Pro Cascais -- before they even get to town. First, at Lisbon airport, his deep-thoughts stare glows from a huge plastic lightbox on the way to baggage claim. Next, it welcomes you on the road, from a 20-foot-high billboard for Billabong Pro on the first roundabout into town. Morais, hovering over the roundabout at Carcavelos. - WSL / Anna Dimond

If you happen to miss his baby blues there, though, fear not. Ever the gracious host, Morais is posted up at yet another roundabout. This one is at Carcavelos, the main event site for the EDP Billabong Pro. Elsewhere in this beachside bastion of wealth, waves, and jaw-dropping sunsets, Morais' face appear on fliers, posters and anything else advertising the contest, a Qualifying Series 10,000-level event. Never mind that there were dozens of other surfers -- some of them longtime veterans of the elite Championship Tour -- who have also been competing in Cascais. In Portugal, there is only one man who matters.

Frederico Morais Powers Through In Portugal
6:21
The Championship Tour rookie is looking very tough to beat at home.

While Kikas, as he's known to fans, has been working his way up the QS for years, it wasn't until he made the elite CT in 2017 that his local status took a star turn. In a random, unscientific experiment that required Morais to talk about his fame while walking across the beach Tuesday at Guincho, neither Morais -- nor the hopeful interviewer -- could go more than a few steps before a fan would stop him for an autograph or photograph. What began as a short stroll became a firsthand, meta demonstration of his emerging fame. Fans popped up all over the beach Tuesday at Guincho. - WSL / Anna Dimond

Part of Morais' skyrocketing stardom likely also stems from two preconditions. First, Portugal has not had sent a hometown surfer to the Championship Tour for years; the last one was Tiago Pires, who qualified in 2007, and fell off tour seven years later. After struggling with a knee injury, he announced his official retirement in 2016, but is considered a godfather of pro surfing here, pacing the way for the next generation. Secondly, in recent years surfing itself has been getting the star treatment in Portugal, with myriad event promoters and tourism boards pushing it as part of the country's current tourism boom. If you didn't know that Portugal had waves before this year, it would be hard to miss now.

Morais vs. Medina
2:36
Kikas' star was rising long before this past July's J-Bay Open. But his performance there, in pumping conditions, catapulted him to a new level.

Of course, chiseled cheekbones, utter poise and a smile made of gold don't hurt when it comes to attracting acolytes. But what really turned Kikas Fever up was his success so far this year. There was his fifth-place finish at the Rip Curl Pro Bells Beach in April after which, he said, fame grew. But then came J-Bay, where he and Filipe Toledo put on one of the best shows in professional surfing of all time in the Final. Morais didn't win, but his searing performance on the way to runner-up was more than enough to secure fans for life, and boost his star-power in Portugal from emerging to Belieber status. Yet another autograph, on a three-minute walk across Praia do Guincho. - WSL / Anna Dimond

So how is Morais, a well-heeled but humble guy, dealing with this star turn? "I'm from here, and it's the first time I've seen my face everywhere," he said. "But it shows how proud the Portuguese people are, and how much they like to see someone be successful around the world and carrying the Portuguese flag. And that makes me really happy.

"It's hard to say that you would expect that [level of fame], but I expected that I got fifth place and second in my first year on Tour. But this is what I've been working for my whole life -- to qualify to be successful on Tour. So, I don't know. It's a good feeling." 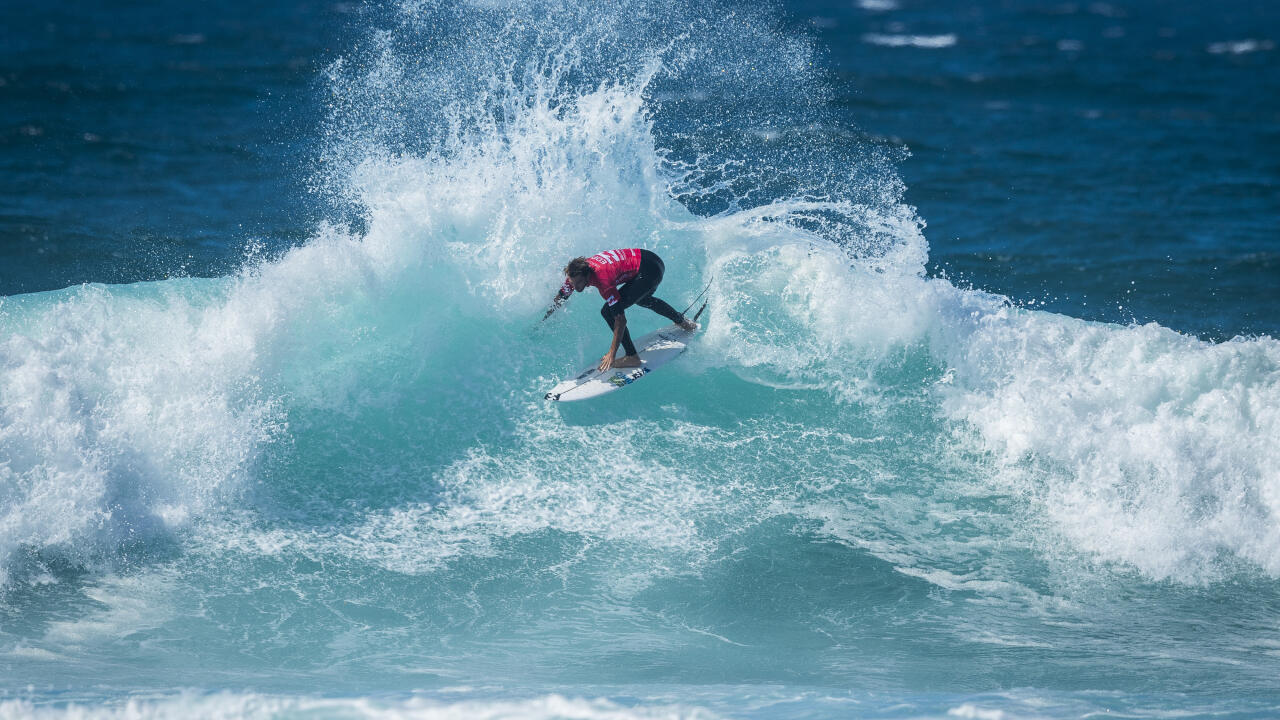 Still, all the humility on the Iberian peninsula can't obscure the fact that the guy is a household name, with a profound presence -- not just literally, but also culturally. In restaurants, surf schools and hotel lobbies, a casual mention of the EDP contest will invite the same question: How is Kikas doing? And the potential weight of that emerging fame isn't lost on him. Along with his longtime surf coach, Richard "Dog" Marsh, Morais turns to another expert for support in this process. "I have a psychologist," he said. "Sometimes if I'm feeling stressed or some kind of pressure, he can help find ways to fight that and to just go around it, or find a positive way to look at it. That's a great help."

Next up for the Portuguese prince is Round Five at the EDP Billabong Pro, where he will be pitted against fellow European rookie Leonardo Fioravanti. No matter how Morais does, however, it likely won't matter to fans (nor, it should be said, to his CT rank, at No. 11). Armed with markers, jerseys and selfie sticks, they are hanging on to this hero as long as they can.