With the Championship Tour Title race dramatically looming on the horizon like another orange-hued sunset over Kaena Point, destined to be determined at the 2017 Billabong Pipe Masters in just over a month's time, what is a pro-surfing fan to do in the meantime?

Well, if you're looking for some compelling viewing to get you through to December, look no further than the 2017 Men's Qualifying Series. November is the month when the QS hunt turns into a schizophrenic Hallmark movie drama, with all the emotional highs and lows of a Six Flags roller coaster.

Of the 10 available qualification spots, only a trio of slots look to be locked up heading into the final four major stops of the QS schedule -- the QS3000 Vans Presents the HIC Pro, the QS3000 Hang Loose São Sebastião Pro, the QS10,000 Hawaiian Pro and the QS10,000 Vans World Cup. Here's who's looking locked: QS No. 1 Jesse Mendes (who has already surpassed 2016 QS Champ Connor O'Leary's year year-end total), No. 2 Kanoa Igarashi, who looks like he'll double-qualify for the CT for the second year running (he's ranked No. 20 on the CT, two spots clear of the cutoff), and Brazilian teenage phenom, No. 3 Yago Dora. After that, the situation is more fluid.

Many of the top-rated Brazilian contingent have chosen to battle it out at the Hang Loose Pro, an event that Igarashi won last year when it was a QS6000 and ran at a different location. Currently listed in the field, which is set to begin November 2 in Maresias, Brazil, are World No. 2 Gabriel Medina, No. 7 Adriano de Souza, perpetual requalification-bubble-dweller Jadson Andre, Mendes, Dora, QS No. 4 Willian Cardoso, QS No. 5 Tomas Hermes and QS No. 8 Michael Rodrigues. Cardoso has the most to gain at the Hang Loose Pro, as he is currently looking to better only a 650 point result to improve his overall rankings situation. Mainland USA's other top 10-ranked QS surfer, No. 7 Griffin Colapinto, according to a Billabong team source, will forego the trip to Brazil. Instead, he's opting to travel straight to Hawaii early and concentrate his efforts on the North Shore and the HIC Pro (where he lost in Round Three today). Hawaiian No. 6 Keanu Asing, Aussie No. 9 Wade Carmichael and Frenchman No. 11 Jorgann Couzinet are all still alive at the HIC Pro.

Colapinto's Clutch Hail-Mary Air
2:54
The San Clemente standout throws his board beyond vertical to secure a huge last-minute score.

Once again the prospect of a dark horse emerging from way back of the lead pack seems unlikely. Yet, there is precedent, plenty of it. One must only go back to last season to revisit current Rookie of the Year candidate Frederico Morais' unlikely run to the CT. Prior to the Hawaiian Pro, the man from Cascais, Portugal, sat at No. 28 on the QS rankings, then jumped to No. 3 via back-to-back runner-up finishes at the QS10,000 Hawaiian Pro (which 2016 World Champ John John Florence won and the QS10,000 Vans World Cup (taken out by Jordy Smith). In 2014, Maui's Dusty Payne mounted an almost insurmountable climb onto the CT, making the leap from QS No. 98 to No. 10 by the end of the Triple Crown, after a win at Haleiwa and a 2nd at Sunset. His third-best result that year was a 5th place finish at the Volcom Pipe Pro. History has shown, however, that with a majority of CT surfers chasing the Triple Crown, there's no guarantee that there will be plenty of big points left to go around for QS surfers.

With the typical end-of-year qualification threshold situated at about the 19,000-point mark, according to WSL numbers guru Al Hunt, at this point only Mendes, Igarashi and Dora have earned more than that, and look like good bets to finish inside the top 10 no matter what happens in Hawaii. This year's race features similar circumstances to those in 2016, too, with five QS10,000s on the schedule and comparable points available overall. 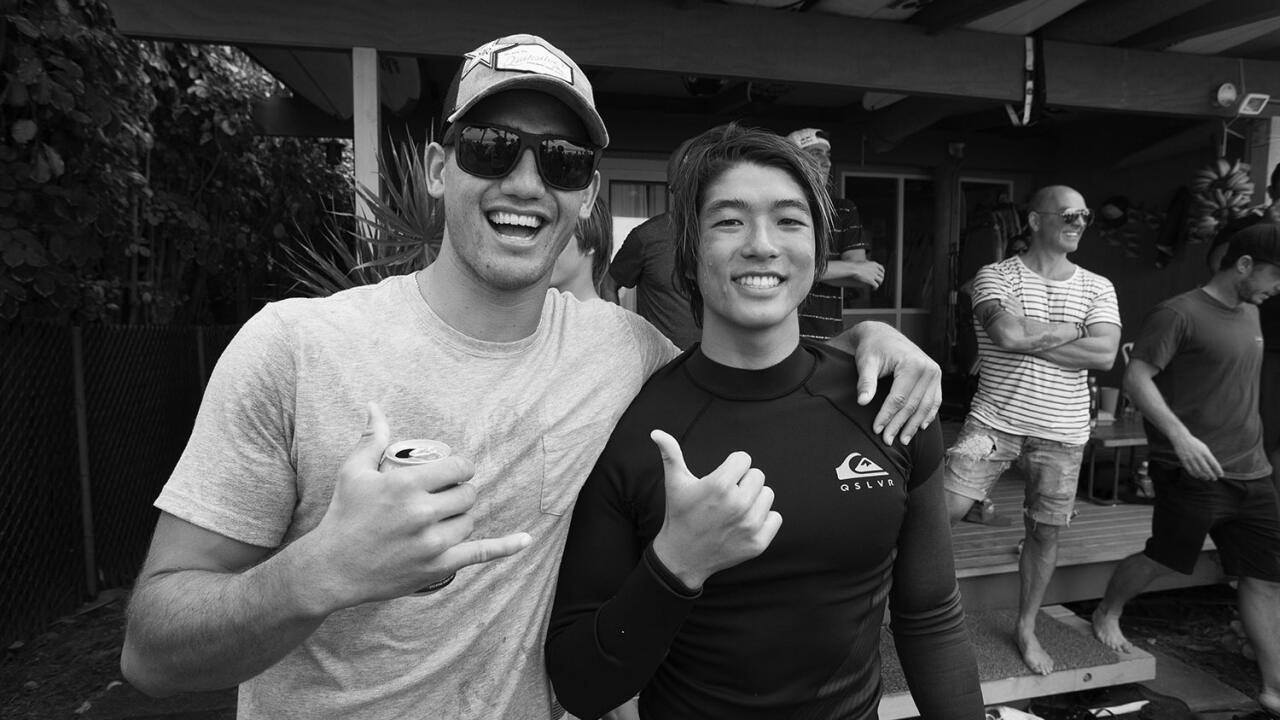 The last man standing in 2016 was Ezekiel Lau at No. 11 with 18,750 points, who was helped by Igarashi's improbable run to the Final at the Pipe Masters, which sealed the Californian's double qualification and opened the door for Zeke just before it was slammed shut for good.

Sunset Beach provided the perfect canvas of conditions for competitors