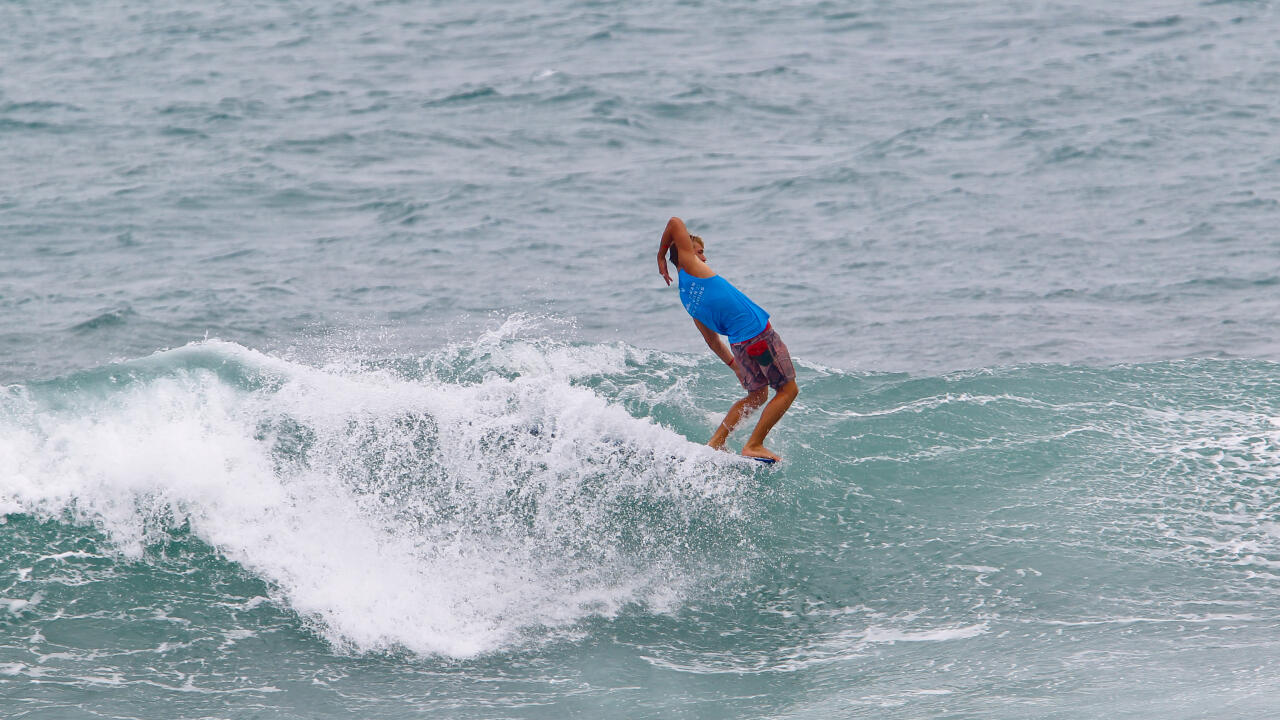 Kevin Skvarna riding a single fin with no leash was a standout on the opening day of competition. - WSL / Tim Hain

History has been made at Jinzun Harbour with the Taiwan Open World Longboard Championship kicking off in pumping surf. It was an exciting opening day as the best longboarders on the planet surfed through Men's and Women's Round One in clean, 3-to-4 foot waves.

After a win in the Kumul PNG Longboard Championship Tour event earlier in the year, Brazilian sensation Chloe Calmon comes into the Taiwan Open leading the rankings and a favourite to win the title. Calmon got her campaign off to an epic start posting an excellent heat total of 17.90 to for an incredible display of poise on the nose and speed and release in her turns. Calmon's total was the highest of the event so far and sees her move directly into Round Three. 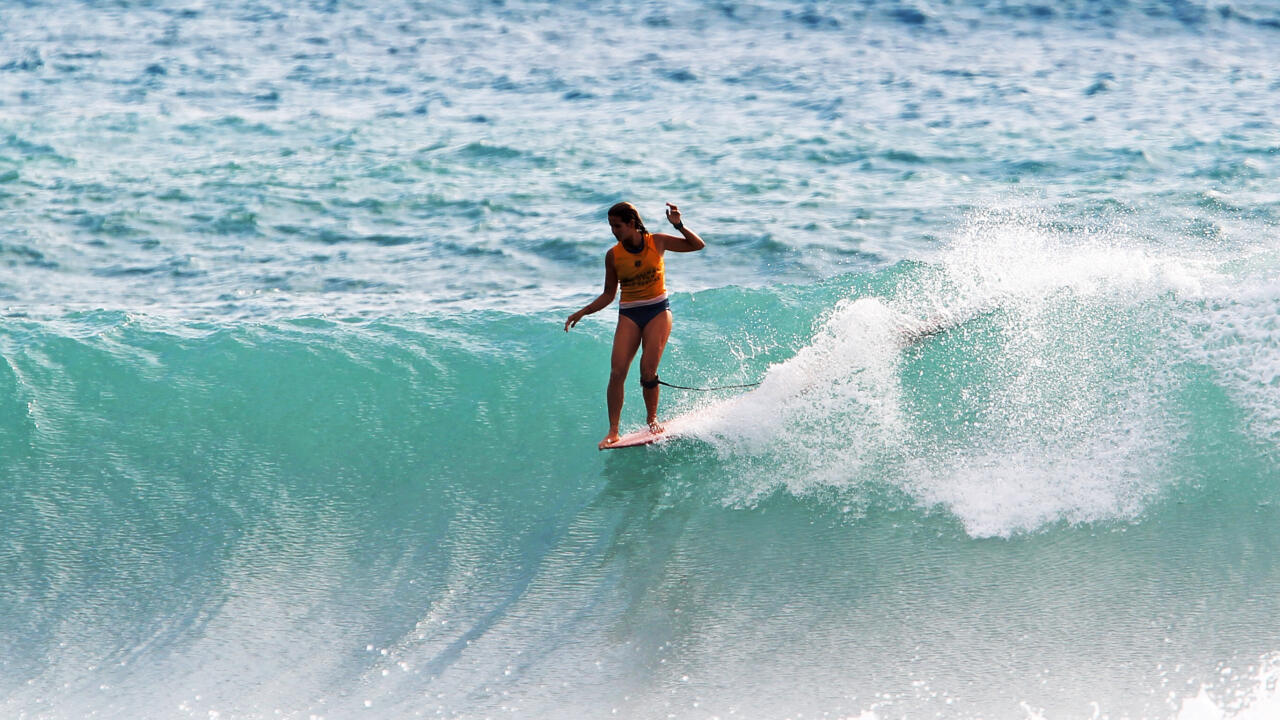 "This place is so amazing -- we have been getting great waves," Calmon said. "I was having a good time in my heat, posting a solid score early is always nice as you can relax a little. In PNG I ended up in Round Two, so to skip into Round Three here is really nice."

Surfing the opening heat of an entire event is one of the most daunting prospects for any competitor. It didn't seem to affect French surfer Alice Lemoigne, though, who got her heat off to a great start posting a 6.67 on her opening wave. Lemoigne reveled in the clean morning conditions combining her graceful noes rides with rail-to-rail surfing to win the heat with a two-wave total of 13.40 (out of a possible 20). "It's always hard to surf the first heat but the waves are pumping so it was really fun," Lemoigne said. "I had a really fun surf early this morning and knew how good the waves were so I was really excited to surf my heat. I have been preparing a lot for this event and am feeling really comfortable, it feels great to be competing."

In 2015, Californian Rachael Tilly burst onto the global stage when, at just 17, she became the youngest-ever World Longboard Champion. Tilly has arrived in Taiwan sitting in equal 5th place on the rankings in search for her second title. On day 1 she took a step in the right direction, progressing into Round Three after winning her heat with a total of 15.33. "This is not an easy wave to figure out -- it changes a lot from heat to heat which can be confusing," Tilly said. "I chose to sit on the right as it looked to be the wave offering the most opportunity. I was pretty nervous before that heat to I'm stoked to get through into Round Three and am excited to see how the event unfolds."

After a bicep injury in PNG forced him out in equal 9th, reigning world champion Phil Rajzman has a tough road ahead of him if he is to go back-to-back. The powerful Brazilian isn't focused on a Title and explained he had more to surf for now after the sudden passing of good friend and fellow WSL competitor Jean da Silva. Kaitlin Maguire on a bomb in Heat 1. - WSL / Tom Bennett

"This is my first time to Taiwan and I am really loving the place," Rajzman said. "It has amazing food, great waves and friendly people. It would be hard for me to win the Title this year but I'm not focused on that. Yesterday we learned that we lost our good friend Jean da Silva which was a terrible shock. I will be surfing for him and have him in my heart and mind now."

Current Men's ranking leader and two times World Champion Taylor Jensen was consistent as ever posting a 16.84 heat total with his trademark power. Jensen is favourite to take the title in Taiwan this week but is playing it cool and just focusing on one heat at a time. Taylor Jensen is taking it heat by heat in Taiwan. - WSL / Tim Hain

"Anything could happen here so I'm not looking too far ahead," Jensen said. "To win the Title here I have to win the event so I'm treating it as I would any other contest."

Having won the Taiwan Open as a Longboard Qualifying Series event in 2016, Edouard Delpero has a strong affinity with the waves at Jinzun Harbour. Delpero continued where he left off posting a near perfect 9.60 for an incredible hang ten through the most critical section of the wave. He then backed it up for a massive heat total of 17.97 to win his heat and cruise into Round Three. Edouard Delpero is former winner at Jinzun and was looking comfortable on Day 1 of competition. - WSL / Tim Hain

"It's awesome to be back in Taiwan -- I love this place," Delpero said. "This wave is great for longboarding so it's exciting to be here. The 9.60 felt really good, I knew it would be a big score but not that big. It just kept going and allowing me to ride the nose so it was a very good start to the event for me."

Adam Griffiths had the event of his career in PNG earlier this year finishing in equal 3rd place. The always-humble Englishmen admits it was a result that exceeded his expectations and had come to Taiwan with the goal of re-qualifying for the LCT in 2018, an easy feat considering his ranking at the moment and the fact he progressed into Round Three on the opening day. Griffith trailed Australian Nic Jones until the dying minutes when he grabbed a score and the heat win. "PNG was a real shock to me to be honest," Griffith said. "To finish 3rd in the world was not what I was expecting. Coming into Taiwan I have similarly little expectations and pressure on myself apart from wanting to be here again next year. I don't think I would ever become World Champion but stranger things have happened so we'll just have to see what unfolds."