Handicapping the Vans World Cup is an incredible crap shoot. The inherent vagaries of Sunset Beach make it nearly impossible to predict what will happen from heat to heat, let alone round to round. For decades the wave has been the ultimate proving ground for competitive surfing on the North Shore. You haven't really made it as a world-class pro until you've stamped your mark on Sunset. 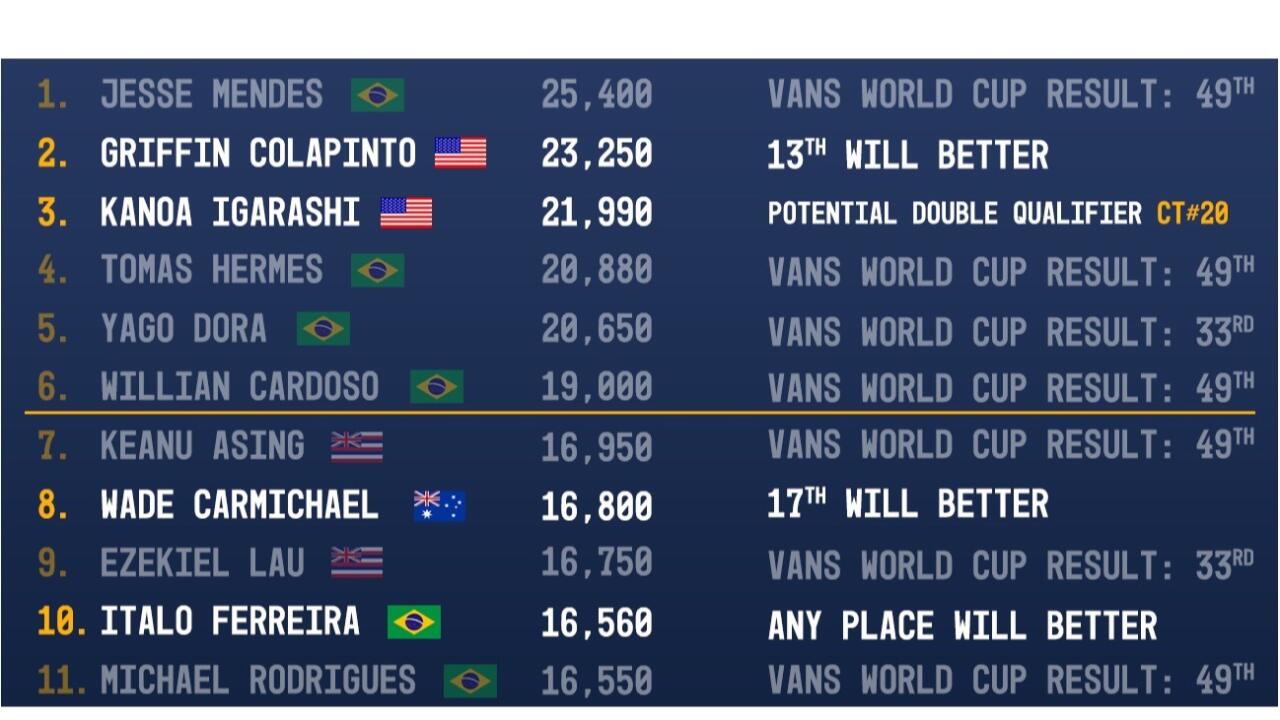 The current Qualifying Series rankings heading into the final day of competition at the Vans World Cup. Those above the yellow line entered the event already having qualified for the 2018 Championship Tour, everyone below is vying to stay in the Top 10. - WSL

Competitors heading into the final day the Vans World Cup with a shot at qualifying for the 2018 Championship Tour.

One thing you can count on, however, is that when the Championship Tour surfers wearing the red jerseys hit the draw in Round Three the performance level inevitably rises.

A fact reiterated by Italo Ferreira and Sebastian "Seabass" Zietz who, in consecutive heats, raised the performance bar to CT levels. Seabass surfed a nearly flawless heat, bettering the Brazilian's 17-point total with a 19.17 total heat score (including the highest single wave score of the entire event -- a 9.77).

Proving Ground: Pro Surfing's Rich History at Sunset
4:01
Sunset Beach has been the ultimate test since the very beginning of the pro surfing dream. While much as changed, the renowned Hawaiian wave will always matter...and that's a good thing.

"I actually just flew in from Kauai last night," said a grinning Zietz, who launched his pro career with a dark horse run to the Triple Crown title in 2012. "The Triple Crown pretty much gave me everything I have and it would be a shame if I didn't do it, so I'm going to do it as long as I can."

Post Show Report: It's Make or Break Time at Sunset
22:51
Pro surfing doesn't get any more high pressure than this.

Unfortunately, Zietz's triumph came on the heels of a disappointing morning for the Hawaiian contingency. By the completion of the third heat of the day, QS No. 7 Keanu Asing and No. 9 Ezekiel Lau had already failed to advance out of Round Three.

Their CT qualification hopes had been unceremoniously snatched from their grasp, as they no longer controlled their own destiny. Both surfers needed to make at least one more heat to feel comfortable with their collective positions on the New Era Qualifying Series rankings. Hawaii's Keanu Asing suffered a heartbreaking loss in Round Three, taking control of his 2018 season out of his hands for now. He's hoping to stay in the QS top 10. - WSL / Keoki Saguibo

"A lot of people are counting on us to keep Hawaii proud, but it's tough," admitted a dejected Asing after his loss. "Results don't dictate who I am, it doesn't define my whole year, I've had a great year, but I just have to come back stronger."

But as the day progressed, Sunset proved once again that it will have final say in these matters. Incredibly, all but one of the surfers best situated to take advantage of the happenings earlier in the morning faltered as well. That one surfer was QS No. 14 Michael February. "It's definitely a thought that's always in the back of my mind, you can't help but think about it," February said, alluding to his CT qualification hunt. "At the same time, at a wave like Sunset there's a whole lot of other things to think about, it's such a different wave and requires a lot of patience and a lot of attention and I'm just trying to fix all my attention on the wave."

On a positive note, the future of Hawaiian surfing looks bright. A deep pool of young talent appears ready to emerge, led by Maui's Imaikalani Devault, who's having a breakout performance at the Vans World Cup. Devault surfs with a fearless, frenetic energy, living on a razor's edge in every heat.

Highlight Reel: Top Seeds Take Charge
2:08
It was an action-packed day at Sunset Beach for the Vans World Cup, as top seeds made an impact in excellent conditions.

Looking reminiscent at times of a young Chris Ward, he's a surfer -- much like peers such as Ethan Ewing, Yago Dora and Griffin Colapinto -- who has that extra spark in their surfing, that bonus dose of natural ability that separates special talent from hardworking energy.

"We look at the older guys as inspiration, they're the best," he said, "but there's definitely a new school. All the young Hawaii guys, we still try to stick to the power game and add some flair."