There is one common thread that always seems to ring true in January on Oahu's North Shore: When it comes to waves, you never know what the North Pacific is going to dish up. Kai Lenny advanced out of his Round One heat. - WSL / Keoki Saguibo

As if to prove that point, opening day at the Volcom Pipe Pro, in a nutshell, was tubes early and turns late. Pristine conditions and an overhead, fading northwest swell turned Pipeline into a right-hand sandbar as the first heat hit the water. Later, a southwesterly wind kicked in mid-morning at Backdoor, then began to send bigger and bigger windblown lumps up the face, finally turning highly contestable conditions into marginal closeouts in a matter of just 90 minutes.

And on a day when veteran savvy often trumped youthful exuberance, when North Shore veterans like Sunny Garcia, Makua Rothman, Jason Shibata and Love Hodel all won their first heats, experience counted. Six-time Triple Crown of Surfing Champ, Garcia, looking for a bit more length and volume to help through a churning lineup, broke out his 7'2". He later joked, "Luckily I'm big enough to turn it." The most impressive moment of the day, however, was the performance of young South African and current Qualifying Series No. 1, Matthew McGillivray. McGillivray, who's coming off a win in Israel at the QS 3,000 Seat Pro Netanya pres by Reef, surfed with the confidence and composure of a surfer just coming off the biggest competitive victory of his pro career. His 15.82 total heat score was double that of many of the winning heat scores of the day.

"The wind is really helping, it's a devil wind so it's blowing into the wave face, and I knew it would be good to try to do an air or two," he said. "Thankfully I pulled one off on both my scores and the judges gave me a big score so I was really stoked on that. It feels good to win the first heat, definitely just gives you a bit of momentum going into the rest of the contest and I'm looking forward to the swell picking up. I'm hoping to get some barrels during the next heat." 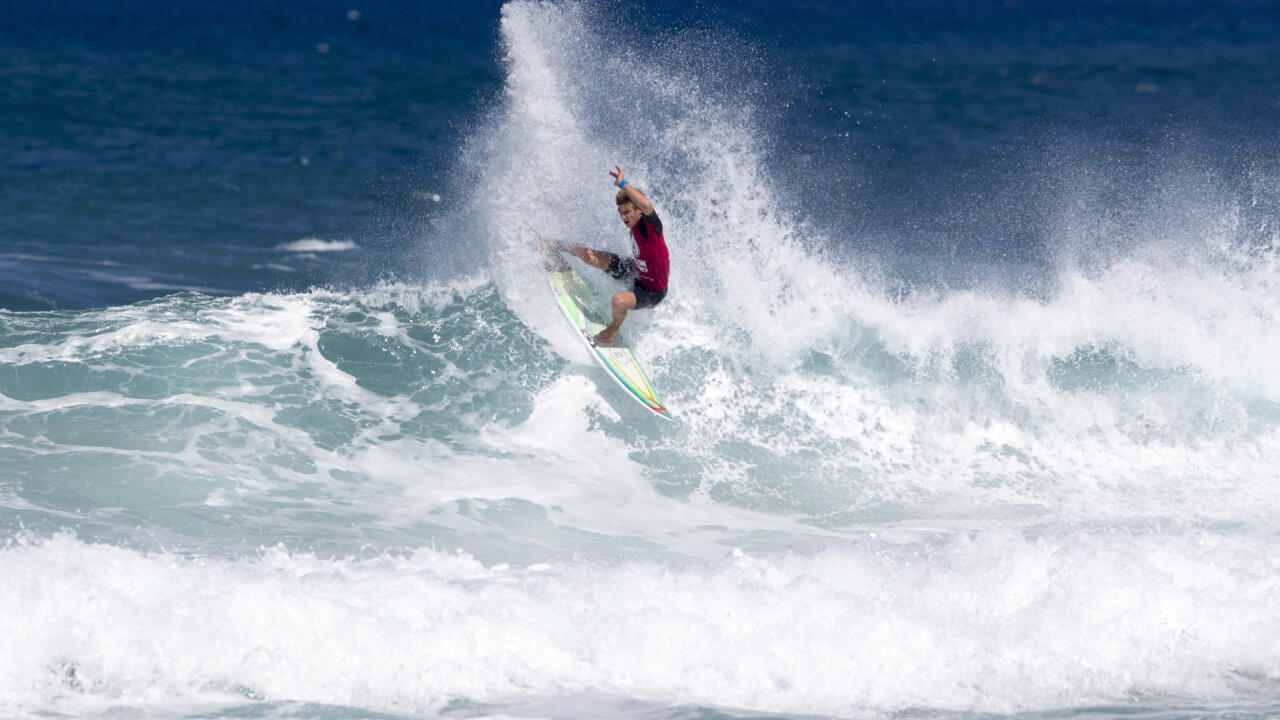 Earlier in the morning, in Round One, Heat 2, as the sun began to peek out from behind Comsat Hill, Rothman and Noa Mizuno locked into a clash featuring the best backside tube of the entire round -- an 8.00 from the goofyfooter.

"I think today is one of those days where you have to really move around," said Mizuno, "I paddled deep to the rip bowl, that's how I found that wave. That one just cornered perfectly, and I don't really go Backdoor very often, but I could tell that was a good wave so I just went. I had one really big pump and then I got enough speed to where I could get really comfortable in it and I just came out, it was a really good exit. Perfect goofyfoot wave for Backdoor." Noa Mizuno nabbed one of the best barrels of the day. - WSL / Keoki Saguibo

With the southwest devil wind showing no signs of backing down, organizers were forced to call it quits after Heat 2 of Round Two. But with the prospect of much bigger surf and lighter winds on the horizon (read: Wednesday or Thursday), the decision to wrap things up earlier than planned was a smart one.