Griffin Colapinto's incredible rise has been swift. Two years ago he was merely one of many up-and-comers swimming in the deep end of surfing talent down in San Clemente, California. Today, heading into the 2018 WSL Championship Tour (CT) season, he's the youngest of seven rookies on the men's side, and his arrival is among those to watch when the Quiksilver Pro Gold Coast kicks off March 11.

"Griffin's the sickest human of all time," says fellow pro Pat Gudauskas. "He rips so freaking hard. He's going to crush it on Tour. ...He's gnarly." Peers have been admiring him for years, but Griffin's first big public shot across the bow came in November 2016, when he landed a Hail Mary aerial-reverse at the Hawaiian Pro at Haleiwa, the first of the prestigious Vans Triple Crown of Surfing contests. The high-stakes QS 10,000-level event provided his first real dose of global limelight, but he's been making routine appearances ever since.

Last year alone, he finished runner-up to Ethan Ewing at the World Junior Championships, made the Final of the 2017 Volcom Pipe Pro, and began a steady climb up the Qualifying Series ranks. This past December, he became the first Californian to win the prestigious Vans Triple Crown of Surfing after making back-to-back Finals appearances at Haleiwa and Sunset Beach. In addition, he finished the 2017 at the top of the Qualifying Series rankings. 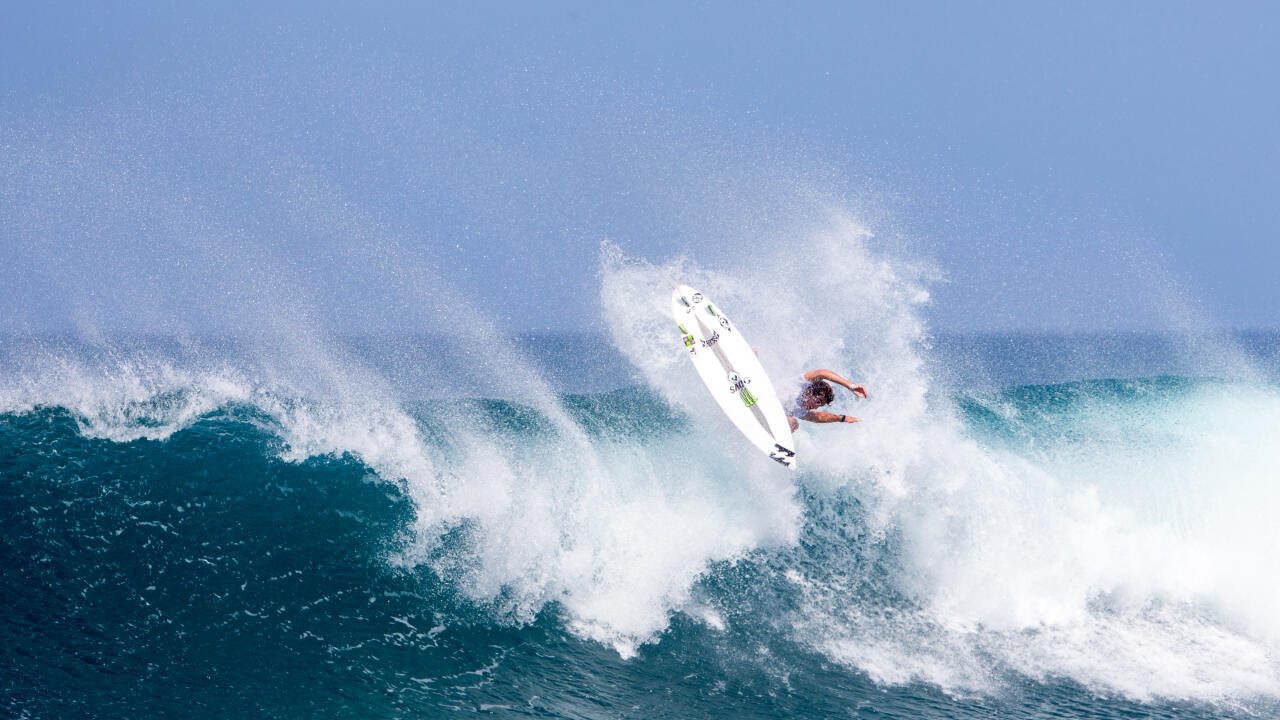 Colapinto's success is hardly incidental. It's all part of detailed plan he wrote down on paper years ago, thanks to his mom, Camille's, urging.

"It's funny because my wife, who's not a surfer at all but was a dancer when she was younger, is really into body mechanics," says Mitch Colapinto, Griffin's father. "I've surfed all my life but I couldn't tell you anything about where your foot needs to go or how your arm should be where she would watch the video with him and say, ‘Oh, you know, it looks like your knee needs to come in or you're moving your upper body too much.'

"I'm the cheerleader," Mitch Colapinto continued. "If he asked me how he's doing I'm going to say, ‘Wow, you're doing great, amazing job,' and again, she'll be the critical one."

While Griffin's hit his targets, he has had to abandon things along the way. When he was struggling on the Qualifying Series in 2016, he hit up former tour star Jake Paterson for guidance. Paterson was having great success with Leo Fioravanti and Kanoa Igarashi at the time, and Griffin loved hanging out with them.

"I basically told Jake I'd do anything he told me to if he took me on," said Colapinto. "He said okay, but that I had to start over, from scratch, and do everything he said. That's exactly what I did, and in the first event in Brazil I got 3rd. The next one was the one at Haleiwa, with the air. I made the Quarterfinals there. It just clicked." "We call him the sponge," says Paterson. "He absorbs everything. He's such a humble little kid, you know. There's no ego involved or anything. He's been brought up very well and he takes nothing for granted."

Colapinto's solid Hawaiian performances are a direct result of this bond with the Moniz family, the iconic surfing clan from Oahu. Griffin has been under their watchful eyes for years during his extended Hawaiian stays at the Billabong house. Colapinto became like an adopted son to Moniz parents Tony and Tammy, with two of their sons, Seth and Josh, becoming like brothers.

"They've taken me under their wing," says Griffin. "Seth would push me a lot to get a bigger [wave]. He's always charging a little harder than me, so I keep wanting to step it up because of him."

As a result, Colapinto is dangerous in every kind of condition, which is why he's arguably the most feared of the rookie class. "Oh, I don't think there's a weakness in his surfing," says Paterson. "He should make the top 22 next year and then I expect him to go straight to the top 10, top 5. Boom, fighting for World Title in the next four or five years." But Mitch Colapinto knows there will be more bumps ahead. "I teach third grade right now and one of my posters that I've had on the wall for 25 years it says, ‘This is a mistake making place.' You could get knocked off, you could get back on but you've got to enjoy the ride. You've got to enjoy every minute of it. So, it should be a crazy roller coaster ride. I'm not worried for Griffin. Expectations, goals, hard times, good times, I really feel like he loves it."

Catch Colapinto and the rest of the 2018 rookie class in the Quiksilver Pro Gold Coast live daily on the WSL from March 11 -22.