Yago Dora's On His Way
1:45
He's the youngest of Brazil's five-man rookie squadron joining the Championship Tour in 2018, and he's ready to rattle a few cages.

Despite his pedigree, Yago Dora was a latecomer to the whole surfing thing. As his peers began riding waves in pre-school, and were dominating lineups by second grade, Dora couldn't be bothered.

"He was never really interested," says his father, Leandro Dora, a former pro who coaches high-profile surfers. "He really liked soccer, and we encouraged that. He had a mini-soccer field at home. He played indoor soccer. He was fascinated and doing really well."

But Yago's dad wasn't about to force the surfing issue. "I see all these parents putting lots of pressure on their kids, saying, 'I want him to be a pro, he needs to get results.' I just don't think that's cool. He'd go in the water a little bit when we were at the beach but he never really went deep." Yago and his father, Leandro Dora, will be familiar faces on the 2018 Tour. - WSL / Damien Poullenot

"I liked to watch it, but I just wasn't into it," says Yago. "I used to get really cold, because the water temps in Florianópolis, where I grew up, are cold. But I'd go to the pro contest with my dad when they were in town and watch. I loved watching Andy [Irons] and Kelly [Slater]. I used to watch a lot of the videos, too, and Dane [Reynolds] was my favorite. But I didn't really start surfing until I was 11."

By then, Leandro Dora was coaching a handful of Brazil's up-and-comers, like Lucas Silveira, the late Ricardo dos Santos, Marco Giorgi and Adriano de Souza, who won the World Title in 2015. Sure, Dora was thrilled to see his son finally getting hooked, but he was in no hurry to push him toward competing. "I focus my work on the technical part of surfing," says the elder Dora. "I like to film a lot and study the footage. I look for the little technical details that they can improve on. Yago was really responsive to that. Once he took to it he'd surf for hours and come right in and review the footage."

"I never tried to copy anyone else's style," says Yago. "I watched what other guys were doing, but I wasn't being told to surf a certain way. I was developing my own style." If he wasn't surfing he was skating, refining his rapidly expanding range of tricks. Yago's aggressive aerial game evolved, especially after his dad started taking him along on trips to Peru and Hawaii, and filmed every wave. 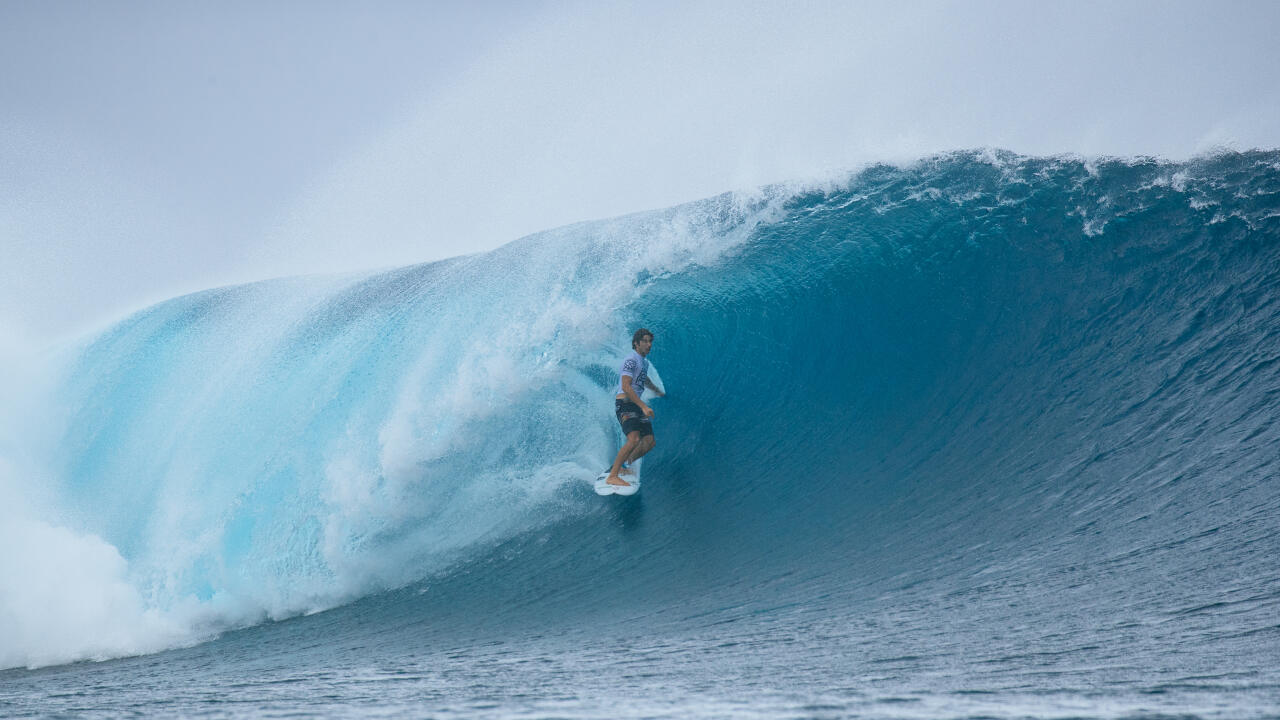 While Dora is best known for his aerial game his coolness under pressure is another hallmark of his surfing. - WSL / Ed Sloane

"I started putting these little clips out and people were liking it," says Leandro. "He was making these incredible airs look very simple, with really beautiful style, so the videos started to get shared on a lot of the big websites, which is really rare for a surfer from Brazil. I think he's really the first Brazilian surfer to really be known for his videos instead of his results."

Volcom was eating it up, too. They put Yago on their international team and sent him on more trips to feature him in their videos. "After a while people were going, 'Is he going to compete? Or just free surf?,'" says Leandro, who really didn't mind either way, so long as his son was happy. Dora doesn't need a lot of room to get moving. - WSL / WSL/POULLENOT

The decision to try competition was all Yago's.

"I wasn't getting results at first, I kept losing and losing, so that was tough," says Yago. "Especially when I was getting a lot of attention for doing trips. But finally things started to click a bit, and that really motivated me." And with his father coaching De Souza at the time, Yago didn't have to look far.

The next big turning point came in 2015, after the tragic death of Ricardo dos Santos. "Ricardo was the oldest one on our Aprimore Surf team," says Leandro. "He was the captain, the one who helped me educate the boys. That was such an emotional time, and that's when Adriano stepped into that role with all of his determination. He had a huge influence on Yago, teaching him how to focus and just behave in the competition world."

It was in 2015, when De Souza went on to capture his dream of winning a World Title, that Yago decided he was all-in for 2016. He was ranked No. 168 on the Qualifying Series (QS) at the time -- 158 spots below the approximate cutoff line.

"There was one little QS event in Brazil where I felt things click," Yago says. "I had a magic board, and I was bringing my free-surfing to the heat. I get along with John John's [Florence] story because he's always been a free-surfer also and he wasn't really doing well in competition until he realized he can free-surf inside his heats." After finding his groove, Dora jumped to No. 43 on the QS in 2016. In 2017, things began to snowball early, when he won the first QS 6,000 event of the year in Australia.

In May of that year, when the Championship Tour made its stop in Brazil, Yago earned a wildcard spot, and took full advantage of his first huge opportunity on the global stage. "I had nothing to lose," he says. "That was my chance to just show my surfing to the world." And show it he did. Dora eliminated Florence, Gabriel Medina and Mick Fanning on his way to a third-place finish, with his fan-base mushrooming along the way.

"I wasn't event thinking about scores," says Yago. "I was just trying to surf each wave as good as I could. That not only gave me confidence, it showed me that this is where I want to be. I knew I wanted to be on Tour full time." After another big QS win in the Azores last August, his dream came true. Naturally, his dad is just as thrilled. "What we look for in our lives is to see our kids happy," he says. "I think what's really nice is when you surf really well and all the crowd loves it and gets emotional...That's very magical."