A lot of weight is now off the shoulders of Barbadian Josh Burke (L) after his maiden QS victory. - WSL / John Ferguson

The third consecutive QS 1,000 added another new name to the trophy as Josh Burke finally emerged victorious at the QS level. A long-awaited Finals appearance was accomplished by the Barbadian and finished the job. It was a special day for the 21-year-old, who found his rhythm early on against 2017 Ron Jon Quiksilver Junior Pro winner Ryland Rubens in the Semifinals. Third time is the charm for Burke, who finally clinched a Finals apperance after two Semifinal losses in Florida. - WSL / John Ferguson

But, Burke saved his best for last and earned an 8.33 (out of a possible 10) to begin the Final against an in-form Colt Ward and didn't stop pressing until the final horn sounded.

"I'm just so psyched to make the Finals and actually win, I don't know this feeling because I've never had it before," Burke said. "I've won a Pro Junior in the past, but this has been a goal of mine for a long time now to take out a QS. This definitely gives me some confidence and just hoping to keep this momentum going. I've got a third and first now so I just want to get keep getting these kind of results.

"I'm just so excited to be standing here right now with a win and I'd like to dedicate this win to Zander [Venezia]," Burke continued. "I saw a Z in the clouds and knew he was there." "I'll get home for a few days before going to Martinique for the QS 3,000 there and then back home for another 3,000," Burke added. "These QS 1,000s are pretty hard with some of the surfers that come to do them like Evan [Geiselman] being here, who almost made the World Tour a couple of years. But, the 3,000s are another big step with a lot of great surfers so I'll just focus on doing my best there." Eithan Osborne's first-ever WSL chair-up is a dream start to the goals he has set for 2018. - WSL / John Ferguson

An explosive Ron Jon Quiksilver Junior Pro Final witnessed event standouts go all out for 25 minutes -- and a battle for first raged between Osborne and eventual runner-up Tyler Gunter. The two traded off near-perfect scores and excellent scores to back them up, but Osborne's 9.77 bested Gunter's 9.10. Taro Watanabe was able to break out of the combination situation, meaning he needed two new scores to equal Osborne's, in the final minutes but it was too late as he moved above Bo Raynor for a third-place finish.

This incredible win marks Osborne's first-ever WSL victory and puts his name at the top of North America Junior Tour rankings to start 2018 with even bigger goals in mind. "That just feels so good, finally won one, and coming into my last year as a junior I had to win one so it's a great start," Osborne said. "It just made my goal of the World Junior Championship that much more achievable and now I'm ready. That Final was just insane, we got so lucky with waves for it and Tyler [Gunter] got an eight, then I got an eight -- then Tyler got a nine and I got a higher nine, it was crazy. To have a Final like that with one of my best friends is great." "It's nowhere near over yet so I just need to keep my head down and power through the rest of these with similiar results," Osborne. "I've made two Finals in Los Cabos so I'm already looking forward to that event as our next junior stop, but I'll get some QS events done before then. This win definitely helps get my confidence going for the string of events coming up so I couldn't be more excited." 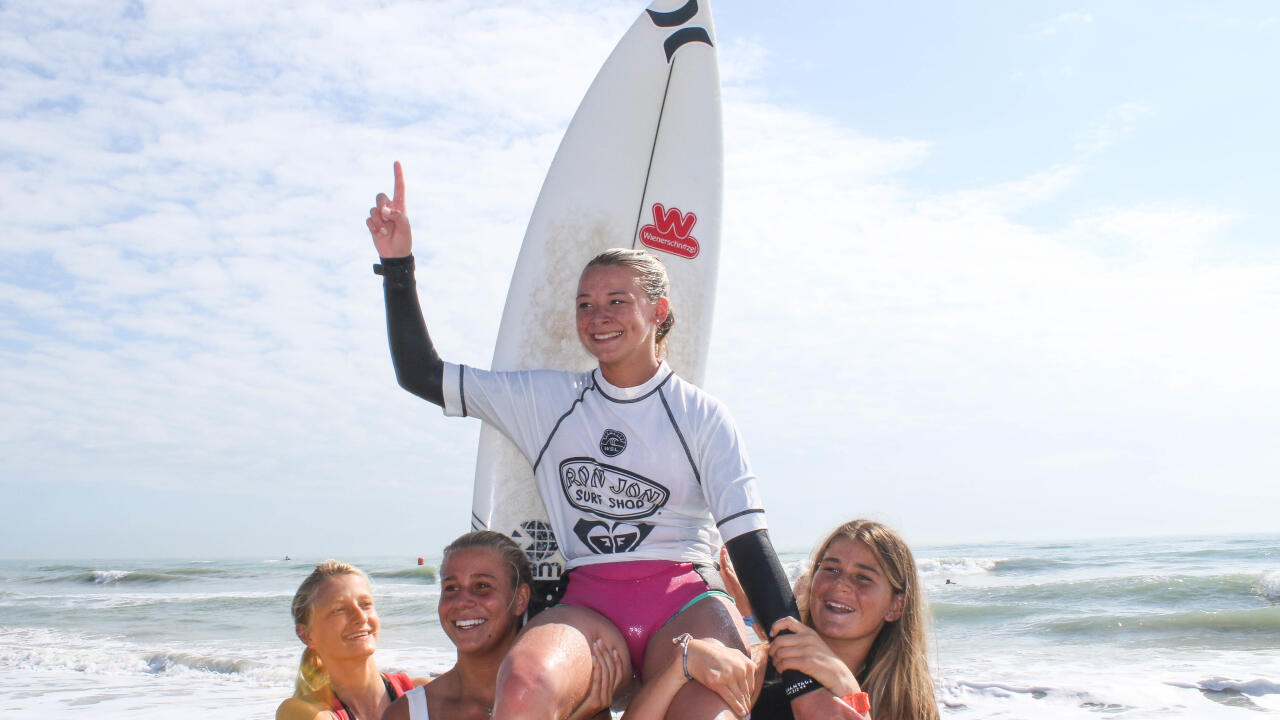 Kirra Pinkerton ended 2017 with a win and now starts 2018 with a massive victory. - WSL / Andrew Nichols

Conditions turned on at the start of the Ron Jon Roxy Junior Pro and Spencer's reign over Cocoa Beach was ended by an unstoppable Pinkerton. The 15-year-old now has back-to-back North America Junior Tour wins after winning the Live Like Zander Pro Junior In Memory of Zander Venezia to finish 2017. A quick start from Spencer left the field scratching to fight back and Pinkerton did just that -- earning a 7.17 on her first wave and backing that up with an impressive 8.57. Eva Woodland, third-place, and Tiare Thompson, fourth-place, are off to their best starts on the Junior Tour after a great showing.

Pinkerton's win puts her at No. 1 on the rankings for the first time as the Californian duo start 2018 in terrific fashion. 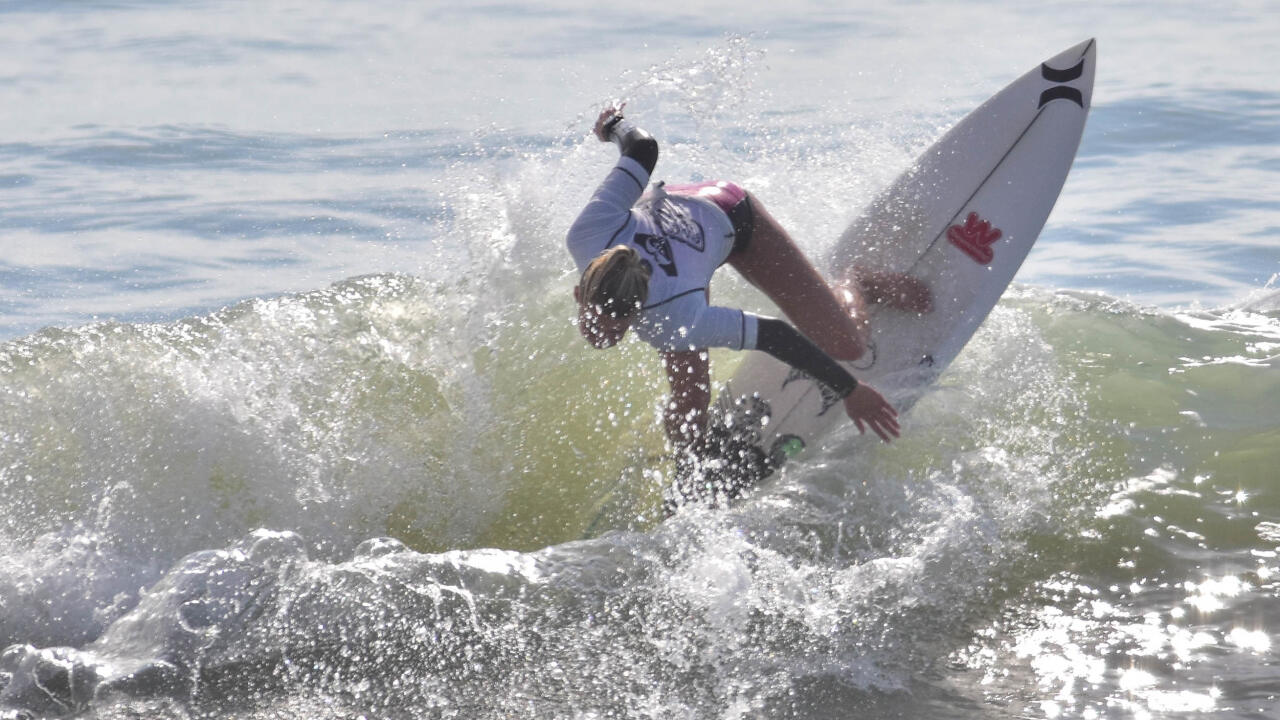 Pinkerton's determination to finish her waves showed her committment to winning this event. - WSL / John Ferguson

"It's kind of unbelievable to get that win because I didn't expect it at all and I'm just so happy to start the year off right," Pinkerton said. "The waves are tough here, but if you can get into the good ones you can really get some turns in. [Coming from Australia just before this one] the waves were literally flat over there so I was able to get some training on the board I was riding today. Alyssa [Spencer] got that 8.50 to start and I thought, 'No!' All I was thinking was that I needed to find the wave."

"But, my head calmed a little bit after getting that 7.17 and then got a little rattled when she backed it up so I went over to a different spot," Pinkerton said. "I didn't really see any waves coming there, but it felt right and I got that double-up to really do some turns. My original goal was to make it to Worlds, but now that I've won this one, my goal is to win all the events this year."