Port Alfred - Solid right-handers poured through for the final day of the Royal St Andrews Hotel Port Alfred Classic and it was the goofy-footers who displayed the best surfing all day in the chunky conditions.

The right-foot forward duo of Josefina Ane from Argentina and South African Zoë Steyn paddled out for their Women's QS 1,000 Final, and the waves continued unabated. While the big swell that was forecast for the day had still not materialized, the waves were highly contestable and the girls went to town.

It was the international surfer Ane who showed her experience by banking an awesome display of surfing for a 6.25 and a 7.5 to put her in an unassailable lead total of 13.75. While young Steyn put on a valiant catch-up effort towards the end of the Final she was unable to better the Argentinean's total, and bowed out in second place. Josafina Ane has started the year with a bang, and has a couple of excellent results in the bag already. Her win at the Women's QS 1,000 Royal St Andrew Hotel Port Alfred Classic pres. by Quiksilver is going to help her to achieve her goals. - WSL / Thurtell

By the time the Men's Longboarding final hit the water, the predicted swell had started filling in, and the next two goofy-footers in Matthew Moir and Steven Sawyer spent some of their time dodging bigger sets and picking up the lined-up mid-size waves. Both of them were charging hard, but it was Moir who picked up the better waves, and banked some massive close-out turns on the inside, as well as a number of classic longboarding moves to sneak the win from Sawyer. After a long layoff due to injury, Sawyer was still incredibly stoked to be surfing a WSL Longboarding event in South Africa. Longboard champ Matthew Moir is no stranger to the winner's podium, but he is always a powerful surfer and a stoked presence at every event he attends. - WSL

In the Men's QS 1,000 Final, it was yet again a goofy-footed pair in the final, the third such backhand final in a row, with Jordy Maree facing off against the Australian powerhouse goofy-footer Jordan Lawler.

Both surfers were on fire during their Semifinal heats, with Maree surfing a fast and exciting heat against Dylan Lightfoot, showing no pressure as he unleashed his lethal backhand against his determined natural-footed opponent. At the end of the heat Maree proved the heel is mightier than the toe as his backhand power hooks outshone Lightfoot's fast forehand carves.

"I was just really glad the waves came to me during that heat," said Maree afterwards.

The second Semifinal was even more electrifying with the fresh-faced Australian Lawler coming up against experienced competitor and Championship Tour strategy-savvy Greg Emslie. Lawler started off with a great 8-point ride, but then he picked up a bomb running along the sandbank and unleashed.

Lawler found rhythm and put together a series of radical backhand moves, carves and big hits, and finished off with a massive beyond vertical backhand crack to score the first 10-point ride of the event and leave the veteran in a combination situation at the end of the heat.

The Final was an intense affair, with Maree putting on some incredible backhand surfing against the focused Lawler. A few bigger sets rumbled through the line-up during the final as the two surfers went toe-to-toe amongst the lined-up inside sections.

Maree showed determination and perseverance as he put together a great show for the screaming local fans, being awarded a solid 7.25 for his best wave, and a back-up wave of 6.45 to give him a decent total and a hard reach for the Australian.

Lawler put together an incredible series of radical backhand moves including a long re-entry to air-drop floater, but his 6.9 score wasn't enough to get him the lead, and the very stoked and proud South African took his first QS win. 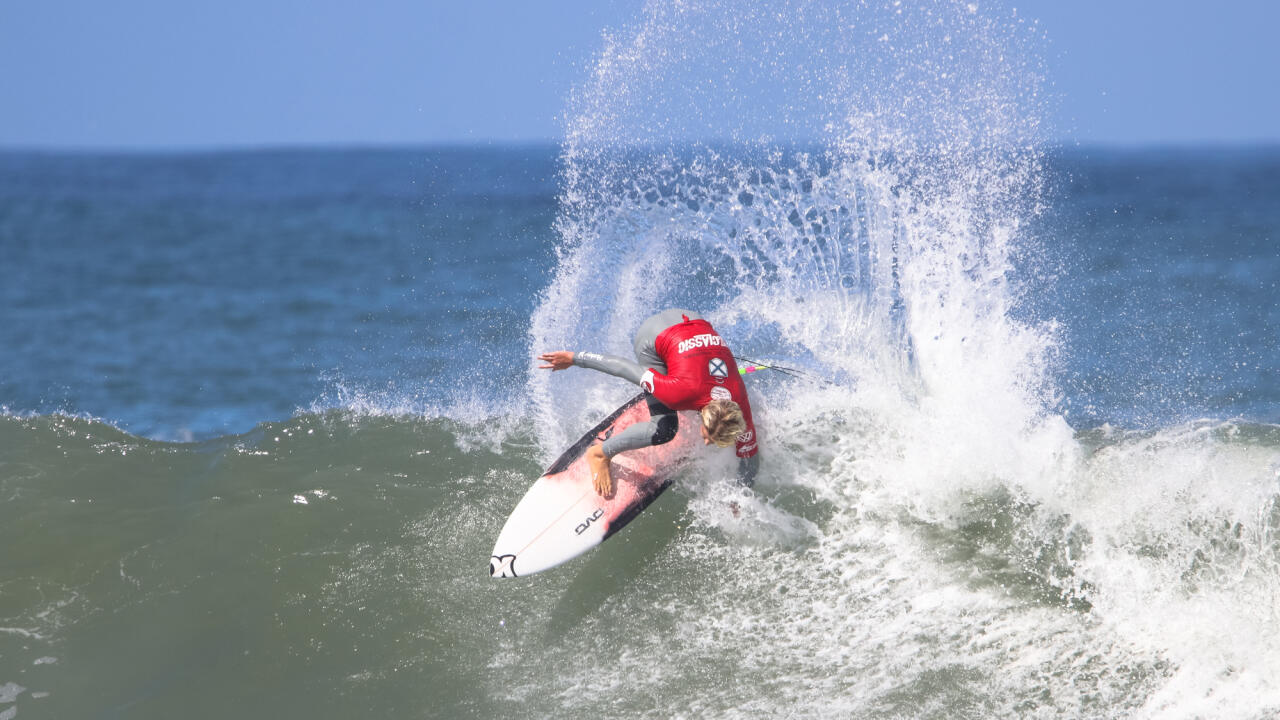 "It doesn't feel real to me yet," said a somewhat disbelieving Maree after the prize-giving. "There were so many heats, there were interference calls, being in combination with Dylan Lightfoot and needing two scores with ten minutes to go, and in the final it was quite emotional at times, taking off on waves and thinking that I could actually win this. I'm just super-stoked and thankful to every one around me."

Maree is the kind of surfer that could follow in Michael February path, and use the African domestic tour as a step-up into the big league.

"My goals for the year are just to surf the best I can and get the best results possible," said Maree. "I'm going to do this by working on my physical strength, and with some smart surfing." All the winners from the final day of the Royal St Andrew Hotel Port Alfred Classic pres. by Quiksilver. - WSL / Thurtell

Next up is the Mitchum Buffalo City Surf Pro pres by Reef Wetsuits that takes place from 12-15 April at Nahoon Reef in East London.