An island nation located about 500 miles west of Fiji, Vanuatu is the stuff of tropical dreams. For 14-year-old Kaltaliu Kalotiti, a small stretch of pristine coastline on Efate, one of the 83 islands that make up the country, is everyday life. Although it's heavily rooted in surf culture, because the island is so remote many of the locals struggle to find decent equipment -- surfing on homemade boards that have been passed down for generations.

But last week, Kalotiti got an upgrade to his gear. He gained widespread attention within the surf community when he made it to the Semifinals of a local surf comp on a board held together with duct tape. After a photo of his board was uploaded to Facebook by Stephanie Mahuk, President of the Vanuatu Surfing Association (VSA), an online campaign took root. Practically within minutes, Kalotiti was being gifted a new board from New Zealand Surf Magazine.

Mahuk discussed the recent Facebook campaign success and what it means for the people of Vanuatu:

The World Surf League: What is the Vanuatu surf culture like?
Stephanie Mahuk: The history of surfing in Vanuatu could arguably be dated back to when people first arrived on this archipelago of islands about 3,300 years ago. For the Melanesian people, the ocean and all that it provides has been a part of the culture for thousands of years.

Surfing on modern surfboards is relatively new in light of the historical traditional crafts comprising carved pieces of broken canoe that were used by our ancestors. The modern surfing scene is vibrant and consists largely of children using broken surfboards, canoe parts or drift wood to skim board on the shore. Thanks to the efforts of the Vanuatu Surfing Association (VSA), coastal surfing village communities have access to second surfboards that the children pass around amongst themselves as they take turns in the lineup. There is lots of party-waving, dropping in and cheering. It's all about the camaraderie.

What kind of competition was Kaltaliu Kalotiti surfing in when the online campaign took place?
He was surfing in the Vanuatu Surfing Association Leimalo Surf Festival. It is an annual international surfing competition hosted at Pango Village. In addition to five days of competition in various categories for prize money, it incorporates adaptive surfing in partnership with the Vanuatu Society for People with Disabilities, traditional craft exhibition and coral growing workshop. This year there were teams from Japan, Fiji, Samoa, Australia and New Caledonia. 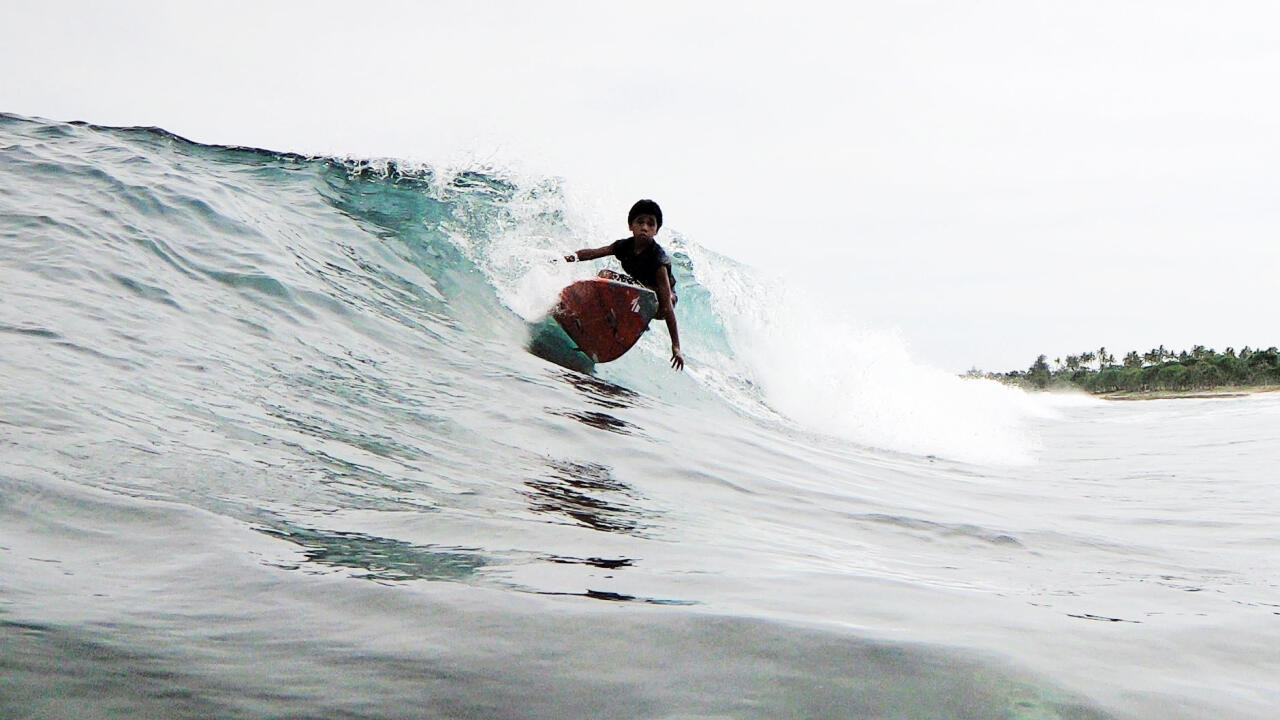 How long has he been surfing? And how did he get started?
Kaltaliu grew up in Pango village where playing in the waves is as natural as learning to walk. He would have been using driftwood, and only three years ago maybe, caught a break with the older boys who lent him a surfboard to use.

Does he receive any type of coaching or guidance? Or does he mainly surf with friends?
Surfing is in his backyard so everything he's learned about the sport has come from surfing every day, observing the older surfers and getting tips from them in the water. We have only one qualified ISA level 2 coach in the country who received his qualifications recently. Everyone else who has that technical knowledge are experienced surfers who spent time in Australia or New Zealand and traveled in their youth for comps.

From where did he receive the duct-taped board?
The duct-taped board is a Vanuatu Surfing Association donation board that is circulated in the community. His cousin, Pokino, was the last person to have some claim to it before he passed it to Kaltaliu.

Is finding the right surf equipment difficult there?
Surfboards, leg ropes, fins, fin keys, rashies, wetsuits and anything surfing related is very hard to come by in Vanuatu. The Vanuatu Surfing Association relies heavily on donated items to distribute to rural surfing villages on remote islands and teach surf-related skills, from coaching to board repair, and competition organization. The Association is comprised of volunteers and the various programs are made possible only through local corporate housing sponsorships.

When you uploaded the picture, did you realize what a big impact it would make?
I was shocked and overwhelmed at the outpouring of generosity. In my mind I expected someone locally to message to say, 'Hey, got a board here that's fairly dinged and damaged but fix it, put in new fins and it's his.' Instead we got some 326 shares and an influx of messages from all over Australia and New Zealand willing to help Kaltaliu and kids like him get access to boards and other surf equipment.

What does Kalotiti think about all this?
As a village kid, he's quite sheltered and oblivious to the Facebook frenzy around him. He's become the face of the Vanuatu Surfing Association's board drive efforts to get boards and surfing equipment to Vanuatu. However, all he sees is that he has a surfboard with fins and a leg rope that are quite possibly the most immaculate gear he's ever seen.

Is he impressed with his new board?
Ecstatic would be an understatement. Although it's a second-hand board, it's about as new as he's ever seen. Before the competition he was surfing a 5'10", way too big for him. So Pokino, who's in the same age group but taller in stature, swapped his board with Kaltaliu and gave him the orange 4'11". That 4'11" received quite a beating from the reef in the huge cyclone swell we received before Easter. He ended up having to duct-tape the board for the comp to hold it together.

When's his next surf contest?
We have the Independence Cup in July.

After gaining all this attention, do you think it's made a positive impact on Kalotiti? And on your organization?
Given that we were able to source a number of boards for our programs from this one appeal, yes, it definitely has had a positive impact on surfing in Vanuatu. We hope to receive more surfboards and surfing equipment as more people have come forward wanting to donate and assist with the logistics of getting them here.

Surfers in Australia and New Zealand can find local drop-off points for donations.