The Corona Bali Protected presented by Hurley, Stop No. 5 on the World Surf League (WSL) Championship Tour (CT), continued today in dreamy, three-to-four foot (1 - 1.7 metre) conditions. The world's best surfers were treated to a taste of perfection as Keramas continued to deliver for women's Round 3 and men's Round 4, leaving just eight Quarterfinalists remaining in each division. Here's how it all unfolded: Sally Fitzgibbons is having a slow start to the 2018 CT compared to previous years. Today she faced the tough task of taking on Malia Manuel and former WSL Champion Carissa Moore in Round 3 in pumping surf. Fitzgibbons sat deep with priority when the best wave of the day rolled into the lineup, and she dropped late into a dredging tube. After skillfully navigating two deep sections, Fitzgibbons came flying out of the tube and executed two powerful carves. She was rewarded with a near-perfect 9.93 (out of a possible 10), the highest single-wave score of the event so far. This left the two Hawaiians to battle for the second advancing position, with Manuel edging out Moore in a tight and dramatic finish. 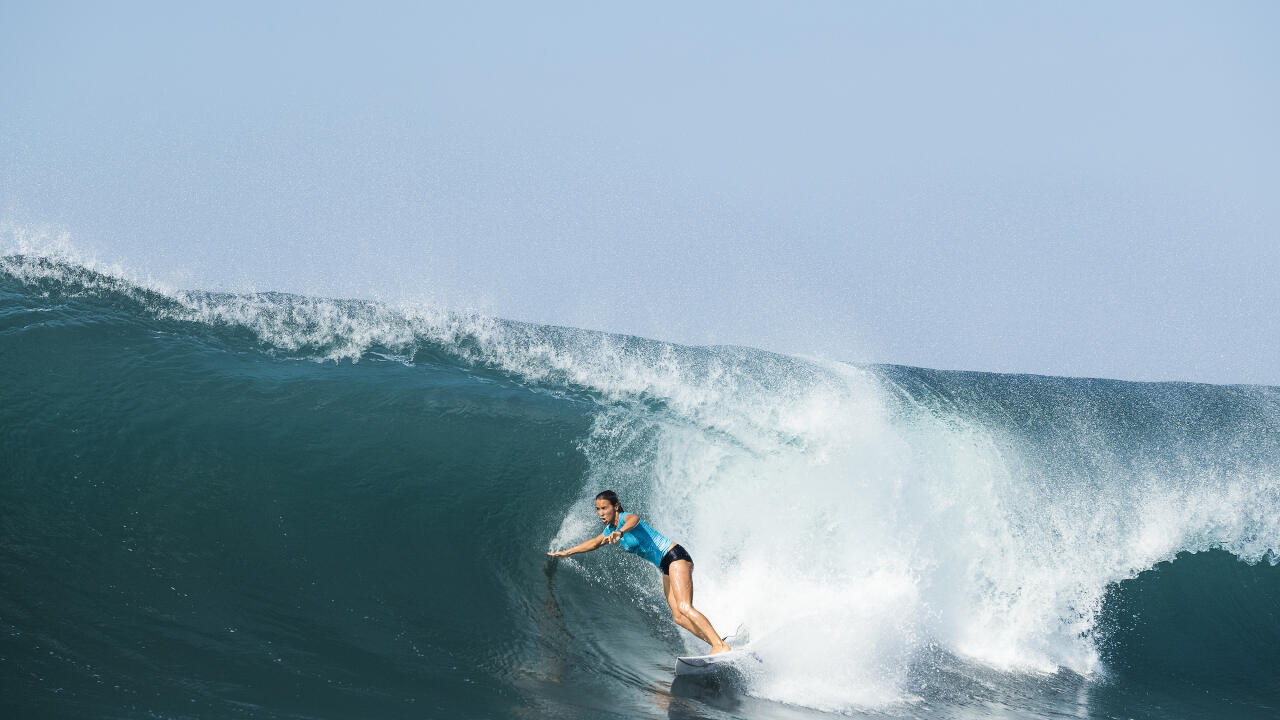 "When you have priority and you see a wave like that it's hard not to get too excited," Fitzgibbons said. "Inside the wave I had to go through two sections and I was thinking, ‘I can do this.' Then when I came out I was so stoked. It was such a tough draw with Carissa and Malia. My first wave didn't work out so when I got that good one, it took a bit of pressure off and now I'm through to the Quarters."

Reigning, two-time WSL Champion Tyler Wright made a mid-heat strategy adjustment during Heat 1 of Round 3 to overcome Tatiana Weston-Webb and Coco Ho. Wright struggled to complete her turns in the morning glare, so she opted to sit closer to shore and aim for the hollower inside waves. That strategy eventually paid off, as she booked herself a spot in the Quarterfinals with a winning heat total of 14.93 (out of a possible 20). Weston-Webb finished the heat in second and will also progress, while Ho was eliminated from competition in Equal 9th. Tyler Wright put on a solid performance at Keramas in Round 3. - WSL / Kelly Cestari

"I just couldn't seem to do anything right at the start of that heat," Wright said. "I was falling off and struggling to make a turn, so I knew I had to change things up. The glare didn't seem to affect me as much when I was getting barreled so I just looked for the hollower ones and it seemed to be a tactic that paid off."

Six-time WSL Champion Stephanie Gilmore snuck through her Round 3 heat against fellow Australian Keely Andrew and event standout Silvana Lima. In a slow heat for waves, each competitor had to make every opportunity count and that's exactly what Jeep Leader Gilmore did, finding the best wave of the 35-minute encounter to narrowly progress over Lima in the second progressing spot and Andrew, who was eliminated. Stephanie Gilmore is set on hanging onto the Jeep Leader Jersey in Bali. - WSL / Kelly Cestari

"The heat before ours had so many good waves so I was really excited to get out there," Gilmore said. "Once we did, it just seemed to stop, so waiting for the sets wasn't an option and I just had to take what came to me. My surfing felt really good, but because of how slow it was finding a rhythm was tough. I'm just happy to have made that heat and hopefully get a few more waves in my next heat."

Heat 3 was an all-American matchup between current World No. 2 Lakey Peterson, Sage Erickson and 2018 CT Rookie Caroline Marks. It was the rookie who dominated early, leading with a 15.00 point heat total. Her compatriots were left battling for second qualifying spot until Peterson posted a near excellent 7.70 to move into first and progress with Marks into the Quarterfinals. Peterson will now meet Manuel in Quarterfinal 3. "I really tried to keep busy in that heat to show my surfing as much as possible as the heats before ours were pretty slow," Peterson said "Then it just turned on and started pumping, the waves were amazing all heat, I felt like I had to take every wave. It's amazing that the WSL is giving the women the opportunity to progress our surfing in such incredible waves like this. Seeing Steph (Gilmore) as the Jeep Leader win in the heat before me definitely motivated me to win -- I'm keeping a close eye on her and what everyone else is doing. But at the end of I just want to focus on surfing my best and progressing through the event."

The final heat of the day was an all-Brazilian affair with 2015 WSL Champion Adriano de Souza taking on Italo Ferreira and Filipe Toledo. The heat had it all, tubes, aerials, fireworks, and it the end, it was Ferreira who won the heat and Toledo advancing in 2nd place. In the process. Toledo has amassed enough points to leapfrog Julian Wilson (AUS) and take the No. 1 spot on the Jeep Leaderboard, his first time since 2015. Filipe Toledo moves to No. 1 on the Jeep Leaderboard. - WSL / Kelly Cestari

"I have always dreamed of winning a World Title, so it's nice to take the Jeep Leader's Jersey," Toledo said. "But the work isn't over yet. Everyone on the CT wants to win and everyone is surfing so good, that's why there's top seeds losing all the time. I just need to focus on making heats and hopefully I can win this event and make it two in a row."

Michel Bourez had an absolute ball in his Round 4 heat win over Willian Cardoso, who also advanced to the Quarterfinals in second position. Jesse Mendes was eliminated with an Equal 9th, the best result of his Rookie season. Bourez threaded tube after tube and had the Keramas crowd on their feet with an incredible display of barrel-to-carve combos. Bourez will now take on Griffin Colapinto in the Quarterfinals when competition resumes. Michel Bourez is right at home in the tube. - WSL / Ed Sloane

"You know when the conditions are perfect when you forget about the competition and just focus on trying to catch more waves," Bourez said. "This wave really suits my surfing, I love getting barrels and doing big turns. I'm not a guy that likes surfing small beach breaks -- I'm a big guy and I like waves that have a lot of push. I have done well here last time, but I am not thinking about it really, there's a lot of different guys on Tour now so it's different."

Wildcard Mikey Wright yet again solidified the decision to provide him with a spot at the elite level, booking a spot in the Quarterfinals at the Corona Bali Protected. Wright trailed CT veteran Adrian Buchan and 2018 CT rookie Colapinto for the majority of the heat until he unleashed a series of committed power hacks to snatch first place. Colapinto then followed and added some of his progressive flare to move into second, leaving Buchan eliminated from the event. Mikey Wright on the fire at Keramas. - WSL / Kelly Cestari

"I pretty much had to surf a whole heat in about five minutes because I needed two waves," Wright said. "I'm happy to be into the Quarters, we have had such perfect surf for this event, I hope it keeps on pumping." 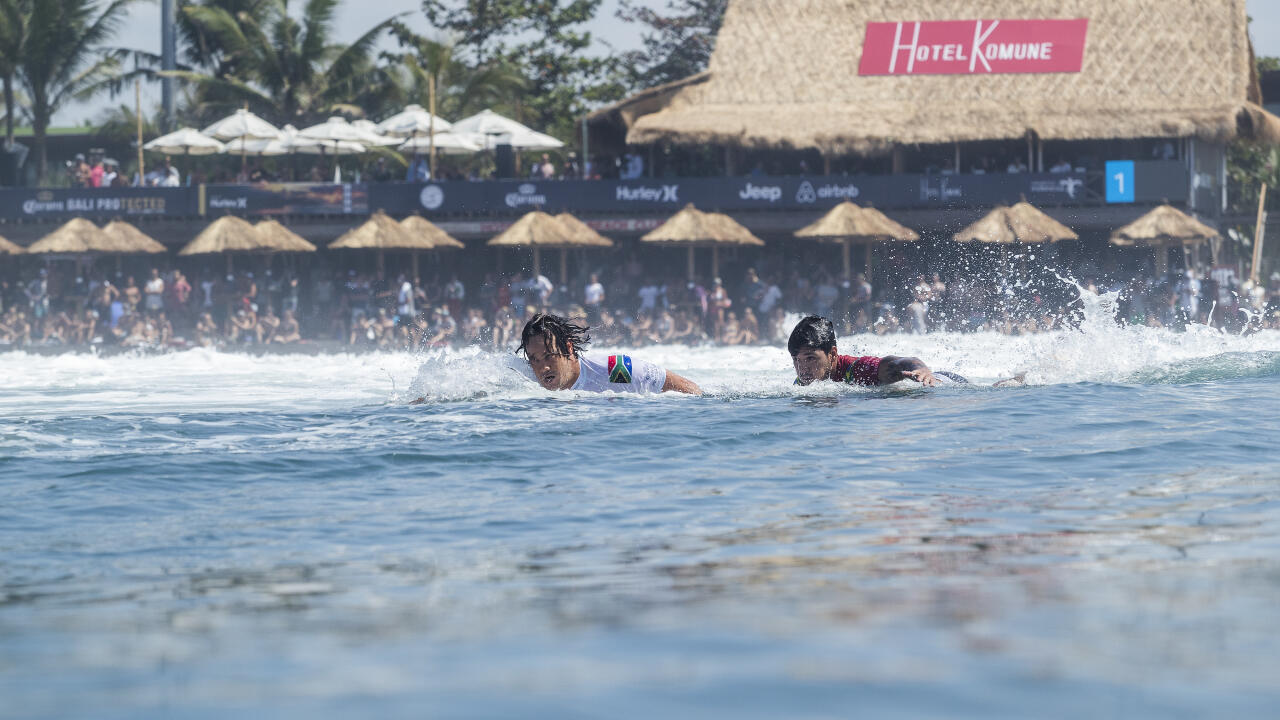 Jordy Smith and Gabriel Medina in one of the best paddle battles in recent history. - WSL / Kelly Cestari

Heat 3 of Round 4 was one of the most intense battles in competitive surfing as three of the CT's most passionate competitors, Gabriel Medina, Jordy Smith and Jeremy Flores, matched up for a spot in the Quarterfinals. While Medina and Flores fought for priority, Smith played his own game taking control of the heat and stayed separate to the others. Toward the end, Smith engaged in a fiery paddle battle with Medina with the two bumping and splashing in an attempt to gain the all important first go at a wave. In the end Smith took the honors with Flores finishing in second leaving the 2014 WSL Champion Medina to be eliminated in equal 9th place. Jordy Smith letting his surfing do the talking at Keramas. - WSL / Kelly Cestari

"I knew that those guys were going to peacock pretty hard and battle for priority so I just opted to keep to myself," Smith said. "The waves are so pumping and clean you can almost get over excited excited to alot of it is just staying calm and not over-surfing. That paddle-battle was crazy; He brushed my leg and I thought it was an accident then when it happened again I thought, okay, let's go. It's time to catch my breath and get ready for tomorrow."

Check back tomorrow for the call at 6:30 am WITA and watch live daily on WSL.com and Facebook.