Solid West coast perfection greeted the contestants on day three of the Vans Surf Pro Classic, back at the primary venue of Yoyos, Lamberts Bay. Light offshore winds and chunky overhead sets were the order of the morning, and contest organisers did not hesitate in sending out the competitors.

Yoyos is a perfectly shaped right and lefthander, with high performance walls going in both directions and conducive to high performance surfing. It's a wave that allows surfers to bring out their full repertoire, and really go to town with the judging criteria, based around speed, power and flow. 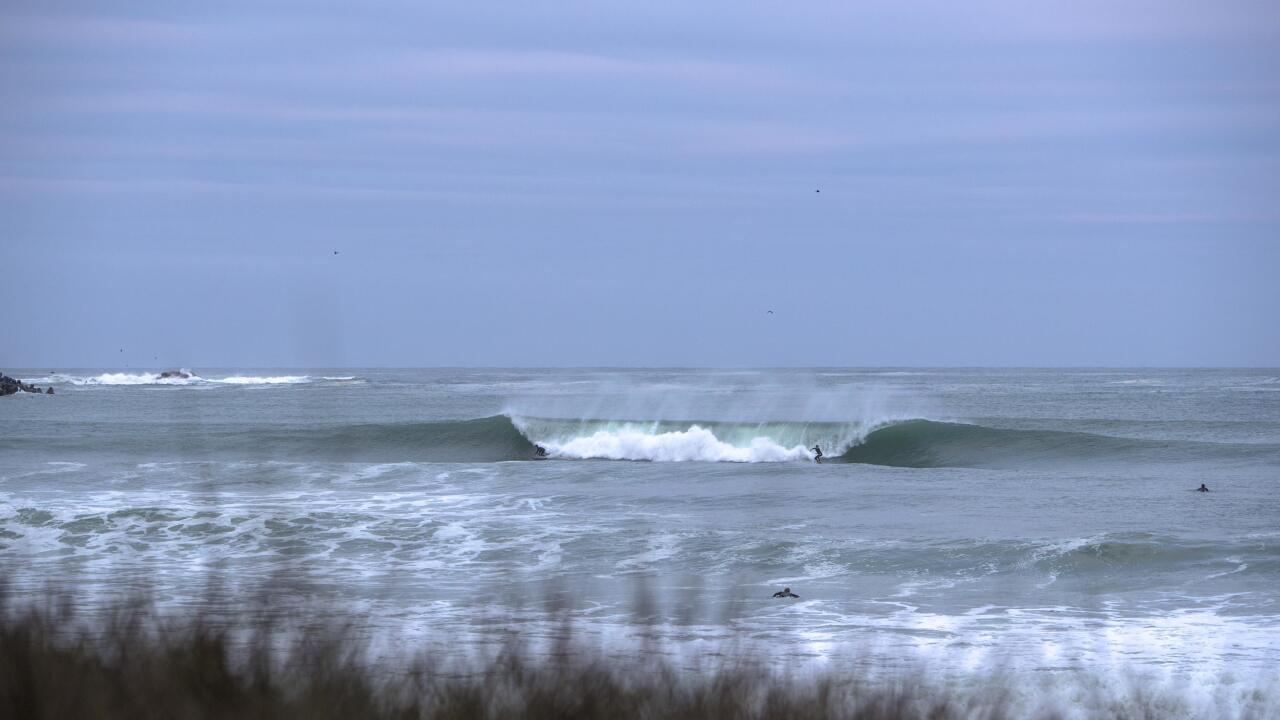 Perfect waves reeling down the Yoyos reef at the start of the final day of the Vans Surf Pro Classic. - WSL / Alan Van Gysen

One of the elements that the judges look for in each surfer is variety. Jeffreys Bay surfer Matthew McGillivray was the surfer who did just that in his men's Semifinal, with a massive aerial rotation, followed by a series of lip cracks and carves to be awarded yet another perfect score of ten points. McGillivray lip-launched into the wind, and dropped from the sky for one of the biggest airs of the entire event and it was a unanimous judging decision to award him a perfect score.

His opponent, David Van Zyl, surfed impressively and performed some huge carving moves on the open faces, as well as launching some big hits in the massive shore dump, but couldn't match that ten-pointer. Van Zyl can go home with his head held high, as he claims the top spot on the WSL Africa QS rankings after this event, stealing it from Jordy Maree. In the other Semifinal it was fellow Jeffreys Bay surfer Dylan Lightfoot who surfed a fast and exciting heat against natural-footed Durban-based surfer Beyrick De Vries. Despite having a good event thus far and surfing on-point, De Vries couldn't buy a second scoring wave out there, and bowed out from the competition, making it an all-Jeffreys Bay final for the men's QS 1,500 event. Excellent surfing throughout the event was not enough for Beyrick De Vries to advance to the Final, and he ended up in third place. - WSL / Ian Thurtell

Over at the JQS 1,000, it was an international flavored kind of day, with Eli Beukes (South Africa), Eduardo Motta and Daniel Templar (Brazil) and Dylan Groen from Germany making up the Semifinals. Beukes and Groen both surfed confidently in their respective Semifinals, and won through to the Final in this division. As the southerly wind start blasting cross-shore through the now-windy lineup, the two surfers relished he strong conditions, both hunting for the best set waves. The Final was a tight affair, with both surfers going toe-to-toe, but it was the stoked young Kommetjie surfer Beukes who took the winner's trophy at the final siren.

Beukes is a former local surfer, who actually grew up in the Lamberts Bay area and knows all the waves like the back of his hand.

"I'm super stoked that I've jumped up the rankings because one of my goals for the year is to qualify for the top four who go to the World Junior Championships in Australia, " said Beukes after his first JQS 1,000 win. "I've always wanted to win this event because I grew up here in Lamberts Bay so to finally win it is amazing." Reunion-born surfer Cannelle BulardCannelle Bulard was looking dangerous throughout the event, showing confidence and physical strength and fitness in the challenging conditions. She surfed her way to the Final, eliminating Natasha Van Greunen along the way in their Semifinal clash. She met up with Nicole Pallet, who had knocked out the stylish goofy-footer Faye Zoetmulder in their Semifinal. In tricky conditions it was Bulard who came out on top, banking two decent scores, with Pallet never really getting the high scoring set waves she was looking for. The girls handled the tricky conditions well, charging the right-handers and going on all the sets, showing style and courage in the solid conditions. In the men's Final, both Lightfoot and McGillivray were giving no quarter, with both of them desperate for points and prize-money. Both surfers are seasoned WQS campaigners, with McGillivray having just returned from competing in the Ichinomiya Chiba Open QS 6,000 event in Japan. Dylan Lightfoot surfed fast and tight, but was not able to wrest the winner's trophy from McGillivray. - WSL / Ian Thurtell

Lightfoot started out strongly with a 7 point ride and added to his total with a 7.75, giving him a very comfortable heat total of 14,75 before McGillivray answered with with a near-perfect 9.5 ride for a series of rail turns and carves, and an incredible aerial that he landed cleanly to show that he wanted a win and nothing else.

With his confidence up, McGillivray found another good ride and unleashed a series of arcing turns to score 7.5 and take the lead before slamming the door on his opponent with another high-flying aerial that the judges rewarded with a 9.65 to put Lightfoot in a huge 19.15 combo situation. A stoked McGillivray now looks strong for the wildcard slot in the Corona Open J-Bay. This slot goes to the highest placed South African on the international WQS rankings after the Ballito Pro pres by Billabong. The next event on the calendar is the Jordy Smith Cape Town Surf Pro pres by O'Neill that will take place from 14-17 June in Cape Town. It is the fourth competition in the popular five-event City Surf Series that will culminate with the Volkswagen SA Open of Surfing pres by Hurley that takes place from 19 - 24 June in Port Elizabeth.

A powerful groundswell and a possible venue change for opening day in Lamberts Bay.