For the last several seasons Lakey Peterson has been identified as an outside threat for a World Title run. When she won the US Open of Surfing during her rookie season in 2012, she was showing all the ingredients of a Champ. Yet, heading into this season after six years on the WSL Championship Tour (CT), she had yet to finish in the Top 5 on the Jeep Leaderboard. Like all athletes, she's battled through a consistent string of mental hurdles and physical injuries. Today, however, the 23-year-old has finally clicked into gear. She's claimed two huge CT wins this season -- her first time back on top of the podium since 2012 -- and she's reclaimed the Jeep Leader Jersey after her latest win in Bali. The tide has clearly turned in Lakey's favor, and here are five reasons why. With two wins already under her belt this season Peterson is breaking out big. - WSL / Kelly Cestari

1.) Water Time: Peterson was born an athlete, and still loves a wide variety of sports. She's also a fitness freak who loves her training and the gym. And while her passion for a good workout hasn't changed, she's dramatically increased her time in the water this year. According to her coach, Mike Parsons, Lakey's spending up to five hours a day in the water, which is double her daily amount in the past. The extra time works all the right muscles, gets her more familiar with her equipment, and most importantly, fine-tunes her brain power, heightening her intuitiveness. 2.) Thomas Allan: Lakey joined the Tour as a wide-eyed 17-year-old brimming with confidence, but life threw her more than a few curveballs in the time since. One of her biggest aids in dealing with it all has been her steady beau, Thomas Allan, a hardcore surfer from Torquay, Australia. Allan has been a rock-steady force in Lakey's life, and vice versa. Earlier this year the couple got engaged in Ojai, California, and by all accounts, Lakey's never been happier. The power of this pair planning a life together has been a huge force multiplier, and it's just getting started. In June, Lakey will be spending ample time with Thomas training at Winkipop before her July trip to J-bay. 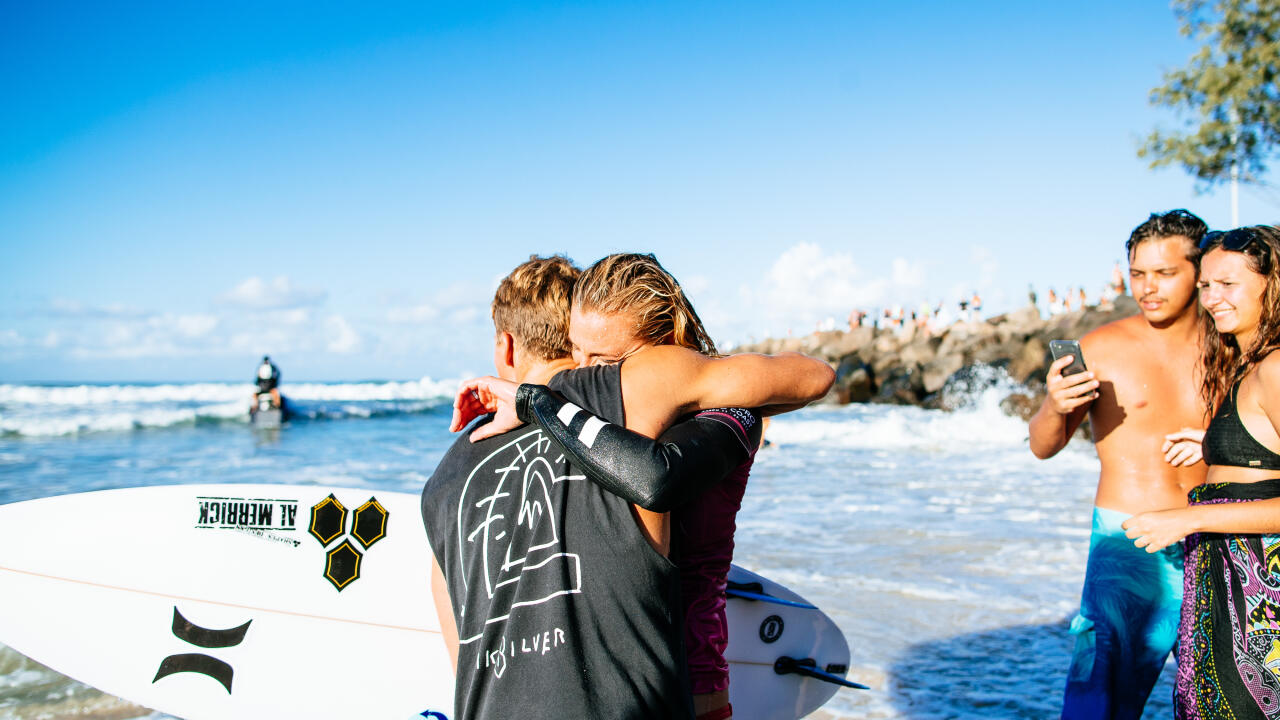 3.) Mistakes Redux: Fear of failure used to straight-up cripple Peterson. She'd die a thousand deaths with each mistake made, and that fear got the better of her at times. Being your own worst critic is healthy , but too much tearing yourself apart is undoubtedly destructive. Lakey's made huge strides in loosening up on the losses, and rolling with them, which wasn't always the case. "She's way more comfortable with the idea of learning from her mistakes," says Parsons. "And it's not lip service, she really believes that now. She trusts it. So she's not getting down on herself like she was." Rookie sensation Caroline Marks has benefited quite a bit from her bouts with Lakey, and vice versa. - WSL / Kelly Cestari

4.) Sparring Partner: One of Lakey's best sources of motivation this year has been Caroline Marks, her go-to sparring partner. Marks is Parsons' other star pupil, and he regularly places the duo in head-to-head combat situations. The 16-year-old rookie sensation is a fierce competitor, and by pushing each other routinely, there's no question that they're both benefiting. Peterson's working overtime to chase the meaty stuff these days, and it's working wonders for her confidence. - WSL / Kelly Cestari

5.) Big Water: Another big confidence-booster for Lakey this year has come from her adventures in the big- wave arena. She and Caroline have joined Parsons on several trips to Oahu's North Shore and strike missions to Todos Santos. In addition, she's sneaking in a handful of chilly big-wave sessions in with Thomas down in Torquay. The confidence gained by these harrowing sessions is immediately transferred to the rest of her approach, and it's likely to come in handy down the line.