The Longboard Pro Biarritz launched today in classic longboarding conditions at Côte des Basques with clean, peeling two-to-three foot rights and lefts. Competition started early with the opening rounds, then went on hold through the high tide and resumed with the men's Round 2 as well as the quarters of the BTZ Belza Classic later tonight.

Edouard Delpero, number 2 in the world last season, showed everybody why he's one of the best longboarders on the planet. The Biarritz local hand-picked two of the best waves seen all-day and rode the nose of his longboard basically from out the back into the shorey. He gracefully managed flatter section by slightly shifting his weight back and keeping only five toes out while when the wall stood up went right back to hanging ten. His efforts first brought in a 9.60, but as an even better wave came through, judges could only award him the first perfect 10 point ride of the event. When you don't see the board is usually a good sign. Edouard Delpero, ten out again. - WSL / Damien Poullenot

"There weren't that many waves but I'm stoked I got the good ones," he said. "I didn't over surf them either, they were just perfect so I did my thing and got some nice scores. It's awesome to have an event here at home with all our friends around. I still have some in the tank so hopefully I'll get a few more just like that. Either way I'm sure we'll give a great image of our beach and waves and hopefully encourage people to come check it out."

Up until then it was Devon surfer Jack Unsworth who had put together the strongest combinations of nose rides and classic turns to build an impressive 17.74 heat total. Third in Espinho earlier this year in massive surf, Jack showed he's right at home in the smaller stuff as well with one of his best performances so far on the WSL tours. 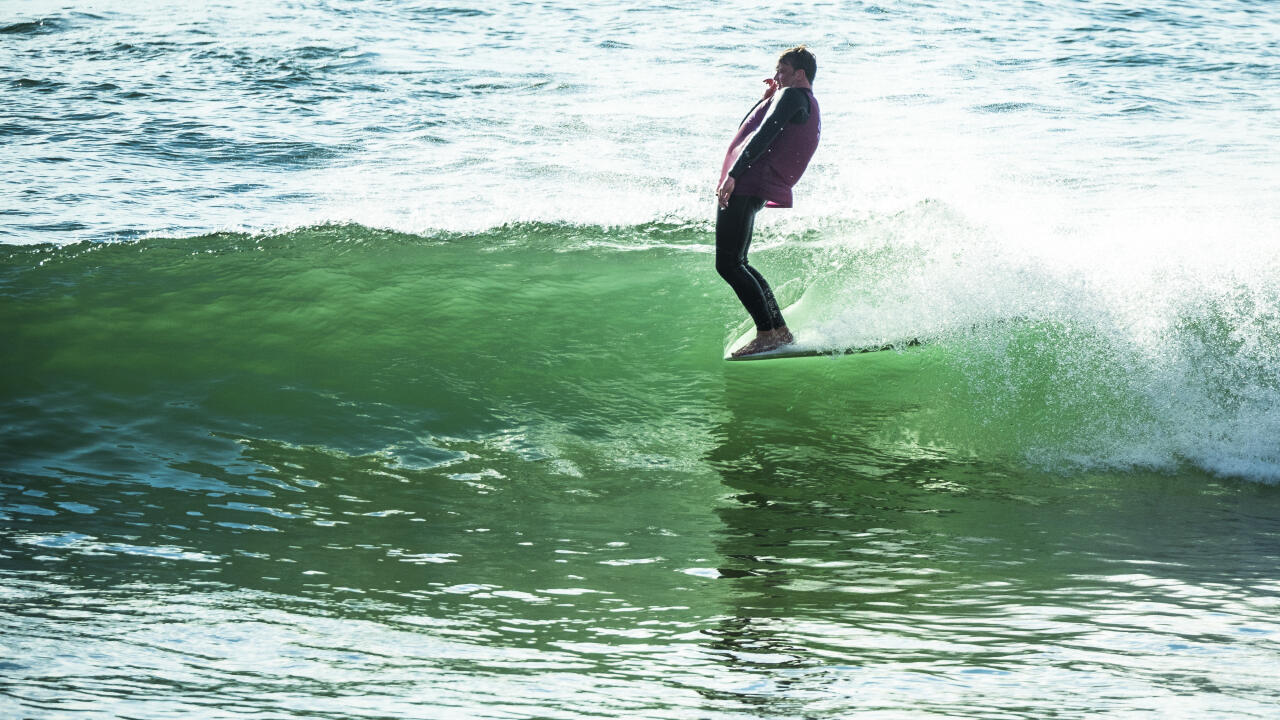 "I've never really scored above a 7 before at the WSL level so it's sick to get a couple of big ones today," he stated. "I feel really comfortable riding this new board my shaper Skindog and I came up with and the waves were absolutely perfect for it. I'd love to make a final, there are some big names in this event so I'll need to take down some of them. I'm at university now and haven't had much time in the water lately and that's maybe the key factor here, every time I paddle out I'm really excited and have no pressure at all."

Earlier in the day, the women's Round 1 was completed on the incoming tide. The usual suspects all made their mark on Day 1, Alice Lemoigne and Justine Dupont leading the way. Perennial threat Justine Mauvin entered the event late yesterday but made sure it was worth it as she cruised her way into the Quarters as well.

The local Biarritz wildcard Zoe Grospion held her head high against Dupont (a former runner-up in the world), as she led most of their 25-minute bout with good surfing. But Dupont's late charge pushed her back in second place, an advancing position nonetheless that will see Grospiron in the Quarters when the event resumes. Zoe Grospiron, all smiles and into the Quarters. - WSL / Damien Poullenot

"It's my first professional event and to have it at home in such nice waves is a real gift," Grospiron said. "I was so happy to have a heat with Justine, I truly admire her. The goal was to advance so, so far so good. I've been injured for a while and have only started surfing again like a week ago, so I'm out here with no pressure, just trying to soak in the whole experience. All the girls have years of experience on me, so my goal is mainly to learn all I can from them, see what they do and how they do it."

A virtually unknown (at least here), 17-year-old Hawaiian named Mason Schremmer stole the show and posted the round's highest combined heat total with 13.97. The light regular-foot found the best waves and glided gracefully, using all 9+ feet of her board to seduce the judges' panel. "It got a little slow in our heat but there were a couple at the beginning that ran through on the rights and it was really nice," Schremmer said. "It's my first time in France and I really like it, I've always wanted to come visit and with a couple contests going on it was the prefect occasion. Depending on how the contest goes we'll try to drive to Spain as well and check it out."

The women will be up first Saturday morning with a call at 7 a.m, while the men will come in at 8:30 a.m for a potential start of their Round 3.