In a four-day speed blur the Corona Open J-Bay saw epic conditions, emotional endings and, in Filipe Toledo, a paradigm shift in what can be done at the world's best wave.

"Gone are the traditional lines at J-Bay, this is now Filipe Toledo's wave," WSL Commentator and 1989 World Champion Martin Potter said after the Brasilian secured back-to-back Corona Open J-Bay victories. "When it is Finals Day something just clicks," Toledo said simply, "It's either go big, or go home." In a remarkable statistic this was Toledo's seventh Final win out of the seven he has contested. In his career he's never had to go home. Toledo also claimed the Jeep Leader Jersey and emphatically set his sights high. "I want the Yellow Jersey and I want the Title as much as anyone," he said. "I'm ready to fight. I'm ready to work harder than anybody. I'll do what ever it takes to win. I feel it's my turn." After a performance of such control, power and speed (surf journalist Sean Doherty described it best when he wrote, "Phil flew down the line so fast you felt his skeleton might break free and surf the rest of the wave without his body,") it will now take something, or someone, pretty special to jump the World Title queue. 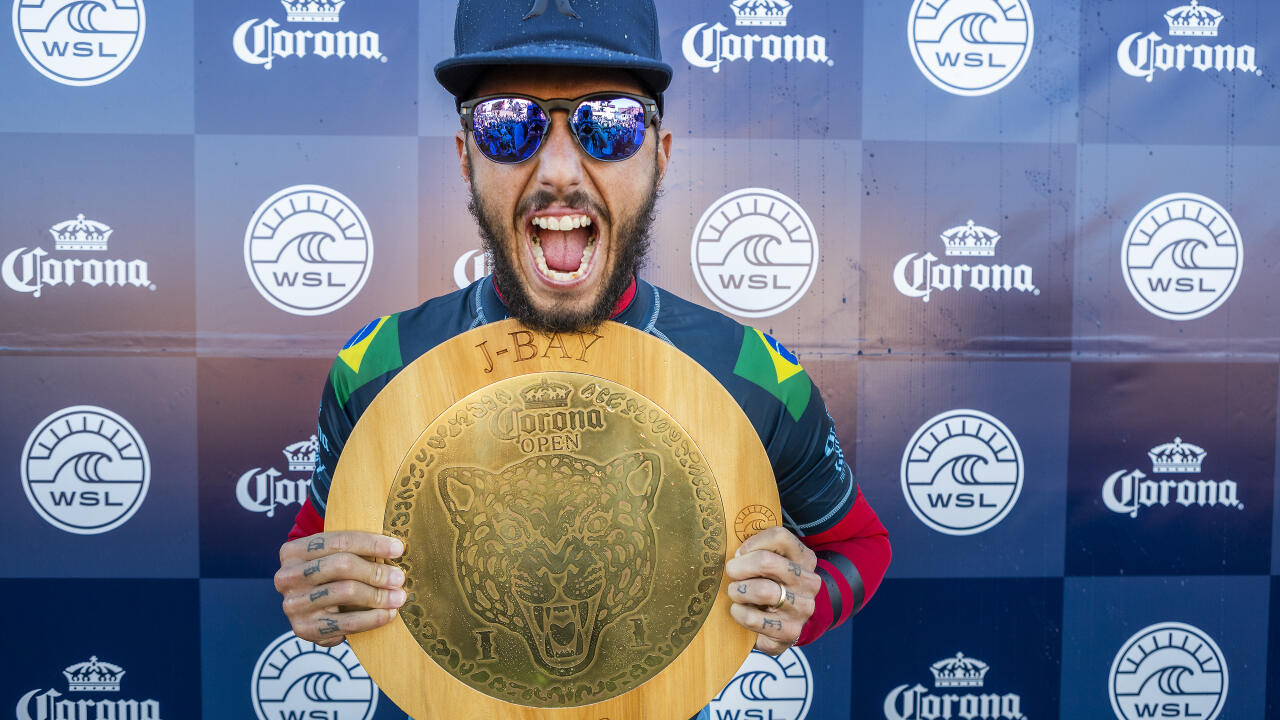 Jordy Smith Is Fired Up

"It fired me up to surf against Julian," said Jordy Smith after defeating the Australian in their Quarterfinal. "Absolutely I wanted to win the heat. I thought I won in Uluwatu, so it was motivation for sure." Smith has been on record airing what he perceives to be a series of poor judging decisions that have gone against him in recent events. While the rationale may be debatable, the emotion is real. You feel his jets won't have cooled after a close Semifinal loss to Wade Carmichael in front of a roaring home crowd, but the motivation has hauled him back into the top 5 after a poor start to the year. While he may have given Toledo too much of a head start to win a World Title, if the South African stays this motivated he will play a big part in who does.

Jordy Takes Down Julian
1:55
Despite going on a shark hold during the previous heat, the South African is looking dominant, getting the edge over Wilson in the Quarters.

Wade Carmichael Is the Real Deal

Two Final appearances in his rookie year has seen Wade Carmichael move up to World No. 6 and cement his slot on the CT roster for 2019. With his board echoing the famous 1980s spray of his fellow Central Coast legend Ross Clarke-Jones, Carmichael's surfing harks back to a purer, less complicated age. Part of the appeal is that his act is fundamentally based on a genuine love of surfing. He stated that he didn't want to fall off waves, not because it harmed scoring potential, but because he simply wanted to do more turns. Yet his competitive sense is as clear and catch-free as his surfing. Bigger-name opponents, or the odd shark sighting, cause no deviation from his plan and pressure situations only galvanize his self-belief.

Carmichael Sets Pace Early
0:27
The rookie earns an 8.17 to take down Joan Duru, who was left out the back with little to work with at the Corona Open J-Bay.

Parko is Out, Long Live Parko

At the start of the event Joel Parkinson announced his retirement, effective at the end of the year. It might take a little while to assess what Tour life will be like without Parko, but for surfers on the CT the impact will be more immediate. "I'm so stoked that I got to be on Tour with you for three years," posted Conner Coffin after the announcement. "Such an honor to surf with childhood heroes and get to hang, laugh, and have some beers. Thanks for showing us the ways." Coffin, along with Griffin Colapinto, are probably Parko's youngest and most fierce acolytes and both channeled their inner Parko to achieve great results at J-Bay. Fitting then that after Parkinson was knocked out by Coffin, the veteran handed over his jersey to the Californian. "It's something that I would have cherished if someone on Tour had done that for me," Parkinson said of the hand-off. "I've dedicated my life to this Tour and hopefully I've made some type of imprint here." With Coffin and Colapinto now carrying the torch, the legacy is assured. It is no surprise that Wade Carmichael's Final appearance netted him the greatest rankings' leap after the Australian moved eight places from 14th to 6th on the Jeep Leaderboard. The next biggest jump was made by Kanoa Igarashi. The Californian-based Japanese surfer had registered a trio of Round 2 losses out of the five events surfed and, in his third year on the CT, was slipping towards the relegation zone. Igarashi claimed it was the combination of extra time spent at Jeffreys Bay last year and sound coaching from two-time winner Jake Paterson that enabled him to climb six places and into the safety zone. Conner Coffin also took a giant step to requalification, jumping five places to be the World No. 11. After yet another powerful performance at J-Bay he can now look forward toward the top 10, rather than behind him at the relegation scrap.

Kanoa's Uprising
1:25
The 20-year-old earns an 8.00 to overthrow Sebastian Zietz in the Quarterfinals of the Corona Open J-Bay.