Editor's note: Get your feet wet with WSL Fantasy Surfing at the US Open of Surfing starting July 30 in Huntington Beach, California.

J-Bay! That was some electric surfing. Five of the highest heat totals of the year went down down, including the highest of the year: Filipe Toledo's 18.9 in Heat 2 of the Semifinals. How did your Fantasy team do?

Check out what our resident quant team uncovered.

Right-hand point break killers Stephanie Gilmore and Filipe Toledo took home the trophies - but check out these four surfers who were make-or-break for fantasy teams. 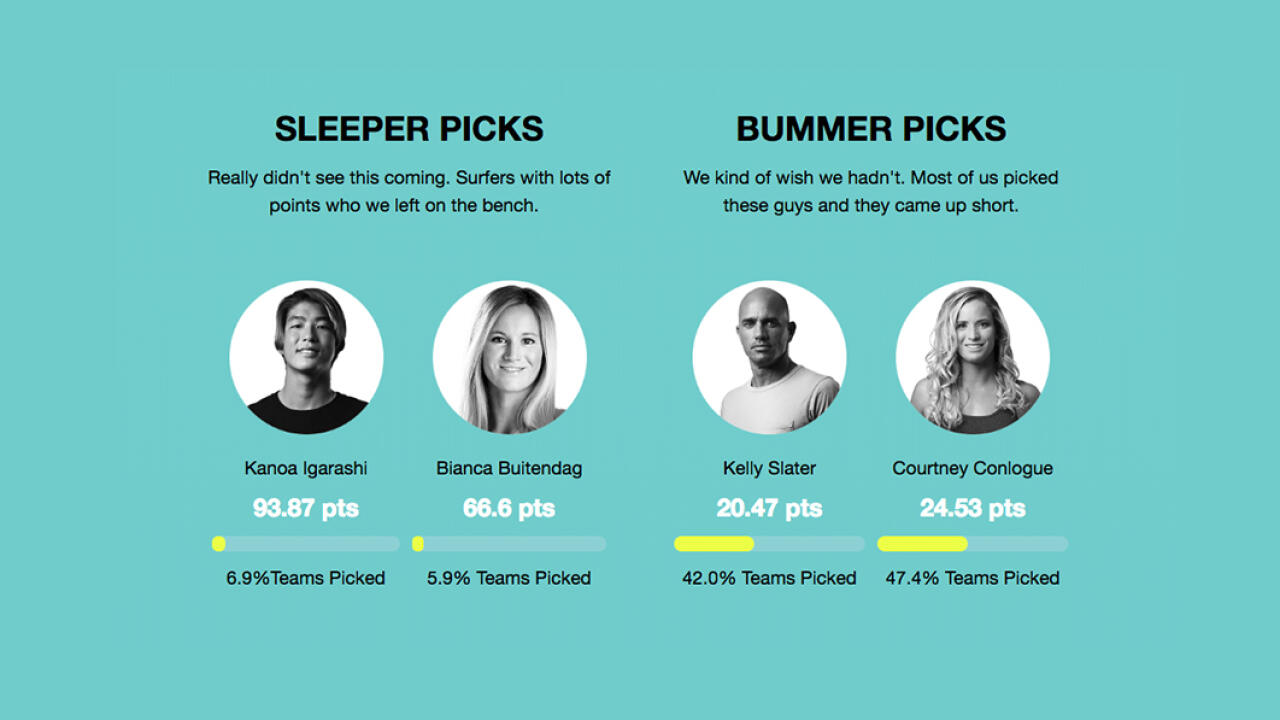 Kanoa Igarashi: The California-based surfer has been poised for a result like this for a while, but only 6% of us believed in the dream. Kanoa is heating up, and deserves serious consideration next time you set your lineup. Think he can back up his semifinal run in Tahitian barrels?

Bianca Buitendag: The South African may have fallen off your radar, but the powerful goofyfooter has clocked plenty of hours at J-Bay and brought her experience and backside attack - big time. Always beware the wildcard!

Slater + Conlogue: With both Kelly and Courtney, fantasy players bet on rock-solid performers who just came back from big injuries. Both looked sharp in their returns to the CT stage, but neither were up to beating the best. Think they'll be ready for the next beaches and barrels?

Men: 0 (But, Almost 1!): Global event winner APEA was thisclose to perfection, and only one pick away from achieving the sublime. He went with Adriano de Souza in Tier B, but needed Sebastian Zeitz to be the first faultless player of the year.

Zeitz Sneaks By! APEA's perfect lineup was on the line when Sebastian Zeitz, Adriano de Souza, and Filipe Toledo squared off in Heat 3 of Round 4.

Seabass and Adriano had a decisive back and forth with only 3 minutes left, where Sebastian pulled ahead with a 8.23 and Adriano just missed getting through by falling on his last wave.

Had Adriano made it, APEA would have had the first men's perfect lineup of the year.

Steph's Tie Breaker! Stephanie Gilmore's win was almost halted by Bronte Macaulay in Heat 3 of the Quarterfinals when the the two finished with an identical two-wave score of 15.00.

But, in this first-of-the-season tiebreak scenario, league rule article 121a states that the tie will be split by counting each surfer's best wave score.

Tahiti is a whole different ball game. Dust off your barrel specialists and take a close look at the rookies who loves tubes.