A solid swell built overnight in Pantin and the playful three foot rights on offer yesterday mutated into big six foot white walls and a lot of closeouts. With 140 heats to be ran in Pantin, someone had to go out there and the men in the QS 3,000 Pull&Bear Pantin Classic Galicia Pro stepped up to the plate.

Charly Quivront was the first surfer in Round 3 to put a good score on the board, a 7.00 for a couple of forehand carves and a closeout snap to take his ticket for the top seeded Round 4. Fresh off a Semifinal finish in Anglet, the young Frenchman was patient in trying to find his gem in a rough lineup and his strategy paid off.

"I didn't think we'd go up today and I just arrived from Anglet so I didn't have much warm up for this one," he said. "It's actually pretty good to get into it right away and stay in the same vibe I was in last week. Conditions are so far from what we surfed last week but I'm happy I managed to adapt and get a win. I've been coming here for years so I feel comfortable and I hope we continue to have waves for the rest of the event."

Brasil's Lucas Silveira took out the following heat and opened up the lineup when he found a fun little left on the inside. Up until then, the lefts had been underscored as the wave face was thicker. But Silveira's rolled in nicely and gifted him a couple of sections to go vertical on his backhand. With two equal fifth results in the last two events in Europe, the powerful regularfooter has a chance to turn his season around in Pantin. The morning heats had some solid size. Enzo Cavallini braces for impact in the lip. - WSL / Damien Poullenot

"Only 20 minutes out there is tough," Silveira reflected. "I started quite badly with a super long wave for only a 3, but then I managed to find that insider and that was much better. It took me forever to get back out after that one, but I managed to keep improving my back up a little bit. My year has been one of the worst before I came to France and I already made more heats in two events than the whole season so I just want to make a few more."

Timothee Bisso took good note of the fact that the lefts now had potential. Sitting in second with two average scores and under pressure from his opponents, he found a good set and logged in a series of radical forehand snaps to post a 7.50 and take a last-second win over Miguel Blanco, Wesley Leite and Dean Bowen. 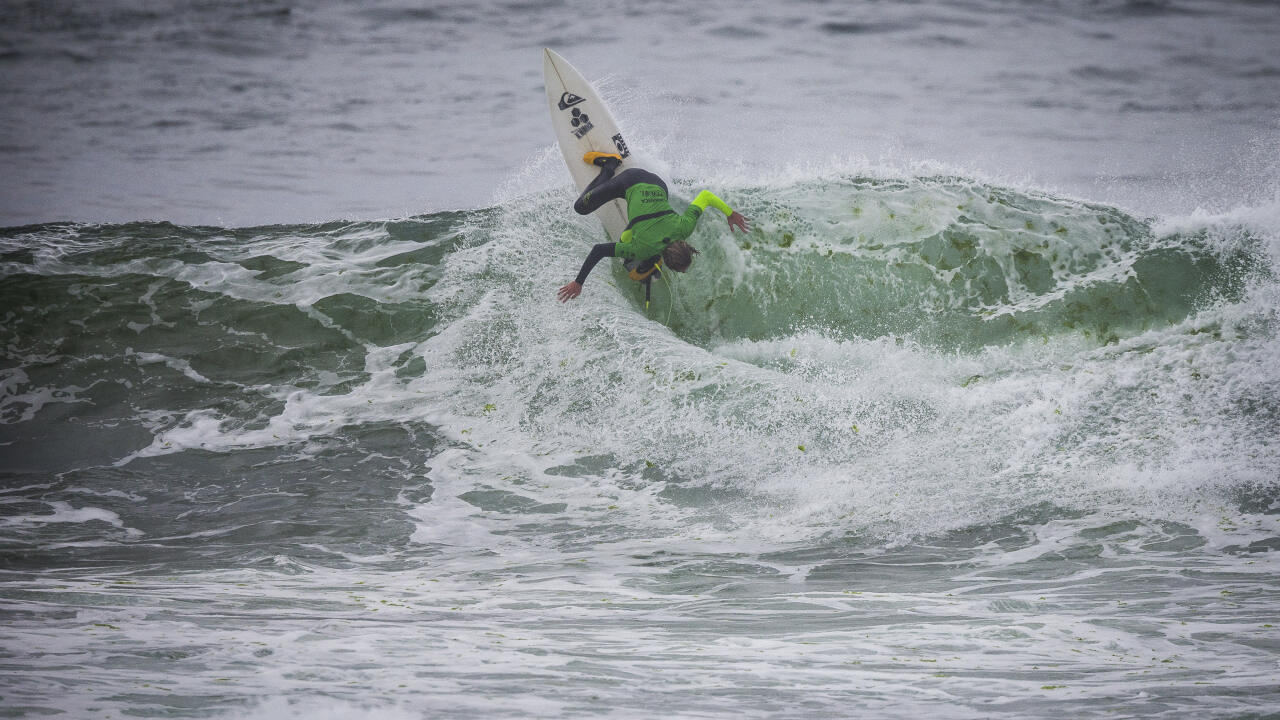 John Mel on a foamy one with seaweed, a perfect combo for disaster. - WSL / Damien Poullenot

"I was more focused on the rights at first because I saw a lot of good waves in the previous four heats," Bisso said. "But then I didn't have priority so I drifted away a little bit and that left came to me. We don't get to decide what the ocean does and you always need to have an open mind out there. I feel like my surfing is there but I need to work on heat strategy and things like that. I try to never be satisfied with a heat and I always want to improve, because anybody with the right wave can post a big score really."

Rafael Teixeira took out the final heat of the day and advanced alongside Samson Coulter into Round 4. Event officials have already called the men OFF for Wednesday and will concentrate on the women's QS 6,000 division, starting with a call at 9 a.m.