Smooth, deliberate, enterprising surfer from Coolangatta, Queensland, Australia; world champion in 1976, with adjunct work in coaching, writing, publishing, boardmaking, marketing, and surf fashion. Townend was born (1953) and raised in Coolangatta, the son of a hotel manager, and began surfing in 1967.

By the mid-'70s, two dozen surfers were traveling from Australia to Hawaii to South Africa, on what was later described as the "gypsy circuit," to compete in a loosely arrayed set of professional contests. In 1975, Townend helped create the Australian Professional Surfing Association, which formed a small domestic pro tour; in 1976 he was one of the leading voices for the creation of a standardized international pro circuit.

Hawaiian organizers Fred Hemmings and Randy Rarick launched the International Surfing Professionals tour in October of that year, retroactively scoring nine events from earlier in the season, then running five events in Hawaii to come up with a 1976 world pro champion-Peter Townend. 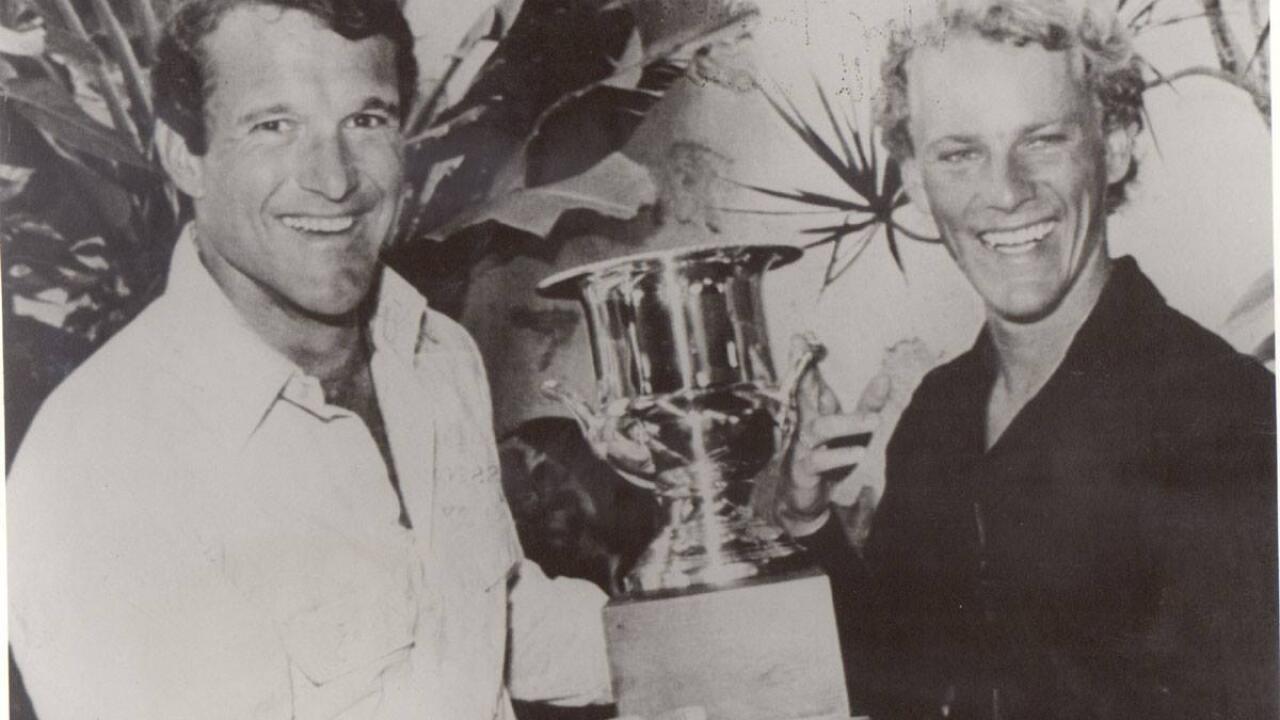 The 23-year-old Queenslander didn't win a contest in 1976, but was consistent throughout, making the finals in nearly half the events. His total prize money for the year was about $7,500; he worked between contests as a shaper for Gordon & Smith Surfboards in Australia.

Not a great natural talent, the diminutive Townend (5'7" 140 pounds) rode with great precision and intelligence, and his form was often compared to that of 1964 world champion Midget Farrelly, another exacting Australian. Townend had moments of flair, developing the full-body "soul arch" bottom turn, and riding aerodynamically inside the tube in big Hawaiian surf.

Townend also paid careful attention to his surf world image and persona, as he filled his wardrobe with designer clothes, grew a perfect pointy goatee, danced on tabletops at postcontest banquets, and cheerfully declared that he favored hot pink surfboards and surf trunks because he didn't want to "look like the average kook on the beach." In 1976, along with fellow Aussie Ian Cairns, Townend co-founded the Bronzed Aussies promotional group, ostensibly to bring more glamour, wealth, and attention to the sport. But the two surfers were ridiculed after turning up at contest sites in matching Bronzed Aussie velour jumpsuits, and by the end of the decade the Bronzed Aussies were largely ignored.

Townend competed part-time in 1977, spending much of the year stunt-surfing for actor William Katt during the filming of Big Wednesday, and his world rating dropped to 14th. He then rededicated himself to the world tour, finishing fifth in 1978 and 1979, then went into a long semi-retirement. Meanwhile, he'd become one of surfing's most prolific writers; in the '70s and early '80s he submitted dozens of feature articles to the American and Australian surf press; from 1975 to 1981 he wrote the "Surfing Today" column for the Sydney Daily Mirror; and from 1979 to 1980 wrote "Notes from the Pro Tour" for Surfing magazine.

In 1984 Townend began working for the Surfing ad department; two years later he was named advertising director, and in 1989 he became associate publisher.

Townend left Surfing in 1993 to work as the marketing director for Rusty surfwear, and in 1999 he was named as Rusty's global brand manager. (Townend himself had launched three short-lived beachwear lines: Soul-Arch Clothing, PT Designs, and Bronzed Aussies Sportswear.)

He returned to print media in 2000 as the publisher of Surfing. He also moonlighted as a cable television broadcaster, covering surfing events for Prime Network and ESPN. In 2003, Townend formed ActivEmpire, an action sports consultancy company. Peter posing with his art piece at the Surf Ranch in Lemoore, CA. - WSL / Steve Sherman