Straight-talking square-jawed surfer-organizer-politician from Honolulu, Hawaii; winner of the 1968 World Surfing Championships; founder of the Pipeline Masters, as well as the International Professional Surfers world tour; Republican minority whip in Hawaii's House of Representatives in 1990.

Hemmings was born (1946) and raised in Honolulu, one of six children delivered to a New York-born civil servant father and a Portuguese-American mother. The family was poor, and Hemmings, along with three of his siblings, contracted polio, though none suffered permanent debilitation.

Hemmings began surfing in Waikiki at age eight; in 1961 and 1963 he won the juniors division of the Makaha International contest; in 1964 he took the Makaha men's title (while earning all-league honors as a center on the Punahoe High School football team), then finished runner-up in 1965, and won again in 1966.

Hemmings's strengths as a surfer were power and consistency; he rode in a fairly narrow stance, drew elegant if somewhat predictable lines across the wave, and kept his maneuvers under control at all times, even while charging through the most critical sections. He appeared in The Endless Summer (1966), Golden Breed (1968), and other period surf movies.

Because Hemmings had nothing but disdain for anything associated with the late-'60s counterculture movement, it wasn't surprising that he had little enthusiasm for the concurrent shortboard revolution. The short surfboards, he said in a 1968 interview, "are absurd for Hawaiian surf. They don't work here." Later in the same interview Hemmings railed against "pot and hippieism."

In a result that surprised nearly everybody in the sport except Hemmings himself, he then went on to win the 1968 World Championships, held in Puerto Rico. 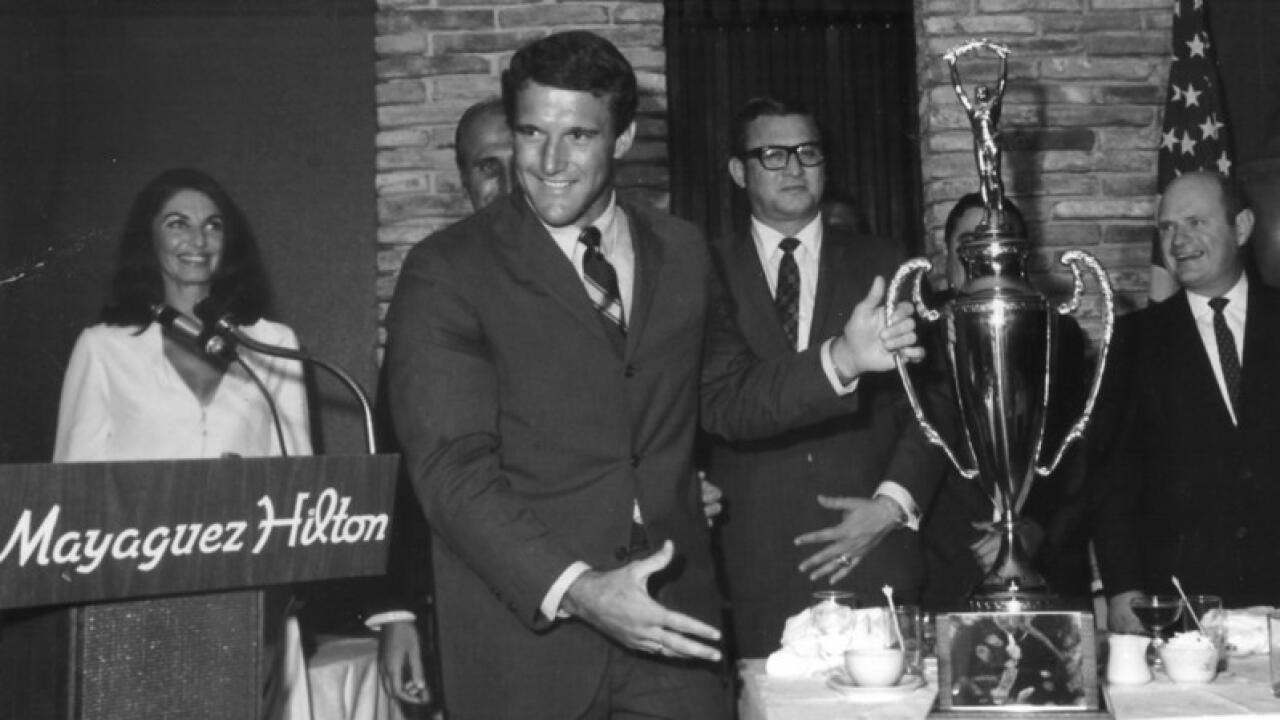 The World Championship trophy ceremony in Rincon, Puerto Rico (1968). Fred was the only surfer in a suit. - WSL

He used a longer and thicker board than the other competitors, but during the finals, held in beautiful six-foot surf, he rode without error to defeat 1964 world champion Midget Farrelly and 1966 world champion Nat Young, among others. "They were rock and rollers," Hemmings said of Farrelly and Young, in a remark that illustrated the distance between himself and surfing's psychedelic orthodoxy, "while I tried to waltz with the waves."

Hemmings arrived at the world championships awards ceremony dressed in a blue blazer, tie, and leather loafers, looking, he recalls, "like an IBM salesman at a Cheech and Chong convention."

Hemmings retired from competition in 1969, and turned his attention to creating, promoting, and marketing professional surf contests. From 1970 to 1978 he did color commentary for ABC's Wide World of Sports and CBS's Sports Spectacular during their annual surf contest coverage in Hawaii.

Fred Hemmings Pays Tribute to Pro Surfing's Icons
2:28
The driving force behind the original Championship Tour pays tribute to heroes past and present.

In 1971 he launched the Pipeline Masters, which soon became the sport's premier competition; in 1976 he was the driving force behind the formation of International Professional Surfers (IPS), the first worldwide surfing circuit and predecessor to the Association of Surfing Professionals (ASP) tour; in 1983 he founded Hawaii's Triple Crown of Surfing, a three-event mini-tour within the world tour.

"Professionalism" in surfing, as Hemmings called it, was a tough sell, particularly in the early years, and the iron-willed determination that earned Hemmings the nickname Dead-Ahead Fred, while crucial to bringing his vision to life, often put him at odds with surf society at large.

He returned to the subject of drugs in 1969, for example, saying, "there will be no room for dope" in the ranks of professional or amateur surfing.

A majority of surfers at the time were drug users to one degree or another, and even non-drug users had doubts about lumping surfing in with baseball, basketball, and football as a competitive sport. Professional surfing would nonetheless be created more or less to Hemmings's specifications, and find a niche in the sports world, even if rank-and-file surfers continued to show at best a passing interest in competition.

Hemmings was ousted as the head of the pro tour in 1982, following a coup of sorts led by Australian surfer-organizer Ian Cairns, as the financially struggling IPS was replaced by Cairns's newly created ASP. Hemmings retained ownership of Hawaii's world tour contests, but devoted himself mostly to business and politics.

In 1984 Hemmings accepted a seat on the Denver Broncos' NFL Board of Directors, and was elected to Hawaii's House of Representatives. 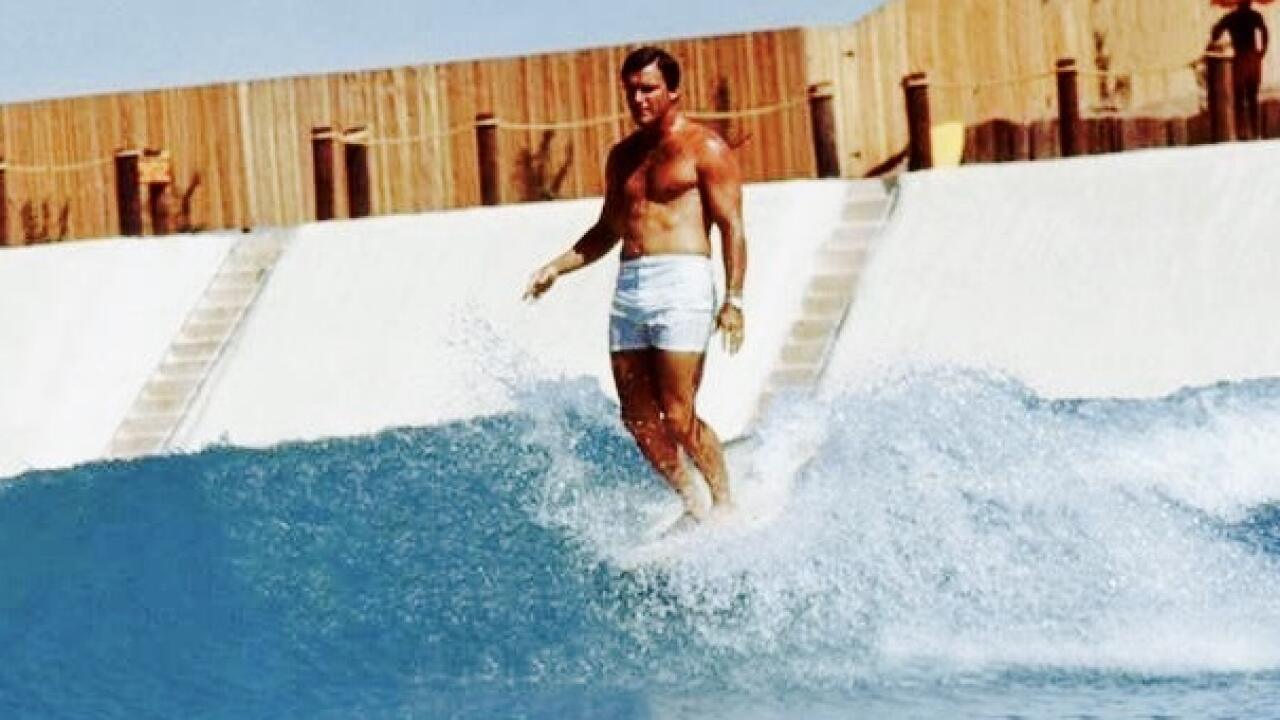 Fred riding the first man-made wave (1969) in Tempe, Arizona. He was the only one out surfing for several weeks. - WSL

He was a fiscal and moral conservative, and in 1988, returning to a favorite issue, wrote a letter to ASP Executive Director Graham Cassidy asking that the world tour "consider mandatory drug testing for competing surfers." The ASP declined (drug testing, weakly enforced, wasn't introduced in pro surfing until 2012).

In 1990, one year after becoming minority floor leader, Hemmings won the Republican candidacy for the governor's race, then lost the general election. He hosted a conservative drive-time radio talk show in 1991 and 1992; in 2000 he was elected to the state senate.

In 1994, during his second run for governor, a campaign poster showed Hemmings leaning into a back-arch bottom turn, circa 1967, with the accompanying slogan: "Hemmings: He Doesn't Golf." Hemmings' family also made the news with some regularity. Younger brother Aka Hemmings was a renowned canoe paddler; daughter Kaui Hart Hemmings' critically-acclaimed debut novel, The Descendents, was made into a hit movie starring George Clooney.