As part of the WSL Heritage Series, we're sharing these stories with help from Matt Warshaw at the Encyclopedia of Surfing.

Enigmatic pro surfer from Santa Barbara, California; three-time world champion (1985, 1986, 1990), and incomparable wave-riding stylist; one of the sport's most revered and influential figures. "His world titles brought salvation and inspiration back to American surfing," surf journalist Chris Mauro wrote, "but it was Curren's humility, his shunning of the hype, and of course his ungodly natural talent that had the most influence." Curren was born (1964) in Newport Beach, California, the son of pioneering big-wave surfer and board maker Pat Curren, and raised in Santa Barbara.

Pat first put Tom on a surfboard at age two, but Curren didn't start surfing regularly until age six; at 14 he began a remarkable four-year streak as an amateur competitor, winning the United States Surfing Championships in 1978 and 1979, and the juniors title in 1980; he also won the juniors title of the 1980 World Championships, and followed up two years later with a victory in the men's division.

In 1981 he finished runner-up to former world pro champion Shaun Tomson in the Katin Pro-Am, then won the following year. 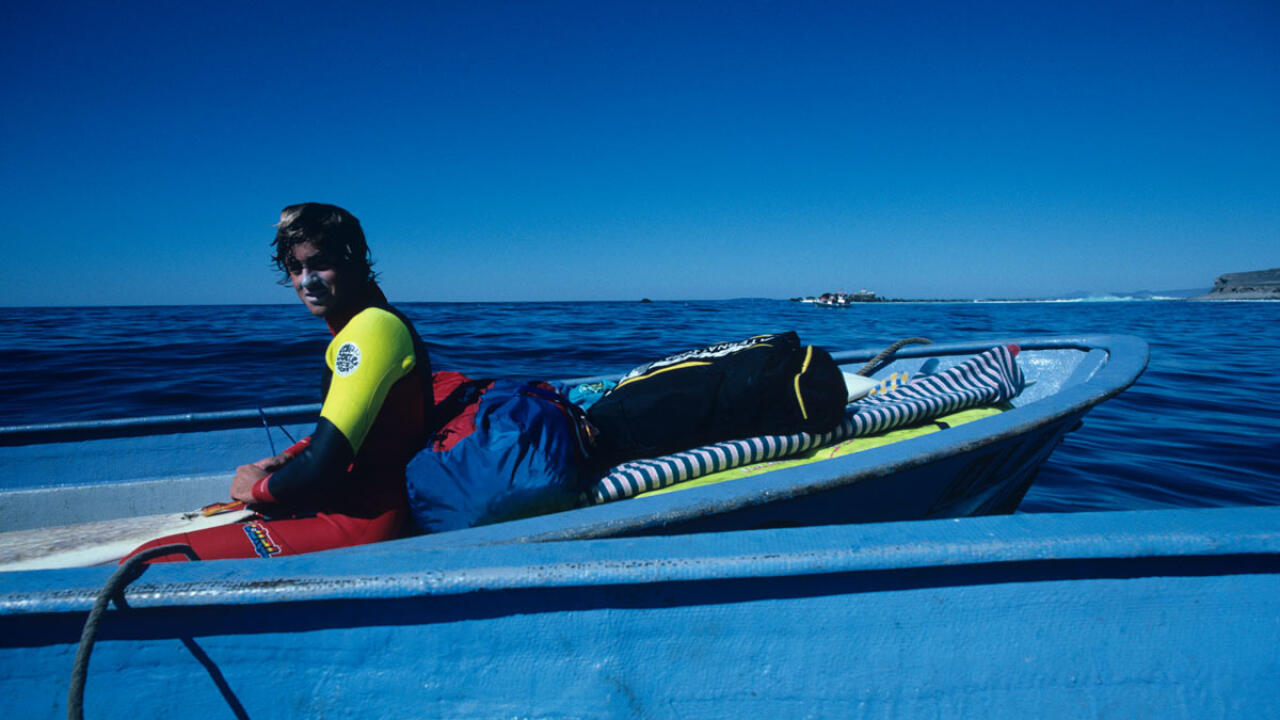 Curren turned pro just before his 18th birthday and signed contracts with Rip Curl wetsuits and Ocean Pacific beachwear worth $40,000 a year-a record at the time for a first-year pro. Curren won the Trestles-hosted Stubbies Pro, his debut event; entering just four of 12 world tour events in 1982 (including the Marui Pro in Japan, which he won) Curren finished the year rated #19.

His rating jumped from eighth to fourth over the next two years, helped by consecutive wins in the Op Pro at Huntington Beach.

By mid-decade, the handsome and reclusive teenager was an international surfing phenomenon. Apart from his contest record, Curren developed an original wave-riding style-influenced in part by 1978 world champion Wayne Bartholomew-that was both functional and poetic. Using Al Merrick-shaped tri-fin surfboards, and with a style born in part from endless hours spent in the long perfect waves at Rincon, Curren planted his front foot at a 90-degree angle upon standing up, tucked his back knee in, and rarely moved his feet as he rode. The lines he drew across the wave face were alternately sinuous and explosive, each turn blending perfectly into the next.

Although relatively slender at 5' 8", 150 pounds, Curren was able to synchronize his limbs, head, and torso so as to leverage maneuvers with a deceptive power. He invented the "double-pump" bottom turn by adding a quick booster second turn while climbing toward the lip, resulting in greater torque and rotation during the following off-the-top maneuver. Curren's style became the pattern for virtually every hot young surfer in the world during the 1980s and early '90s.

Curren's first two world titles seemed predestined. He won five of the season's 21 events in 1985, and took the championship by defeating rival Mark Occhilupo of Australia in the semifinals of the Rip Curl Pro at Bells Beach-still regarded as one of the great matches in world tour history. He was the first American male surfer to win a world tour title since the circuit had been founded in 1976. The following year Curren, 21, won five of the first 10 events, faltered over the last eight contests, but held on to win a second title.

By that time he'd been canonized by the surf press, and was featured in virtually every contemporary surf movie.

Details of Curren's personal life-that he was drinking premixed cocktails in sixth grade and getting stoned in seventh grade; that his always-distant father had left home for good when Curren was 17, by which time his mother was a devout and proselytizing born-again Christian; that the 18-year-old Curren had in 1983 married a French teenager-were revealed in a lengthy Sports Illustrated profile. Curren himself, while exquisitely uncomfortable in the spotlight, mumbling his way through interviews and awards presentations, proved to be both intelligent and self-deprecating, and eager to deflate the Curren-mania. "There's a lot more to life than winning a championship," he told surf journalist Matt George in early 1986. "All it signifies is who's best at getting four waves to the beach, and when you look at it in that form, it's really insignificant."

Curren seemed to lose interest in competing in 1987 and 1988, dropping from fifth to 15th in the ratings, then virtually quit the tour altogether in 1989, choosing instead to spend time with his wife and two young children in Anglet, his newly adopted coastal hometown in southwest France. Returning to competition in 1990, the 26-year-old won a record-tying seven events for the season and cruised to his third and final world title. He won his final world tour event at the end of 1991, at Haleiwa, on the North Shore.

It was never determined if Curren was displaying his chronic absentmindedness or making a quiet but effective anticorporate statement by riding to victory at Haleiwa on a board conspicuously free of logos and trademarks; longtime sponsor Ocean Pacific, however, was angry enough to drop Curren from its roster.

A few weeks later Curren signed the richest contract in surfing at the time: a five-year, $2 million deal with Rip Curl. He then spent much of the early and mid-'90s traveling the world as the star of Rip Curl's "The Search" marketing campaign.

Curren and his first wife divorced in 1993; the following year he married Makeira Caicedo of Panama, returned to Santa Barbara, and by 1996 had fathered two more children. He remained as enigmatic as ever, riding strange homemade surfboards, appearing on MTV's Alternative Nation in 1995 to promote the Ocean Aid environmental group, and telling 40,000 people at a religious rally in Anaheim Stadium that "the ocean is a sign of God's power, [and] it's really good to live for Jesus Christ." He made two or three halfhearted returns to competition, but never again traveled on the world tour.

Curren occasionally competed in masters events during the 2000s (he finished second in the 2000 Quiksilver Masters World Championships and first in the 2011 ISA World Masters), and continued to shine in sponsor-funded photo trips. His daughter Lee-Ann qualified for the women's pro tour in 2010, and Curren shepherded his sons Frank and Pat into pro surfer careers and endorsement deals with Rip Curl.

Filmmaker Sonny Miller's Search For Tom Curren documentary won Surfer magazine's Video of the Year Award in 1997; Follow the Leader, another Curren documentary, was released in 1998. Curren was featured in Biographies, a 2001 cable TV series produced by Opper Films. Curren was inducted into the Huntington Beach Surfing Walk of Fame in 1995, and won the Surfer Magazine Readers Poll award for eight straight years, from 1985 to 1992. Surfing magazine named Curren the "Surfer of the Decade" for the 1980s, and counted him among the "Top 16 Surfers of All Time" in 2004. Surfer ranked him third on their 2009 list of the "50 Greatest Surfers of All Time."

A musician for almost as long as he's been a surfer, Curren released his first album Tom Curren in 2004. His 2013 LP In Plain View earned a three-star review in Rolling Stone. "Turns out the longtime drummer and guitarist can navigate a studio as well as a wave," the magazine noted.

Tom's younger brother Joe Curren (born 1973), also a talented, stylish regularfoot, had a brief pro surfing career in the 1990s and 2000s, then moved into photography.