Johnny Cabianca grew up surfing in Maresias, Brazil with Gabriel Medina's stepfather and coach Charlie Rodrigues and has been shaping Gabby's boards since he was 14. Cabianca moved to the Basque Country in 2003, and after working for local surfboard manufacturer Pukas for ten years opened his own factory three years ago.

Both his shaping, and his local knowledge, has been instrumental in Gabriel's incredible success in the Quik Pro France. The WSL caught up with Cabianca in his Zarautz factory to get the inside word on Medina's new quiver of secret weapons.

How many boards have you shaped for Gabriel for the Quik Pro France.
I make 10 boards for Gabriel for each CT event. There's no contract or sponsorship, it's just a handshake deal between me, him and his family. Our relationship is based on years of friendship and respect and it has worked until now. 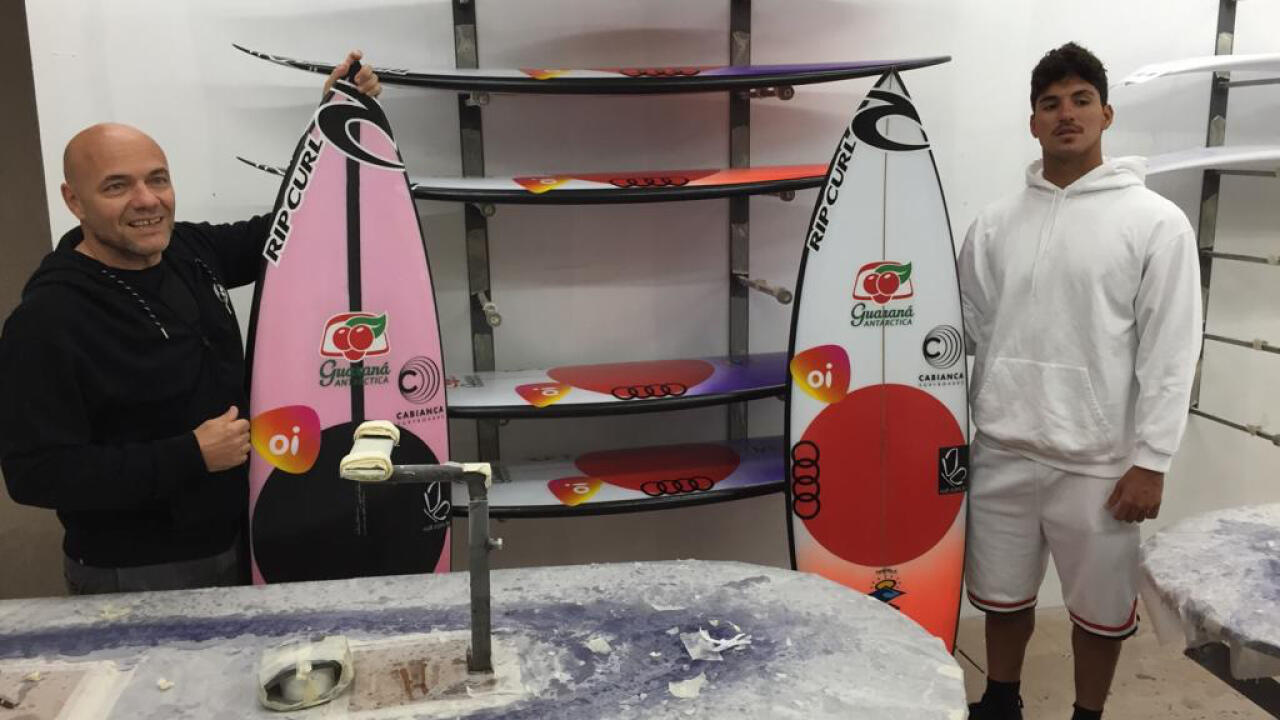 What are the current dimensions of Gabriel's boards?
Since 2011, when he qualified for the CT, we've had the same two models with two different rockers. There's the dFK, or the da Freak Kid, which has a bit more rocker, more concave and is a bit longer. That model is usually 28.3 to 28.6 litres in volume and is 5'11 by 19 x 2 7/16.

However, for the beachbreaks, and especially here in Hossegor, he likes the Medina model. It is has less rocker so is flatter and has more volume. Yesterday he rode a 5'10 by 19 x 2 3/8 with a volume of 29.2 litres.

What about the look or the sprays, who decides that?
Gabby is all over that. At the moment he loves bright colors and is mad about having a big circle on his front foot. You might need to get use to seeing that in Europe over the next month.

Medina Pushing Limits In France
7:02
The Brazilian flies straight toward his fifth Finals appearance in the Quiksilver Pro in France.

How is he with the technical feedback on his equipment?
It's a real team effort. Gabriel is quite reserved and so won't say a whole lot after a surf. Then Charlie will analyze the performance, have a chat with Gabe and then pass on the information back to me. And I'll tell ya, Charlie is pretty quick on the old WhatsApp!

However as Gaby gets older he is getting way more technical. He also really knows the volumes and shapes he likes. More and more just by looking and feeling the boards he can give me pretty good insight. It also helps we are just making the most subtle of changes. It's a continual process of refinement that's been going on for a decade.

How much benefit is it for Gabriel to have a shaper based in Europe who knows the conditions so well? Not many of his competitors have shapers who live over here.
Look, I think it helps, but maybe a bigger factor is that we all grew up in Maresias. The waves there are very similar to here in Hossegor. The movement of the water around the banks and the power of the waves is just like what Gabriel grew up in.

It's no surprise that Gabriel has had his best results in Europe and France, as myself and Charlie and him all have that knowledge base.

He's recently picked up his quiver and you've been watching him freesurf, what's your take on his current form?
To me he looks so dangerous. It's no secret, anyone who has been watching him surf knows he is getting better and better. As his shaper I'm just trying to follow his progression with my own work. He doesn't have any limits.

Along with Filipe and Italo I feel he is leading the charge in changing what is possible on a surfboard. I'm just hanging on for the ride. We'll just have to see where he takes us all.