At the end of 2017, after her maiden Qualifying Series campaign, New South Wales, Australia's Macy Callaghan found herself just outside the cut line for qualification, a heart-wrenching way to end the year.

While that meant she had to go back to the grind of another year on the QS, all was not lost: Callaghan got the call-up as an injury replacement wildcard at nearly every Championship Tour event, and even made a Final in France.

Heading into the last event on the 2018 QS schedule Callaghan was sitting in 14th place. A longshot. It was either make the Final or go back to the QS for year another. "Heading into that final day was tough," said Callaghan. "But I didn't want to end up in the same situation as last year, so I just pushed through it, I guess." 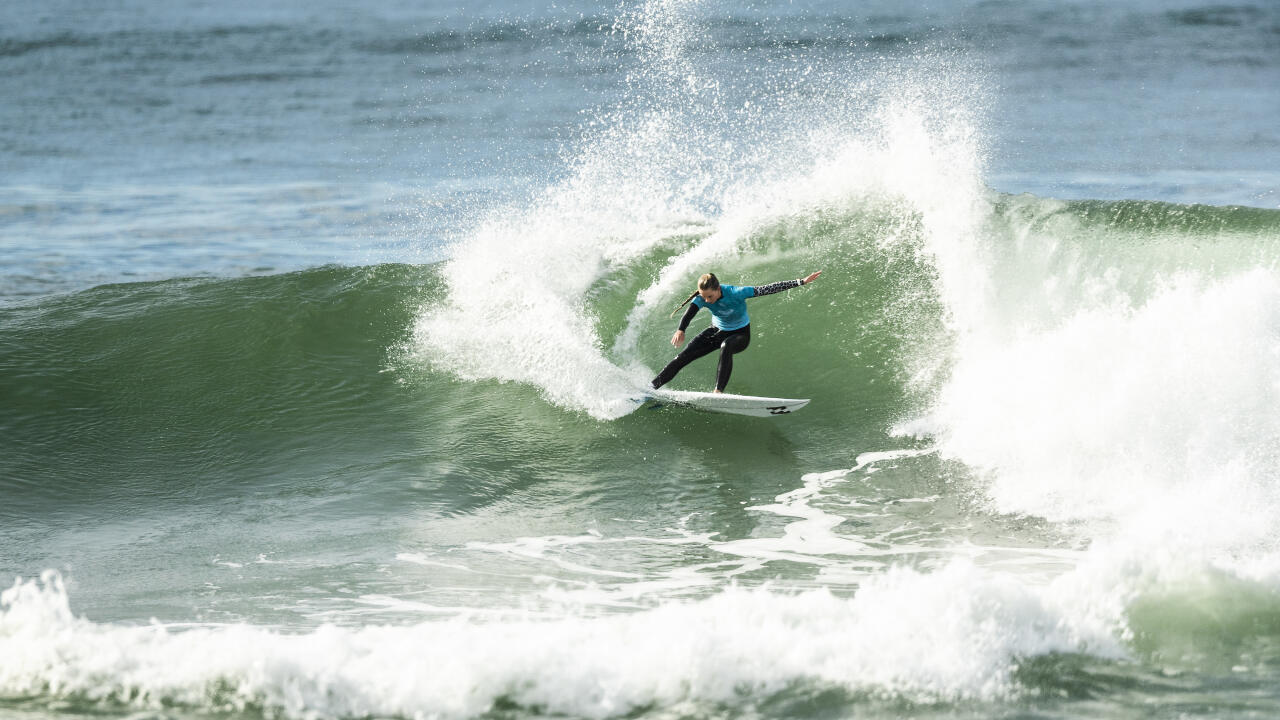 From first one out to last one in. What a difference a year makes.

Talk us through the moment you found out you'd officially clinched a spot on the Championship Tour.
Well, coming into the last event at Birubi [The Port Stephens Toyota Pro QS 6,000], I was such a longshot, I think I was sitting at 14th place. I knew I basically had to make the Finals to make the Tour, so I had a big task ahead of me.

And then you came second, so you did exactly what you needed to.
Yeah! [laughs]. Last year I missed out by one spot, which was tough. But I had so many opportunities on Tour this year due to getting the injury wildcard that it was a good little run. I feel like I was able to get my bearings and meet a bunch of new people and surf in some of the events without feeling the pressure of having to do well in them. Now I feel way more comfortable. I feel like I'm ready. You're technically a rookie, but you're also kind of not.
Seriously. It's super weird but I think it was a blessing in disguise. I had a couple shockers on the CT and I'd come out of them thinking I'm lucky I'm not actually on Tour yet. It was a good warmup. Now I think I'm definitely more prepared.

How did it feel going into Birubi knowing you had to make the Final to make the Tour?
I was actually feeling surprisingly comfortable in that event. I had a small little group around me, as well as my Mom and my coach, and we just kept things simple and casual. I really didn't think about it too much, so I didn't feel the pressure. Being a semi-local there was definitely more media attention around me, so that was hard to ignore.

The day before I made the Quarters it got a bit tough: It was hard to sleep and I was definitely thinking more about what I needed to do. But when it came time to surf in my heat I just sort of put that all way and pushed through it.

With Caroline Marks qualifying last year, and now you and Brisa Hennessy making it on this year, there is a lot of new young talent on tour. It'll be fun watching you all compete against the veterans.
Yeah, really cool. Caroline and I are good friends and she is an amazing, incredible surfer. It's cool to get to surf with her now, and to battle it out with Brisa for Rookie of the Year this year, which is definitely a goal of mine. There is a new generation coming up, and I while I don't think the older girls are scared yet [laughs], they are realizing there is a lot of new talent to worry about. Who will you travel with this year?
I'll bring my Mom to a few events. I haven't really planned that out. I have a couple of friends I want to bring along, as well as a coach, so I'll figure that all out soon. I traveled with Sage Erickson last year, but unfortunately she's not on tour this year, though I'm hoping she'll get the call up for a couple of injury replacements.

Who are you working with at the moment?
Well, at home, I'm working with Mick Cain. I also worked with Richard Marsh last year. I haven't finalized who I'll be working with this year, but I do plan to have a coach with me on the CT.

Which event are you most looking forward to?
I'm very excited for the first event. I live 10 minutes down the road, so it's exciting to have all my friends and family there. But there are so many others. I'm excited for Bali, and South Africa is pretty amazing as well. Round 2 at this year's Margaret River Pro. - WSL / Matt Dunbar

Is there anything you're nervous about?
I definitely want to re-qualify through the CT, so there's a bit of pressure there. But I am still gonna do the QS as a back up. I guess the thing that makes me the most nervous is just being away from home for that long - just being on the road for months, doing two tours.

Having just turned 18, you qualified young. Have you considered the fact this tour could be your life for the next 10 plus years? How do you feel about spending all of that time on the road?
It's crazy. Caroline is even younger. We're just supergroms on tour running amuck [laughs]. But there are so many great people working for the WSL and watching out for us and they are all so helpful. They make us feel at home.

Of all the waves on Tour, which one haven't you surfed?
I've never been to Rio, so that will be a first. That's the only one, I think. Who is your favorite male and female surfer on Tour?
Steph Gilmore is my favorite female. I have a huge girl crush [laughs]. Lucky enough I get to spend time with her close to home. Of the guys, I just don't think you can beat John John. He's too amazing.

Have you thought about how cool it is that you'll also get to surf at least one full year alongside Slater at all the CT events?
Yeah, that's so crazy! I never could have imagined. I'm stoked he hasn't retired yet and I get to have a year with him still there. That will be pretty special.