No two events on the Qualifying Series are harder to predict than the last two on the schedule: Haleiwa and Sunset. Conditions can land in the two feet range or 20. You can win in the air on a shortboard, or in the tube on a 8'0 gun. 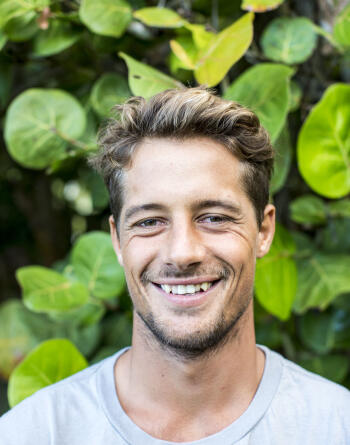 Heading into Hawaii on the outside of qualification looking in is not where any QS surfer ever wants to be. More often than not, that's also where they stay.

Not Soli Bailey. Not this year.

The 23-year-old entered November sitting in 17th place, needing a pair of big results to qualify, after having not made a Quarterfinal all year. With the odds stacked well and truly against him, he went out and finished in the Quarters at pumping Haleiwa and then in the Semis at maxing Sunset Beach, jumping six places and booking a spot on Tour in the process.

Talk us through that final event at Sunset, and your mindset going into it.
It was pretty wild. The whole finish. Obviously it's super high stress for everyone, and a little more so for the people right on the edge [of qualifying], like where I was.

Before this year, I actually hadn't done great at Haleiwa or Sunset, and I don't know why. Part of it was I hadn't ever really gotten my boards right, and this year I felt really great about them going in. But there were some nerves for sure. Even though I was disappointed losing in the Quarters [at Haleiwa] - because with a couple more heats I could have done it [qualified] there - I walked away feeling good about the event and the result, even though I was left just on the outside looking in, at 11th going into Sunset.

Heading into that final event I was just thinking there was no way I was letting it slide this year. It was just pure determination. I felt good going in. I was cool and collected and tried not to ever get too far ahead of myself mentally. I had the confidence to know I could do what I needed to do and my boards were feeling really good, so that was also a big part of it.

It must've been a huge relief.
It was crazy. It didn't really sink in all at once. But it was a wild day because after I had lost in the Semis, if Wesley [Dantas] would have won the event he would have taken my spot, so there were other moving parts. But when it did become official it just felt like a huge relief more than anything. Just a dream come true. How many years did you do the Qualifying series?
That was my fourth year on the QS. It's a bumpy road, that's for sure.

Can you pinpoint a turning point this year?
When I look back at it, South Africa was a turning point, for sure. I got a good result over there [at Ballito], and a lot of that was traveling with Jack [Freestone] and Tommy Whits. We were just having heaps of fun and doing mock heats together and we both just stared flowing through the event. I got a round before Quarters there and Jack made the Final. We were both really stoked leaving Africa and I think that was where the momentum sorta switched in our favor.

It was funny, I never actually made a Quarterfinal until Hawaii. I kept making the round before the Quarters, and I was seriously wondering if I was ever going to break out of that round. Even though it's a result there is a big point difference between the round before Quarters and a Quarterfinal. But I guess if I was gonna pick a couple of events to break past that Round of 16, Haleiwa and Sunset are the ones.

It's cool that you and Jack both qualified together this year. Any plans to do some of the CT events together?
We haven't really planned that all out yet. I'm definitely gonna keep the vibe flowing with Tom [Whittaker], but I can imagine we'll at least do a couple of the events together. It was just good dynamics. Good banter. Plus Jack is so talented - it's always good to get a lot of surfing in with him.

Was this your first year working with Tom?
Yeah. That was our first year all together. He [Tom] kinda approached us and it's cool that in our first year we were able to put it together and both qualify. It's actually pretty rare. Usually it takes a couple years to work on everything and for everything to click.

I've noticed a lot of surfers break through once they commit to a coach.
Yeah, definitely. That was a huge part of me qualifying. It kind of forces you to 100 percent commit once you invest back into yourself like that. It's kinda like, you might have all the knowledge, you might know what you need to do, but having someone there is sometimes all you need. Someone that'll let you know your board does look good. Or reaffirms you are good enough to win this heat, no matter who it's against. Tom spent a lot of time on Tour, so I'm super stoked to have him on my side. You've won an event already at Pipe [The Volcom Pipe Pro QS], but what other wave are you really looking forward to surfing?
Man, the whole year is exciting. I've always dreamed of getting the start at Snapper. Bells is also a really special place for me - I won an Indigenous title there, with my Indigenous background, and I also had a few really good junior results out there. And then Teahupo'o and J-Bay. Those are the events I'm most looking forward to. But the whole year is generally always pumping and it'll be really cool just to get all of those opportunities. I can't wait.