Peru's wave-rich coastline lived up to expectations once again as sets in the 6-foot range continued to pulse down the lefthand pointbreak at Señoritas in Punta Hermosa on Day 4 of the WSL QS 3,000 Claro Open Pro - Copa Tubos. Action was non-stop in front of an enthusiastic crowd on another marathon day of 20 heats. With completion of Round 6, the Quarterfinalists have been determined and an inaugural event winner will be crowned tomorrow. 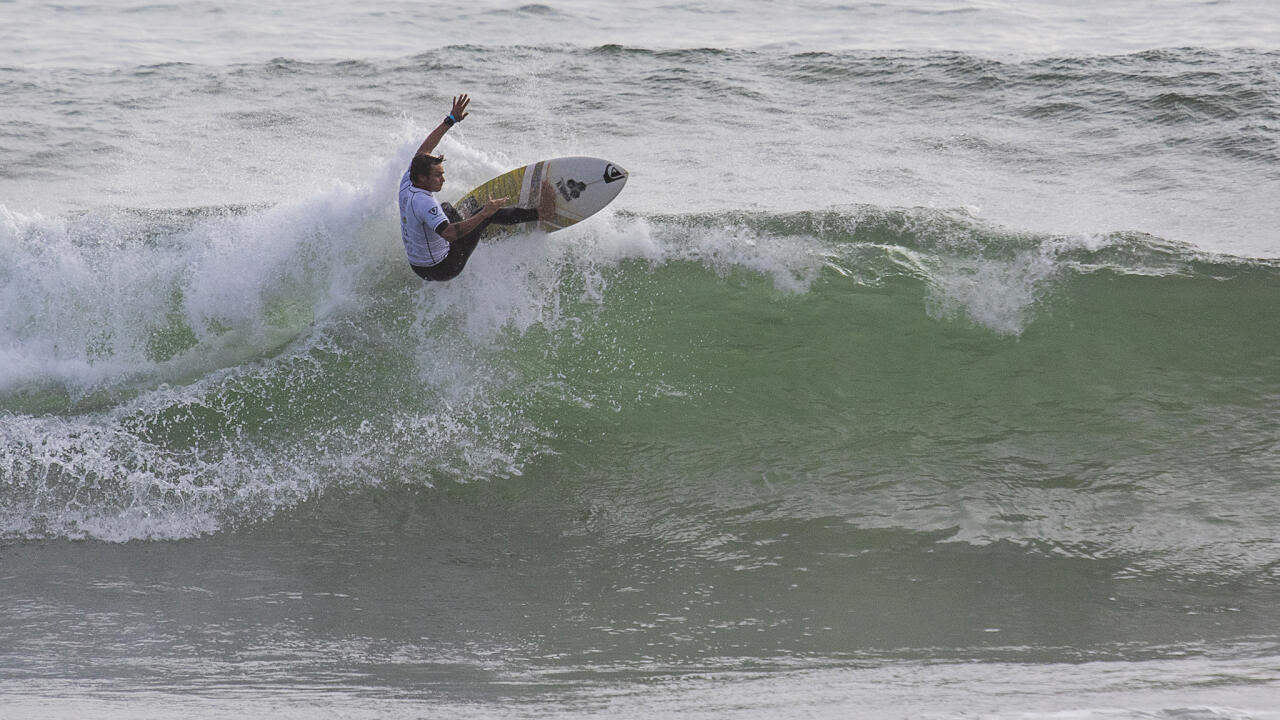 There were some big airs thrown, as well as a large portion of powerful carves throughout the day, but the surfer who seemed the most in sync with the lengthy waves at Señoritas was Marc Lacomare (FRA). The Frenchman has stormed his way through round after round, culminating in his 16.60 total in Heat 3 of Round 6 which included a near-perfect 9.43 for the highest scores of the event.

"I'm super happy, but I'm exhausted (laughs). I surfed a lot of heats today and I was really tired in that last one, but I was just in perfect rhythm. It always feels extra good to surf in real waves during a contest, it's amazing. I feel like I know what I'm supposed to do on a wave, I'm not rushing anything and I think this wave suits my style," Lacomare said. After grinding it out on the QS for over a decade, the powerful goofy-footer felt like some time away from contests would be beneficial.

"Last year I ended up taking some time away from competing. Honestly, I just felt burned out. I was going to these far-off places to surf in small waves and losing in my first heat, then going halfway around the world to have the similar result at a different contest…it just seemed like the same situation kept repeating itself. But now that I'm back, I feel completely refreshed and even though I don't have such a good seed anymore, I still feel like my surfing is at a high level and now my goal is to make it into the year-end QS 10,000s," added Lacomare.

Earlier in the day, the first surfer that guaranteed his spot in the Quarterfinals was Alex Ribeiro (BRA), who continued to show off his razor-sharp forehand surfing at the Claro Open. Advancing in 2nd was his fellow countryman Heitor Alves (BRA), who at the age of 35 is looking as spry as ever. "It feels great to be here at this event. I feel confident, my board feels good and the waves here at Señoritas are incredible," claimed Ribeiro. "I just hope that I'm lucky enough to find the best waves because my goal is to win the contest here. I won the QS 6,000 in Australia and I want to keep that winning rhythm going. I might not have come to this contest if it were anywhere else, but since it's close to home and the waves in Peru are incredible, I couldn't miss this opportunity," concluded Ribeiro. A win in Punta Hermosa would lift Ribeiro into 2nd place on the Qualifying Series (QS) rankings.

Following Ribeiro's victory, Heat 2 of Round 6 saw Gatien Delahaye (FRA) display his formidable backhand surfing to win with a 13.73 total. The lone Peruvian surfer left in the competition, Carlo Mario Zapata (PER) was able to advance in 2nd, eliminating local surfer Ricardo Cruzado (PER) and Krystian Kymerson (BRA). Being the last Peruvian in contention for the inaugural Claro Open Pro - Copa Tubos title, the fans were on their feet as Zapata reached the sand.

"I feel amazing right now and my adrenaline feels like it's going to explode," Zapata said. "I feel confident in my surfing, but having the support from the crowd makes this even more special. I haven't been in a QS contest since 2013, but I might have to get back on the tour after this (laughs). I've just been trying to get an early start to my heats and not being too patient. So far, it's been working out." Finishing off the list of athletes that advanced into the Quarterfinals were former Championship Tour (CT) surfer Ian Gouveia (BRA) and the always-upbeat Costa Rican, Carlos Muñoz. They were able to defeat Samuel Pupo (BRA) and Luan Wood (BRA), both in-form surfers during this week.

A call is set for 9:00 am local time Sunday morning. Heat 1 of the Quarterfinals will see Alex Ribeiro face up against Carlo Mario Zapata.