Six years ago when Melati and Isabel Wijsen, visionary founders of the international environmental youth movement, Bye Bye Plastic Bags, were just twelve and ten years old, they had a lesson in school about some of the world's greatest change makers.

The duo learned about activists like Nelson Mandela, Martin Luther King Jr and Mahatma Gandhi, who put their lives on the line for freedom and justice.

As they walked home that afternoon, they discussed how they might contribute to making their home island of Bali a better place.

The Wijsen sisters grew up near the beach, among the jade rice fields of South Bali, on an island studded with Hindu temples, crowned with active volcanoes, threaded with rivers and fringed with wide beaches that get thrashed by world class surf. The island's beauty powers the beating heart of Indonesia's multi-billion dollar tourist industry, but despite its captivating natural and cultural attractions, Bali's plastic pollution problem is hard to ignore.

Wherever the sisters went, they saw plastic trash. And as they continued to brainstorm about a problem they could take on together, the more the conversation returned to plastics.

It was in the rivers they bathed in, tangled in the canals that feed the rice crop, and whenever they went swimming at the beach, they felt plastic bags wrap around their arms and legs.

That afternoon they did a little digging and learned about plastic bag bans in Oakland and Dublin, Hawaii and Rwanda and thought, why not Bali?

According to the Wijsen sisters, Bali produces roughly 680 cubic meters of plastic garbage everyday. A percentage of that waste lands in recycling centers.

Most of the plastic is hauled to the island's main landfill in the Serangan mangroves, one of the few places on Bali where visitors are not welcome.

I know this because I've been kicked out of the landfill, which happens to be located just a few hundred meters downstream from an eco-tourism destination where guests stroll boardwalks through the mangrove forest.

Mangroves and estuaries are nature's water filter. When intact, they help clean nutrients and silt from brackish rivers and lagoons before they spill into the ocean, which protects coral reefs and other marine ecosystems. When they're clogged or buried with trash they obviously can't function nearly as well.

Of course, plastic bags (and straws and packaging) don't always end up in the recycling center or landfill in any country, and especially not in Bali because of lingering, once innocuous, habits.

"When I was a kid, all our snacks were wrapped in banana leaf," said Indonesian surf star, Rizal Tanjung. That "packaging" which was chiefly used by street food vendors or warung (cafe) owners, could be tossed anywhere to biodegrade.

In the 1990s banana leaves were replaced by thin plastic bags, and instead of coconut shell forks and spoons, there were plastic utensils. "Now you see people still throw the plastic like it's a banana leaf," Tanjung says.

Bali is one of 17,000 islands in the Indonesian archipelago, which is home to over 260,000,000 people. It's the fourth largest country by population on earth. According to a 2017 study published in Nature, its rivers have the second highest concentration of plastics after China.

Much of this is due to the local use of plastic, but is also partially caused by plastic being shipped in from western countries with the intent of being recycled (often times the amount of plastics shipped in overloads the island's recycling infrastructure).

The more the Wijsen sisters read about the problem, the more determined they became, and they gathered a group of friends from school to help. They met at school during lunch, and sprawled on the sofas at the Wijsen family home after school. That's where Bye Bye Plastic Bags was born.

"At our core, we are about education," Melati Wijsen said. "Our first step was to speak at local conferences and the students who saw us on stage started to join us. We hosted educational workshops and started an online petition."

They posted the petition one afternoon, and by the following day they had over 6000 signatures. "That was the first moment we knew we were on to something and that there was no turning back." 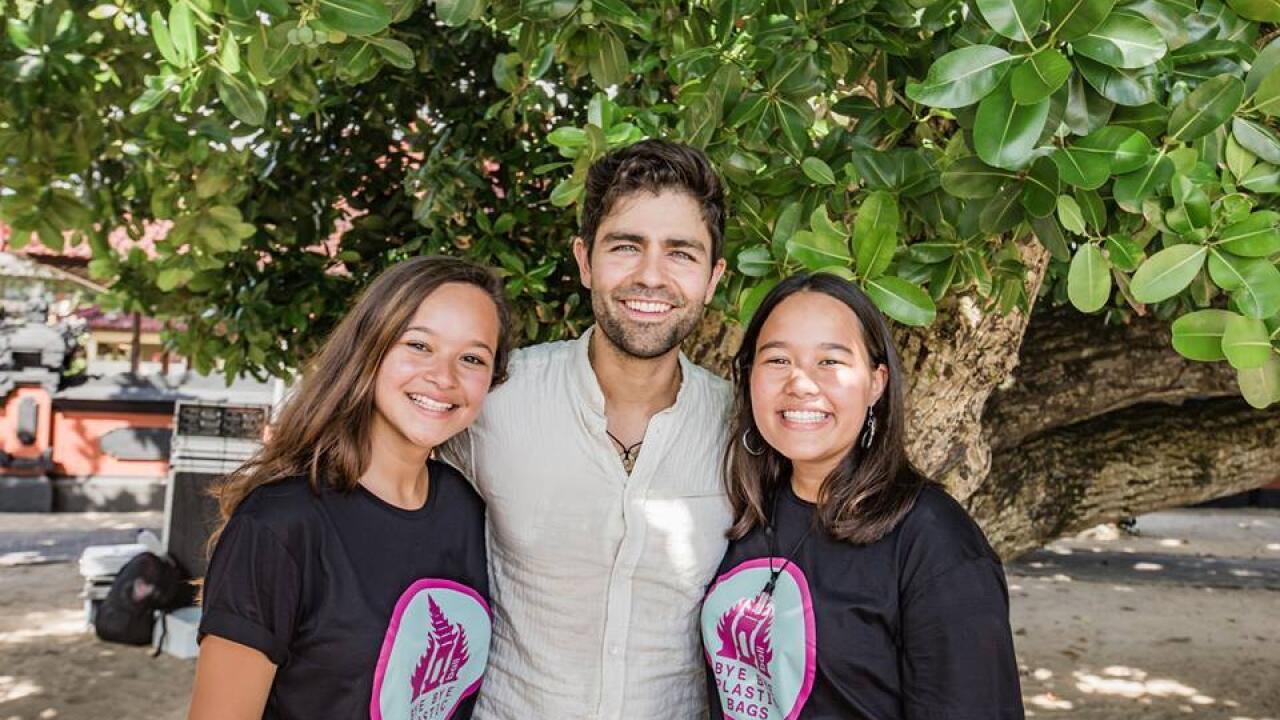 Though their profile grew fast-both within Indonesia and internationally, the Bali government didn't engage with them at first. So they stepped up the pressure. They sent emails, mailed letters and called the governor's office almost every day.

In 2014 they gave their first international talk in India, and afterward their parents took them to a Gandhi museum set in his old home. Isabel and Melati absorbed lessons of civil disobedience as they toured the exhibits silently and hatched a new plan to get the Bali governor's attention: a hunger strike.

"On the second day of the strike we were picked up from school and taken to the governor's office," Melati Wijsen said, "and we started the discussion to ban plastic bags."

It took several years and a new governor to finally pass the ban in 2018, but by then it was no longer just a ban on plastic bags but on straws and polystyrene too. Scheduled to go into effect this June, it was celebrated worldwide.

By then, a plastic bag ban had already been enacted in two cities in Indonesian Borneo, the first in 2016. In 2017 two Javanese brothers, Gary and Sam Bencheghib, built kayaks out of plastic water bottles and paddled 36 miles of the Citarum River, from the green hills of Bandung to the river mouth outside of the teeming metropolis of Jakarta, Indonesia's capital.

The Citarum is one of Indonesia's most polluted rivers. At times the river was so thick with plastic, they couldn't see the surface of the water, and the videos they shot inspired national outrage and shame. Even President Joko Widodo was not immune. After seeing the brothers' footage, he sent the military to the river to help clean it up.

"That's a great use of the military," deadpanned Marcus Eriksen, co-founder of 5 Gyres. Eriksen is an Iraq War veteran turned scientist and environmental activist who once sailed from Los Angeles to Hawaii on a boat he built from plastic water bottles to raise awareness of the Great Pacific Garbage Patch and the marine plastics problem.

Eriksen was one of the first to explain how plastics break down into confetti like pieces called microplastics, which are ingested by fish and marine birds, and toxify the food chain. When he started his work nearly twenty years ago, there were no plastic bag bans anywhere, but thanks to a new generation of activists, Indonesia was primed to solve their plastic problem.

This May, with weeks to go before the Bali ban was to take effect, a challenge was filed with Indonesia's Supreme Court by the Indonesian Plastic Recycling Association (ADUPI), which has placed the Bali ban in jeopardy. ADUPI are asking for a judicial review of a law that they argue will cripple the island's recycling business.

Municipal and state laws like the Bali ban have emerged as one of the most effective solutions to the plastic problem because they demand changes to manufacturing that ripple through the supply chain and can shift entire industries.

The recycling industry on Bali is rather new. Christine Halim, ADUPI's president, started a recycling center out of her garage 16 years ago. Today she owns multiple recycling centers, both on Bali and her native Java, and claims to employ 2000 workers. One of their revenue streams are plastic bags made from recycled plastic shampoo and cooking oil bottles. If the ban stands, her plant and others like it, will be impacted.

Melati Wijsen is quick to point out that the Bali ban does not effect high value materials like plastic bottles. "Straws, Styrofoam and bags are the least valuable materials," Wijsen says. Though, to be fair, it would prevent Halim from selling her bags on Bali.

"Banning will not solve the problem," Halim says, "I want Bali to review their waste management." 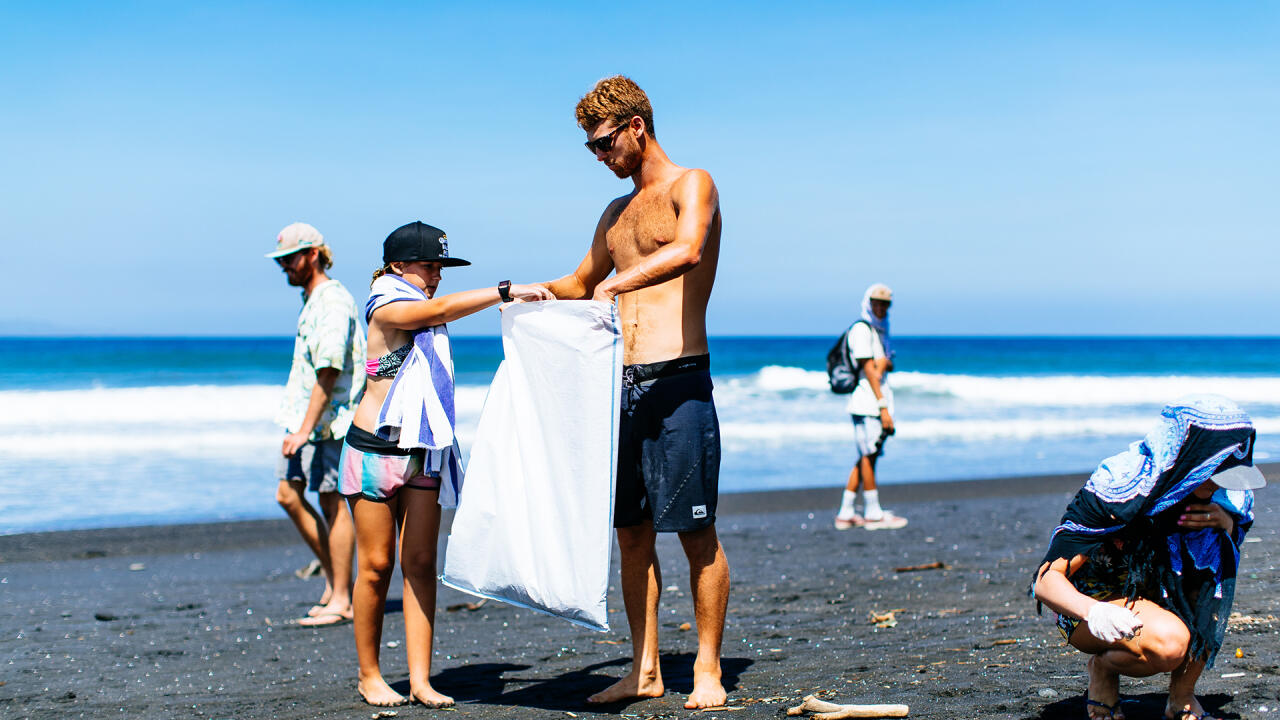 WSL athlete Jesse Mendes and others take a moment to clean up plastic pollution at Keramas beach in Bali. - WSL / Ed Sloane

ADUPI has also framed the ban as a human rights infringement in their filing because, Halim says, it could put the waste pickers Bali's recycling centers rely on (men and women who sort through dumps, like the Serangan landfill, looking for high value recyclables and earn a few dollars a day) out of work.

When he heard that, Eriksen pointed to the Philippines, another island nation with a major plastic problem that invented a new role for waste pickers. "There's an organization of waste pickers in Manila, called the Mother Earth Foundation," Eriksen says. "They have waste pickers go door to door to teach families how to sort their trash."

In the Manila model, waste pickers become educators that also collect waste and still get paid for the recyclables they haul. "They have a more dignified experience, it's cleaner and cities are finding it saves them a ton of money, thanks to fewer garbage truck routes," Eriksen says. That model is already being implemented in Bandung, Indonesia and there's no reason it couldn't be employed in Bali.

Halim would be all for a system like that. "We want everybody to know that there are recyclers in Indonesia, but the government doesn't give us any incentive or support. They don't care about us, and we want to be part of the waste management system here." Bali is famous for its picture perfect surf breaks such as Keramas. To preserve these breaks, keeping Bali plastic pollution free is a call to action for surfers worldwide. - WSL / Damea Dorsey

ADUPI's eleventh hour challenge was about visibility more than a desire to sink the ban entirely, Halim says. And though it surprised many that this latest challenge came from recyclers, the fact that there was at least some late game pushback on Bali's ban wasn't a total shocker.

"It's money we're talking about here," Melati Wijsen says. "Plastic is a $4.3 billion industry in Indonesia and laws can get struck down."

Which is why Bye Bye Plastic Bags, an organization that has mushroomed from a small grassroots movement on Bali six years ago, into an international organization with 40 campaign offices worldwide, are still organizing and getting petitions signed to keep the pressure on Bali's decision makers until the ban finally goes into effect.

"We're up to 162,000 signatures already," Melati Wijsen says, "so we're pretty confident we can convince the government that this ban is worth fighting for."

Adam Skolnick is an author and award-winning journalist based in Southern California.