The blazing heat of Playa Revolcadero matched that of the Vans Surf Open Acapulco QS 1,000 presented by Corona's tempo on opening day with Rounds 1, 2, and 3 in the rear view mirror. If competitors didn't come equipped with an air game or strong rail surfing then today would've been a let for most as those who soared landed themselves into Round 4 where just 16 remain.

The swell began to show pulses of what could come starting tomorrow despite the tricky afternoon winds and surfers had to stay on their toes with wave selection proving a key factor. With a few implications on the line for a possible new North America No. 1 heading out of Acapulco, the weekend will prove critical. The Costa Rican stole the show with a near-perfect 9.17 (out of a possible 10) after soaring through an air-reverse in Round 2 Heat 6. But, the Costa Rican wasn't done yet and displayed his ability to also launch on his backhand for another near-perfect 9.00 in Round 3 to seal up a brilliant start to competition. The 25-year-old has his goals set for the rest of 2019 and could make them a reality with more performances such as today's.

"It's been four years since I've been back to Acapulco and to be here again feels great," Fillingim said. "I've been hanging out with all the Mexican surfers and they're like my brothers so it makes it feel like home I think. I went for an air in that Round 3 heat just before my 9 and fell so I had to tell myself that I had it. I'm just trying to get points and move up into a spot that gets me in the QS 6,000s but also prepare for the Pan Am games later this month so this is a great warm up for that as well." Upsets began early and frequent starting in Round 3 after Matheus Navarro helped eliminate an in-form Crosby Colapinto after the Brasilian already took a win in Round 2. Mexican contender Dylan Southworth sealed Colapinto's elimination, but it was Navarro who took over both of his heats in today's affairs. Navarro's return to the QS after a brief hiatus due to a lack of sponsorship has been nothing short of prominent with two wins, in Florida and Argentina, already to name but knows the work to achieve his dream is far from done.

"I'm really happy to make it through two heats and to be back here in Acapulco," Navarro said. "I competed here in its first few years of running and I love it here. Between the hotel we stay in to the waves it's amazing and the beach break reminds me of home which gives me a sense of comfort. With my two wins this year it's helped put me in a good place for getting a seed into the QS 10,000s and I wanted to make sure I kept that spot by coming here. I've seen there's supposed to some more swell coming tomorrow so I'm excited for that." 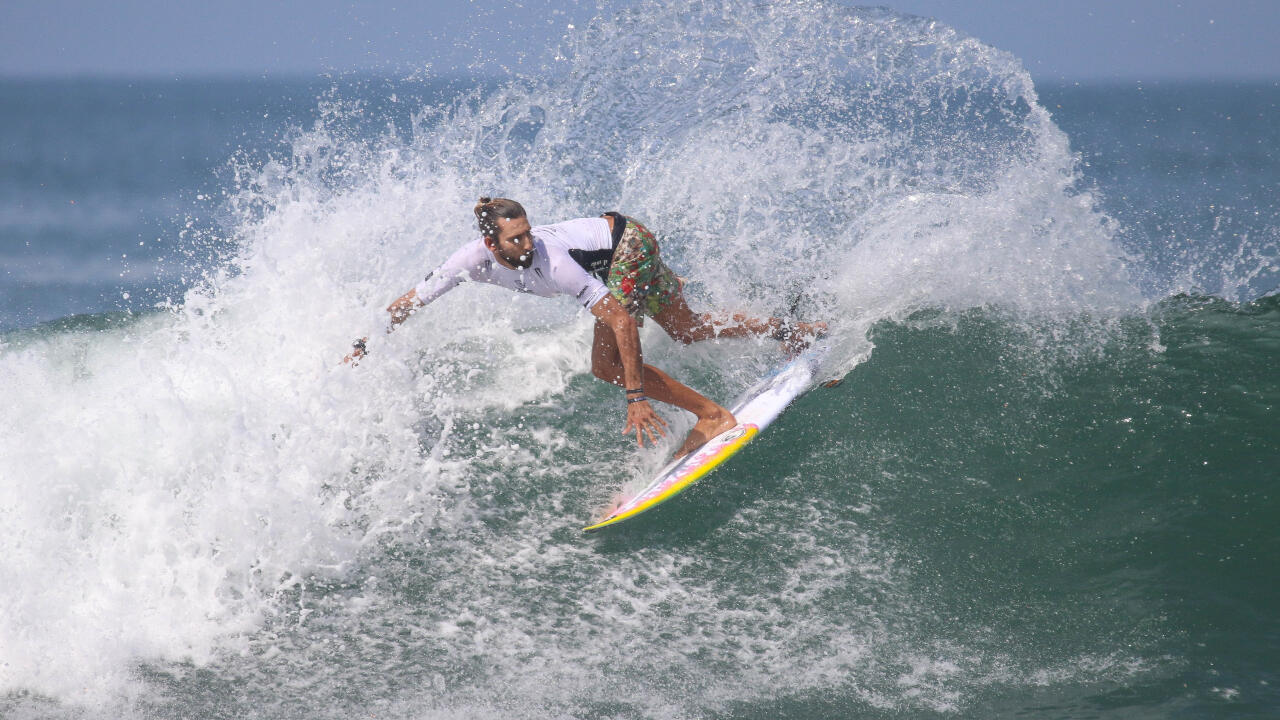 Southworth's clutch backhand surfing kept him in the mix in a stacked Round 3 heat after already dealing with Jhony Corzo and his brother Travis in Round 2. - WSL / Andrew Nichols

Current North America No. 1 Noah Schweizer put on the first dominant display with a 15.83 (out of a possible 20) heat total a strong forehand aerial performance and powerful attack but couldn't find his rhythm in Round 3 and added his name to list of upsets that include Mexico's top-ranked competitor Jhony Corzo, former North America Regional Winner Kilian Garland, Dylan Hord, Nick Marshall and Hawaii's Cody Young.

Mexican Hopes Hang By A Thread There were mixed emotions on the beach for Mexican surfers with many of their key competitors making their way into Round 4 but the loss of Corzo, former event Quarterfinalist Jafet Ramos, one of the top-seeded surfers Oscar Perez, Sasha Donnanno, Martin Olea, and Angelo Lozano were heavy blows. But, one of the country's upcoming athletes Alan Cleland was able to pull a heat together in the final stages of his Round 3 battle and take a win with his near-excellent 7.67. The 17-year-old joins Southworth and Adrian Rodriguez as the last three remaining Mexicans vying for this year's victory.

"I didn't' get a good wave until the last ten minutes I felt like so I'm just psyched to get through," Cleland said. "This is probably the most focused I've been for an event just being the only QS in Mexico and I always love surfing here. When you see the swell building up like it is, it gets the butterflies going knowing that there could be some good barrels out here and hopefully I can get far into this one."

Santa Cruz Well-Represented In the Round of 16 Sam Coffey led the way for Santa Cruz natives with an explosive finish to his heat. - WSL / Andrew Nichols

Round 3 victories from brothers Sam and Ben Coffey, and John Mel, as well as an advancing spot for Shaun Burns, will see all four Santa Cruz natives into Round 4. Mel remains the lone contender who can dismantle Schweizer from the No. 1 spot to takeover a place in the Vans US Open of Surfing trials and did so with a heat win in the dying seconds. The younger of the Coffey brothers, Sam, went toe-to-toe with Burns in their match-up but a last-ditch effort catapulted him into the lead and on track for his best result of 2019.

"I've been traveling a lot more this year getting to Israel, Australia, and also Europe which has been amazing and it's great to be back here in Acapulco," Coffey said. "You just have to be ready for the heat. We've just been staying cool in the hotel, drinking lots of water and then you just have to surf a smart heat. Between my brother Ben, Shaun, and John we always seems to have each other in the same heat, at least one of us will, but it's always great to surf against them."

Event organizers will reconvene at 7:30am CDT for an 8:00am CDT start to Round 4 action.

The Vans Surf Open Acapulco pres. by Corona will run July 12 -14 at Playa Revolcadero, Acapulco, Mexico, in front of the Princess Imperial Hotel.