Swell remained for a critical finals day with three-to-five foot conditions delivering to Newport Beach, California's, iconic 56th Street Jetty for more incredible performances. The wins note Sibley's back-to-back domination of the event, her second WSL win of 2019, and a maiden victory for Schilling who continued on to a fourth-consecutive Finals appearance this season in the Pro Juniors. Both made dramatic comebacks to ultimately claim their wins and showing their ability to thrive under pressure.

Samantha Sibley Goes Back-to-Back at RVCA Pro Junior
1:26
The 17-year-old's impressive run through 2019 finally made way for success at the Pro Junior level to take down the RVCA Pro Junior.

A breakthrough year for Sibley continues with a second WSL victory this season after taking her first-ever QS win at the Super Girl Pro and now adds her first Pro Junior win of 2019 by defending her RVCA Pro Junior title. The 17-year-old clawed her way back from third-place all the way to first in the final seven minutes, accruing a 14.87 (out of a possible 20) heat total in that time, to secure an incredible comeback against 2019 North America Regional Pro Junior Champ Caitlin Simmers, along with an in-form Sawyer Lindblad and Ella McCaffray.

Sibley's Semifinal scare led to the women's finals day best performance in the Final and comes away with confidence after dealing under pressure. Sibley's committment to the end sections had her washed on shore multiple times throughout finals day. - WSL / Andrew Nichols

"I'm super stoked to come back a second year and get it a second time," Sibley said. "It's always good to win and to do it two times in a row feels awesome. In the heat before that I barely squeaked through and I was in a weird mood after that so going into the next heat I just thought I'd freesurf and it worked (laughs). I love surfing under pressure. It's my favorite thing and I think it's something that brings me back to competitions every time, and I think I thrive under pressure."

The win moves Sibley to No. 3 just behind Lindblad who now jumps to No. 2 on the rankings heading into the Live Like Zander Junior Pro In Memory of Zander Venezia.

Marshall's incredible form continued into the Final with an early lead after a 7.33 (out of a possible 10) and 7.17 but Schilling kicked into high-gear in the dying seconds needing a 7.03 - blasting an excellent 8.50 to steal a victory as Matson's 8.90 fell short of the requirement but finished runner-up. The 16-year-old posted the day's top heat totals in both his Semifinal and Final performances to close out a dream run in Newport Beach. "I'm feeling so good and so stoked on that win," Schilling said. "I've never won a Pro Junior before and made every Final this year but kept getting third and fourth. Winning one was something I was really looking to do and it's great to finally get it done and now I'm pretty excited for WSL Junior Championships hopefully. I'd love to get the opportunity to be there with Kade (Matson) and the other guys. Then it'd be really cool to get a good result there for a chance at the QS 10,000s and 6,000s."

Schilling sits comfortably at 2,610 points on the North America ranks with the Top 3 earning a spot into the WSL Junior Championships. Lindblad's ability to stay busy and find scores found her great success throughout the event leading to a runner-up performance. - WSL / Andrew Nichols

Adding to the San Clemente sweep, Lindblad and Matson finished runner-up and noted Lindblad's first-ever Pro Junior Final as her breakout year yields more success. The 14-year-old looked well on her way to a victory after decimating a set wave on her dangerous forehand and earning an excellent 8.00 heading into the final minutes before Sibley's comeback pushed Lindblad to second. A stinging loss for Lindblad was evident but the young talent moved up to No. 2 on the rankings and currently has a spot to the WSL Junior Championships heading into the final event of the season.

"It felt amazing making my first Pro Junior Final," Lindblad said. "The experience was incredible and I can't wait for the next event. Staying busy in my heats and not waiting for the perfect wave to come was something that comes to mind when looking back on this week. This contest has given me confidence and I know I'm capable of making Finals." 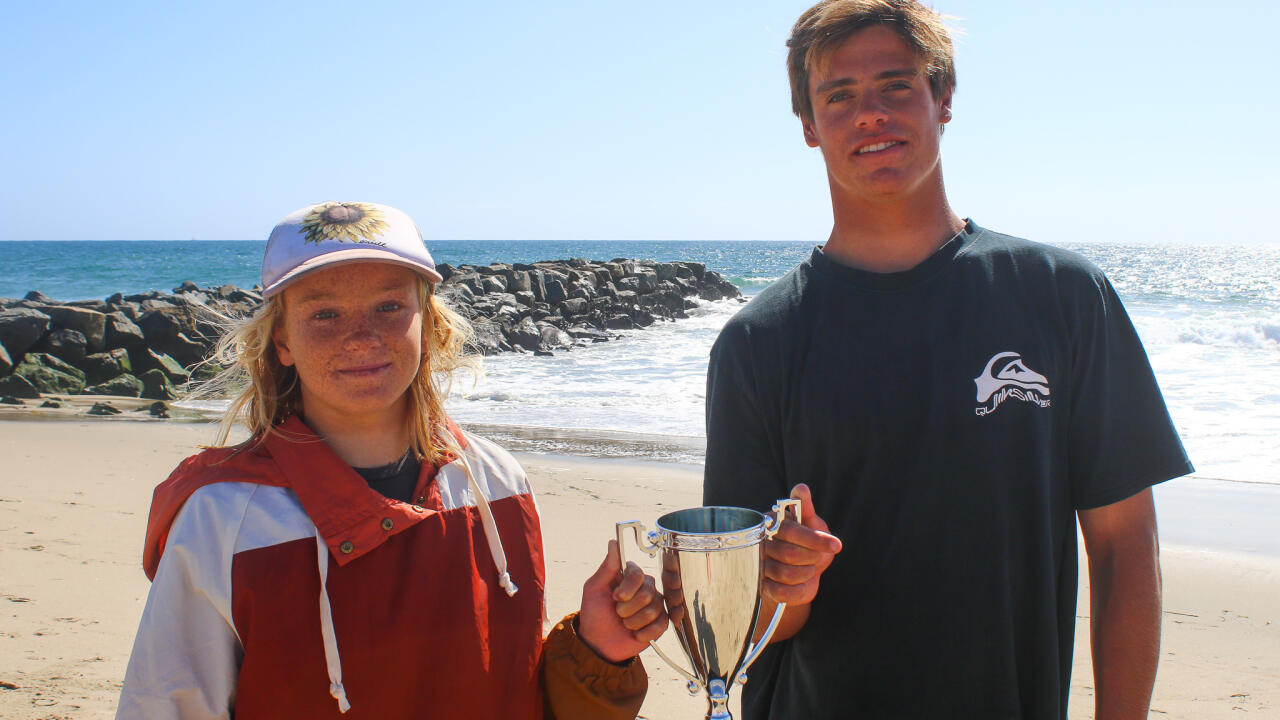 Men's runner-up Matson and womens third-place finisher Simmers sealed up an immaculate season with their first-ever North America Regional Pro Junior titles earning their respective results. This notes Matson's third Final of 2019, just missing out in Virginia Beach with a Semifinal result, and a brilliant finish to the mainland North America season. The 17-year-old's last powerful effort came up short of the 9.57 requirement to overtake good friend Schilling but catapulted him into runner-up after the final horn sounded and solidified his spot atop the rankings.

"My goal was to win but to get second to one of my best friends made it easier (laughs)," Matson said. "I know Jett has been right there the last three events and I felt like he deserved this one. Another goal of mine coming in was to win the Regional Title here and I knew it wasn't going to be easy but it feels really good when you accomplish your goals."

"I really wanted to win this one but my goal of winning the region happening is really cool," Simmers said. "It was great to make another finals day and I'm excited to get to go to Worlds."

More news from their brilliant runs in 2019 will follow

The final event of the season, the Live Like Zander Junior Pro In Memory of Zander Venezia, will run November 7 - 10 at Soup Bowl, Bathsheba, Barbados.