Swell delivered for the World Surf League (WSL) SLO CAL Open at Morro Bay, a men's and women's Qualifying Series (QS) 1,000, opening day with four-to-six foot waves providing an abundance of opportunities throughout men's Rounds 1, 2 and 3. Competition ran through Round 3 Heat 8 in its entirety with a showcase from international talents on hand battling alongside some of North America's top upcoming and veteran competitors.

Brasilian Legend Neco Padaratz Jumps in at Morro Bay
1:31
One of the Brasilians to help pave the way for today's 'Brasilan Storm' sprung into action as an alternate at the SLO CAL Open.

The international field in attendance left their stamp on opening day but no more so than one of professional surfing's icons Neco Padaratz. Padaratz was a part of the initial push from Brasilian surfers on the world stage and helped pave the way for what is now known as the ‘Brasilian Storm'. The now 43-year-old continues to help do so, coaching his son Niccolas, but when the opportunity arose to enter the event as an alternate it was one the competitor inside wouldn't pass up. (Interview in video with Neco/Niccolas) 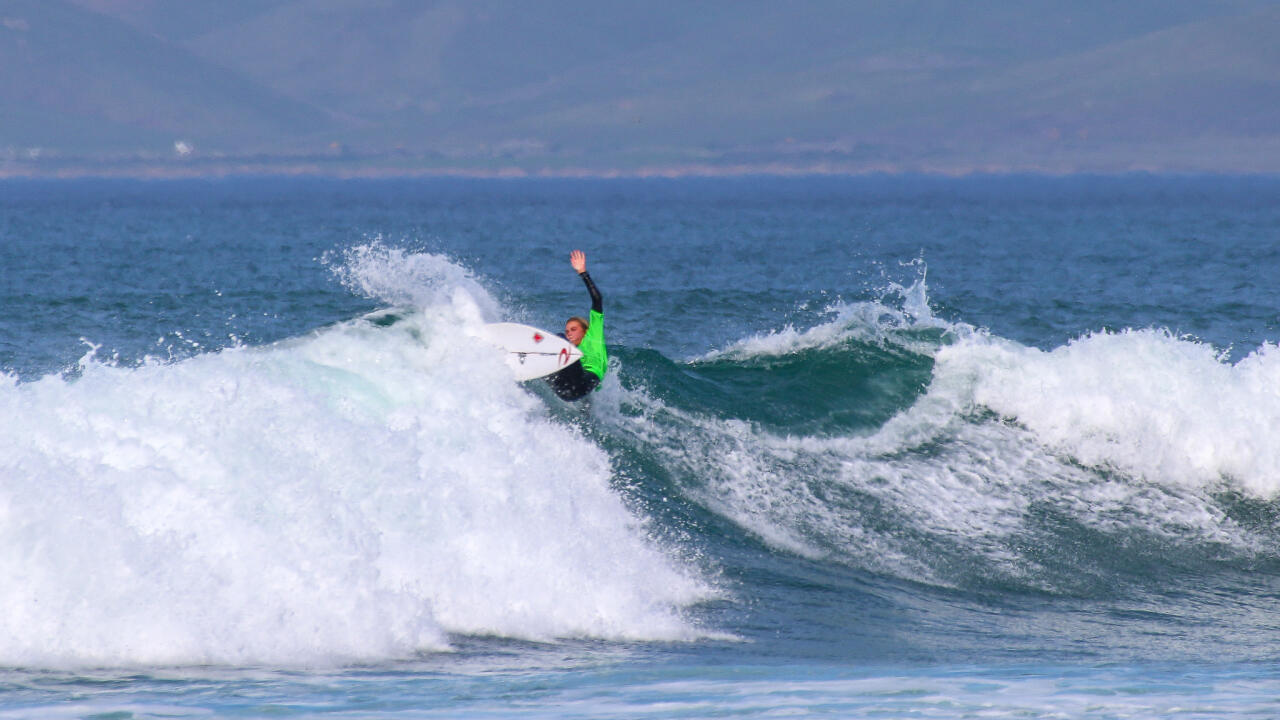 A great birthday unfolded for Luke Wyler after making his way to Round 4. - WSL / Andrew Nichols

Luke Wyler celebrated his 14th birthday with a heat win, topping Padaratz, in his QS debut and surfing a lone heat with the Brasilian legend - both a present he won't forget.

"I was waiting for everyone to come and after a few minutes into the heat didn't see anyone then they announced that Neco Padaratz was coming out and I thought ‘No way!" said Wyler. "I was super excited and I've known him forever and I've always looked up to him so that was really cool to have him in that heat."

Da Le Torre Duo Make QS Debut at SLO CAL Open
0:36
The waters of Morro Bay were pristine for the Chilean brothers Leon and Noel in their QS debut.

Taking opening day by storm, Chilean brothers Leon and Noel De La Torre made impressive QS debuts as both are into Round 4 following today's action. The younger Torre, Noel, enters at just age 14 as he notched the day's highest heat total of a 15.50 (out of a possible 20) and single-wave score of an excellent 8.67 (out of a possible 10). While older brother Leon shared a heat with former Championship Tour (CT) vet Brett Simpson en route to his momentum building run - both starting in Round 1 of competition. (Newsfeed available)

"It was a great experience surfing with (Brett Simpson) and he gave me a high-five before the heat telling me how good the waves were which was really cool," said Leon. "This is my first QS and I'm happy to do it here."

"It was really good to start with scores like that because it's such a high level of surfing at these events," added Noel. "I'm really happy to compete in my QS and start my professional career. Competing is something I enjoy doing and to do it at this level is a great experience to see how good everyone is."

Adding his name to a big opening day of competition, Simpson's dominant backhand attack was on full display in a competitive debut at Morro Rock. The recent SLO CAL Open at Pismo Beach runner-up posted an 8.17 on his opening ride, picking up right where he left off at Pismo Beach, but was well aware of the talented competitor pushing him along the way. (Interview in video)

Event organizers will reconvene at 7:30am PST to determine a possible 8:00am PST start for men's Round 3 Heat 9 with the women's event likely to get underway following men's competition.

The young contender took down two veterans on his finals day charge toward a first-ever QS win.