I was just a grom when I took my first trip to The Bukit peninsula some 15 years ago. At the time, Padang Padang had already been in the limelight for quite a while and Keramas was just to emerge as the next big surf destination on the "Island of the Gods". Driving through the Balinese Jalan's felt like a never-ending maze, and in hindsight I struggle to understand how the hell I managed to ride a scooter from the Bukit to Kuta and back.

When I returned to the Bukit recently, the streets were just as confusing as ever, and now there are even more hoards of grinning westerners and surfers of all ability levels filling up one new restaurant after the next. Although I've been to Bali a couple times and other Indonesian islands over the past few years, I hadn't really spent much time on the Bukit since that first trip. But with the first decent swell of the season on the charts, I decided to jump a flight from my current home base in Thailand and get reacquainted.

The same swell that rocked The Right in Australia about 36 hours earlier showed up to the Bukit and turned on that classic, dreamy Uluwatu lineup with stacked sets to the horizon. Although it was not the best angle for Padang Padang, there were plenty of fast walls peeling without a surfer in sight, reminding all onlookers what is so amazing about being a surfer on the Bukit: with an abundance of A-grade surf in such a close proximity, beautiful waves can still go by unridden.

But, truth be told, many of of those waves were too fast and required a pretty fit surfer to tackle the sweeping current. Great photos of Impossibles and Uluwatu are a lot easier to come by than actual well-paced waves for surfers in the water. But on the right swell and tide, it can be just as good as it looks.

On the backend of the swell, we checked out Keramas for a little variety. Keramas has had the most notable change over the last decade with lots of people drawn to it's more user-friendly lineup, not to mention the fact that it's a perfect right hander with a ramp. But what's more surprising than the development of the Komune Hotel on the beach is the lack of any major hotel at the adjacent lot. I imagine there will be some developments in the future, but for the time being it's still filled with little more than lush overgrowth.

One week of swell flew by and the Bukit was even better the I remembered from my first visit. So many surfers from around the world choose to relocate here, which should come as no surprise considering how it has a little bit of everything, and a lot of perfect surf. Below are a few images that certainly make that case. After only shooting lineups on the first swell, I was eager to get a swim in on the reinforcing pulse a couple days later. A long interval swell mixed with a dropping tide made for some very slow conditions, but there were a handful of good waves that came through. No surprise that local Mega Semadhi nabbed this beauty, locking into a quick tube on the outside and then soul arching effortlessly through the inside bowl. These lines at Impossibles are much bigger then they look and, unfortunately for the handful of surfers in the lineup, the waves were relentless and most surfers were getting swept down the point without a successful ride. Bingin is about as picturesque a location as you'll find. The reef shelf is just off the beach and has a perfect taper up until around 4 foot when the sets start to wash through. Both this unidentified goofyfooter and Barton Lynch looked to be in quite a rhythm out there. 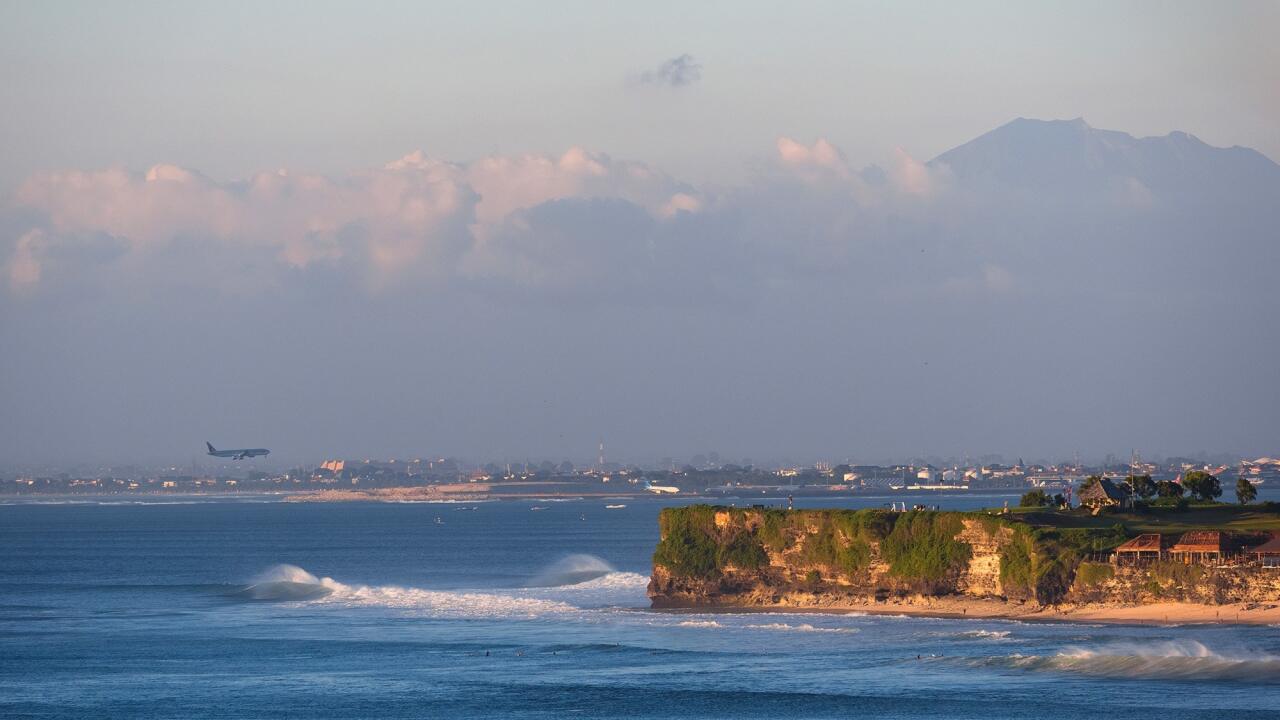 Flying into Bali, you can see the Bukit doing its thing if there's proper swell. Balangan at sunset was gorgeous with views of the volcano in the distance. Sadly, an experienced surfer passed away around the time this image was taken. Another style-cat out at Padang Padang was Dodge Haruman. It's often difficult to get a clean look into the tube because there are a lot of photographers that shoot from the water, but I enjoyed this clean frame as he passed by. 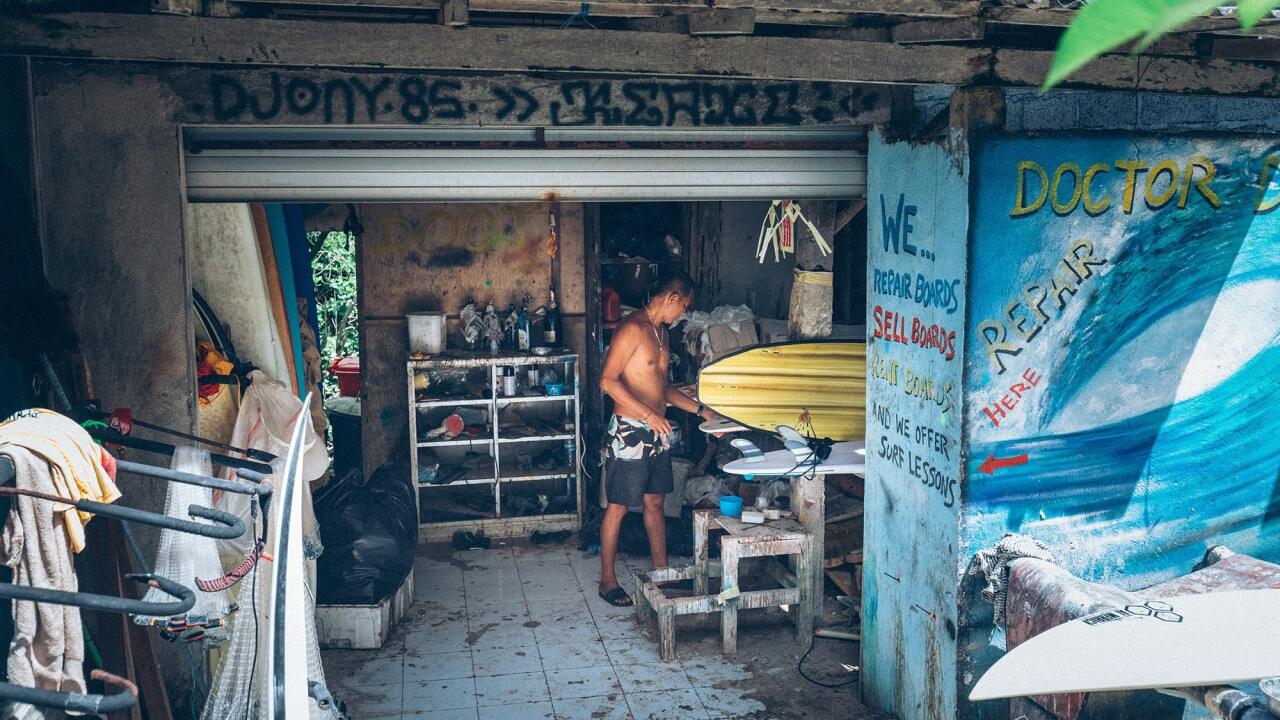 The cliffside at Uluwatu is an elaborate puzzle of new and old warangs, restaurants and piping as well as numerous ding repair guys. There is no shortage of broken and or dinged boards and no more convenient place to get them fixed. Drop your board off after a session and pick it up the following day before heading back into the lineup. It's a perfect business plan. 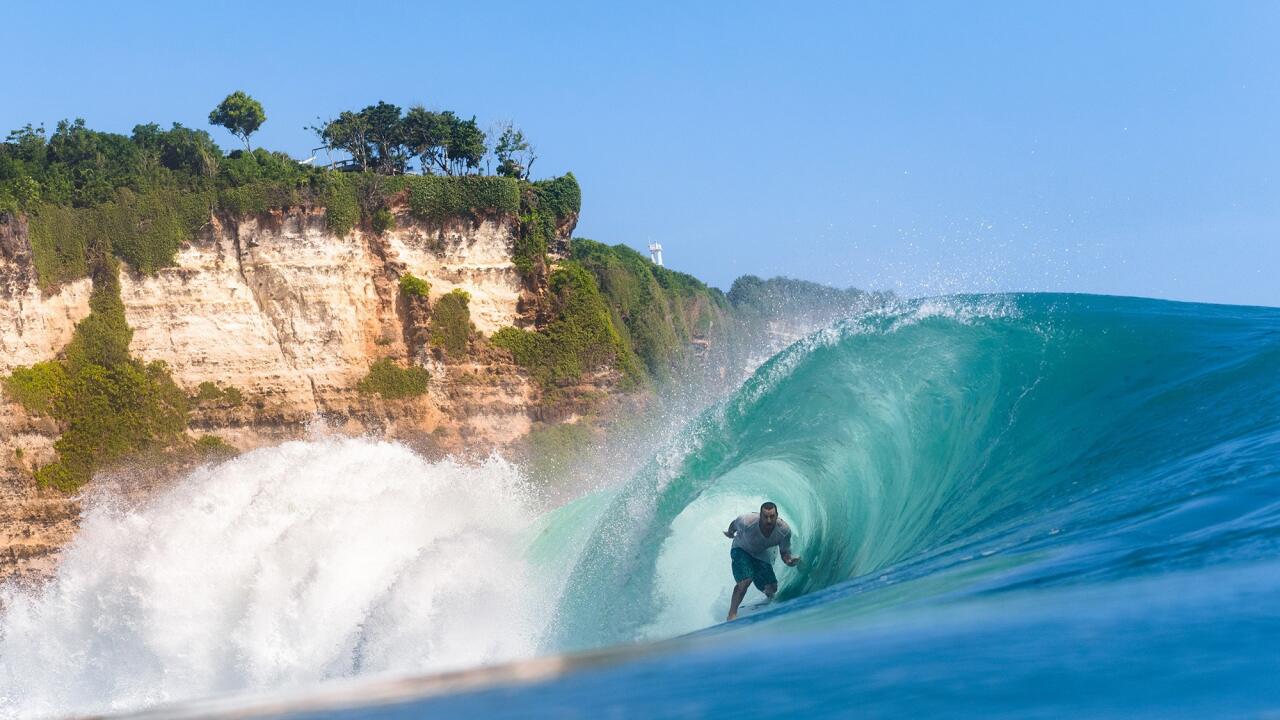 Although Bali is certainly crowded, a place like Uluwatu really breaks up the concentration of people. Spots on the reef are section-y and with the extreme tides, it's quite shifty. It's also a swell magnet, which spreads out the crowds at size. Mitch Coleborn has definitely put in a lot of time out there and knows where to find the slabbier tubes along the reef. At low tide, the cave at Uluwatu is mostly sand. You can relax at the water's edge during sunset and explore the tide pools along the reef. At high tide you have to blindly commit to paddle through the keyhole and be confident in your paddling strength. It definitely helps to time the sets and be patient. Walking down to Bingin, it's tempting to just enjoy the show at a distance and sip on a cold beer or two. Mitch Coleborn again, this time launching into the flats at Uluwatu. Beachside warangs around Keramas are the key to surviving long surfs. Getting out of the sun for a bit is mandatory and the food is amazing. Jack Robinson is fresh off a new sponsorship deal and was absolutely ripping at Keramas. He seems happy, fit and focused and his surfing shows it. Pretty cool to watch him from the water at one of the most high-performance waves on the planet. It's refreshing to see some of the grassroots movements trying to eliminate single-use plastic around Bali. Metal straws, reusable cups and reusable bags-we all need to help out because this is the common reality surrounding many of the beaches in Bali, Indonesia as a whole and so many other countries globally. Jay Davies and Keramas is a great combination. Jay surfs with so much power and conviction out there. Perfect waves are so common in Bali that this evening peeler didn't garner too much attention from the beach goers. 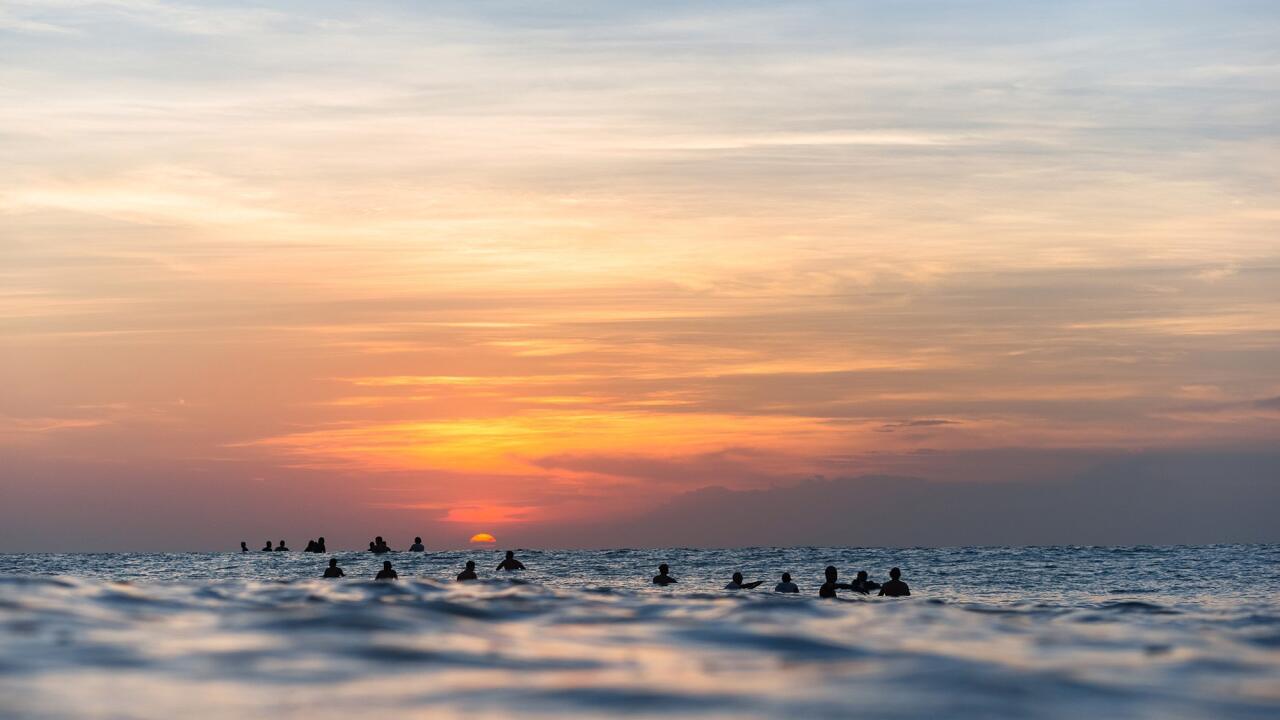