Hawaii is famous for a lot of things. Perfect waves and perfect weather, to name a few. Stunning views and crystal clear water to name a few more. One of the most famous things it is famous for, however, is its coral reefs. And according to a study in the journal PLOS One, those reefs could be in some serious trouble.

Back in 2016, survey cruises conducted by the National Oceanic and Atmospheric Administration (NOAA) picked up strange specimens of an undetermined red algae. It "rapidly attained alarming levels of benthic coverage at Pearl and Hermes Atoll, Papahānaumokuākea Marine National Monument, Hawaiʻi," which, in layman's terms, means it spread like wildfire in shallow shoreline waters. A few years later, they went back to have another look, and what they found was strange indeed.

"By 2019 the seaweed had covered large expanses on the northeast side of the atoll with mat-like, extensive growth of entangled thalli," the abstract from the study reads. "Specimens were analyzed using light microscopy and molecular analysis and were compared to morphological descriptions in the literature for closely related taxa. Light microscopy demonstrated that the specimens likely belonged to the rhodomelacean genus Chondria, yet comparisons to taxonomic literature revealed no morphological match." 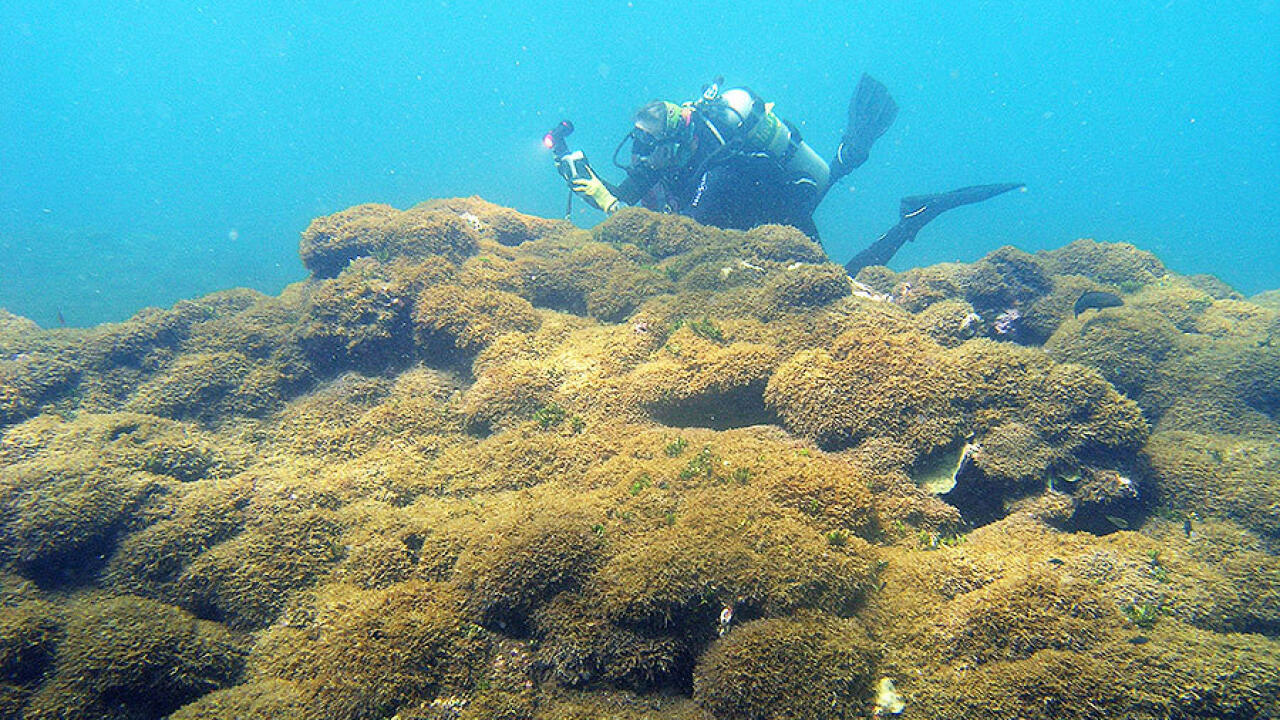 College of Charleston professor of biology Heather Spalding documents a mat of invasive-like algae at Pearl and Hermes Atoll. The algae has smothered all native algae and corals. - WSL / Taylor Williams/NOAA

In short, it appears that the algae is likely to be an unknown species. That's a problem, because the Papahānaumokuākea Marine National Monument is uninhabited, remote, and pristine -- which makes it susceptible to invasive species like this one.

"This seaweed is not closely related to any known Hawaiian native species," the abstract continues, "and is of particular concern given its sudden appearance and rapid increase in abundance in the Papahānaumokuākea Marine National Monument."

Papahānaumokuākea Marine National Monument is a vast place: some 583,000 square miles of ocean that serves as home to many rare species of coral, fish, birds, reptiles, and marine mammals.

"This is a highly destructive seaweed with the potential to overgrow entire reefs," Heather Spaldin, study author and assistant professor of biology at the College of Charleston, said in a statement. "We need to figure out where it's currently found, and what we can do to manage it. This type of research needs trained divers in the water as quickly as possible. The sooner we can get back to Papahānaumokuākea Marine National Monument, the better."

According to IFLScience, the algae has been named Chondria tumulosa. Research divers exploring the Pearl and Hermes Atoll found that it grew mostly between 33 and 50 feet down, forming thick, seven-inch mats that are smothering sections of reef.

"I think this is a warning of the kinds of changes that are to come for the northwestern Hawaiian Islands," said UH Mānoa College of Natural Sciences Interim Associate Dean and Professor Alison Sherwood, the lead researcher on the project. "We have, not until now, seen a major issue like this where we have a nuisance species that's come in and made such profound changes over a short period of time to the reefs."

Coral reefs need the sunlight that filters down through the water so that the tiny single-celled dinoflagellates, known as zooxanthellae, can provide the coral with sustenance. If they don't, this of course starves the coral, which has a massive effect on the marine animals that use the reef for food and shelter.

"Until we understand whether it is native or introduced, and until we better understand what is driving this outbreak, it is critically important that research divers and research ships do not inadvertently transport this species to other islands," Randall Kosaki, NOAA research coordinator at Papahānaumokuākea Marine National Monument said. "All of our dive gear was soaked in bleach, and all of our dive boats were sprayed down with bleach prior to returning to Honolulu."