He is being called "King of Pipeline", and rightfully so. Consider that on January 1, 2020, only seven months and a couple weeks before his untimely death of an apparent heart attack on July 17, Derek Ho rode a gnarly, Second Reef bomb-to-barrel that was featured in O'Neill's annual "Wave of the Winter" contest.

34 years after winning his first Pipeline Masters title with a show-stopping ride that was called "the tube of the decade", 55-year-old Derek Ho still commanded pole position in the most fiercely contested lineup on earth, was still capable of scratching into a ‘wave of the day' and drawing a pure line though the sport's most hallowed hollow, still demonstrating a full measure of the ability that, with his second Pipe Masters victory, won him a World Title in 1993. King of Pipeline, indeed.

Derek Ho, 55, At Late-Season Pipeline
1:29
In April, during the last swell of the 2020 season, Derek Ho dances with the wave that he will forever be remembered for.

Only three other surfers have earned that moniker: Butch van Artsdalen, on the strength of a single session in 1962, Jock Sutherland, during the relatively mild winter season of 1968-69, and the legendary Gerry Lopez, who, in truth, only reigned supreme from 1971 to 1975.

Derek Ho, on the other hand ... well, just watch the videos.

Compare the epic ride from 1986 to 2020's, the current wave being way sketchier, the odds way greater, the performance way more impressive, by any standard. Yet his more than three decades in the peak at Pipe hardly tell the whole Derek Ho story, any more than does the 14 years he spent competing on the World Tour, or his four Triple Crown of Surfing titles, or any of his other numerous contest victories. Not even -- or perhaps least of all -- his World Title.

Keep in mind that the Banzai Pipeline is a mainland haole construct. Hawaiians called the place Ehukai, meaning "sea spray", which makes perfect sense when you consider the hydraulic dynamics of the waves there. That's the Hawaiian story -- the uniquely Hawaiian story -- and so is Derek Ho's. 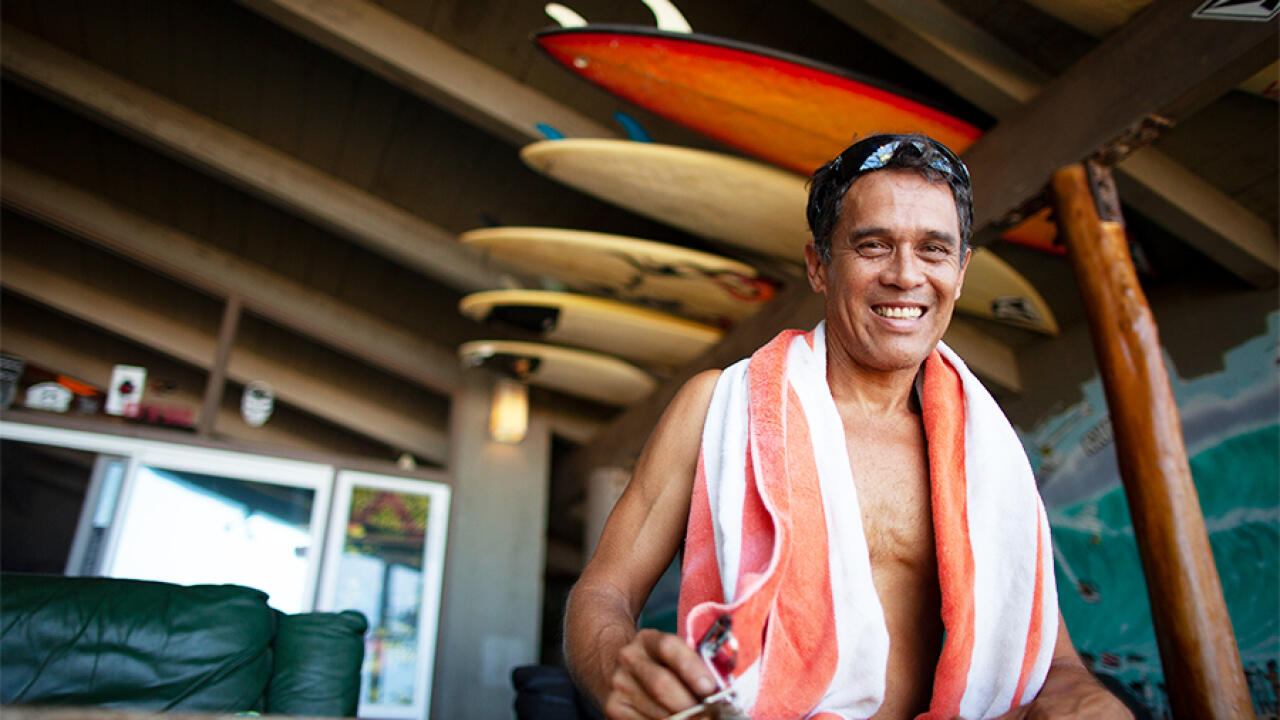 Ho stands on the porch with a warm smile of Aloha. - Brian Bielmann

To better appreciate this perspective, don't look to the classic Pipeline clips, but rather find a way to stream the ‘80s surf flick "Ticket to Ride" by Steve Soderberg, which features the only footage shot at 1985's Inland World Surfing Championships, held at the Wildwater Kingdom wave pool in Allentown Pennsylvania.

There's Derek Ho and Australia's Tom Carroll in the final, wick-whacking their way across the gutless, knee-high chop, banging their boards on the coping, doing anything to earn a few points before dragging their fins in the shallow end.

But there's a moment at the end of one of Ho's waves, when, following an impressive anaerobic burst of board work, he straightens off and gracefully, almost delicately moves his front foot to the nose, hands quiet, back arched, pausing, in this chlorinated theater of the absurd, and for at least a couple seconds just surfs. Revealing, in this quiet moment, the little kid from Waimanalo, on Oahu's Eastside, who somehow found himself hanging five in that Pennsylvania pool. Even being born and raised in Hawaii, scion of a venerable Island family with impeccable beach boy lineage, this destination wasn't a foregone conclusion; Waimanalo's a long way from Waikiki, and not just on the round-island bus. This is Oahu's windy side, the wetter, dark side of island life, lived out in the shadow of the pali, with only a narrow strip of green between the steep green cliffs and the roiling blue ocean.

Tough place to grow up, easy place to grow tough, and young Derek, product of a broken home at this point, definitely put a foot on that path, one that in 1982 led to a 10-day stint at the Oahu Community Correctional Center. And may well have escalated to an even longer stay at nearby Halawa State Prison had it not been for the concerted efforts of family and friends -- most effectively older brother Michael Ho, already an international surf star, and Brian Surratt, one of the North Shore's heaviest locals, both of whom pushed 18 year-old Derek to take advantage of his latent surfing abilities. Derek Ho on the cover of SURFER Magazine in 1991. - SURFER

Which again, was not a sure thing, Oahu's east side being no easy place to be a surfer. Weird offshore reefs in Haaula, Bellows wind swell, Sandy "it's sorta like a surf spot" Beach; this windward shore is a far cry from Waikiki's accommodating "cradle of surfing civilization" or the North Shore's front-lit fantasy land.

Yet maybe it was because of this less-glamorous apprenticeship -- if you can decipher the jagged reef Rubik's Cube that is the Sandy Beach lineup, you can pretty much surf anything -- that Derek developed the functional-yet-spontaneous style that, once properly applied to more premier Island breaks and eventually the pro tour, helped establish Michael Ho's kid brother as one of the sport's most versatile performers.

It's at this part of his story that the inclination to fall back on statistics asserts itself: contests won, year-end rankings, titles garnered. Career-arc stuff. And Derek earned it, every step of the way, not being coddled along for a dozen events on today's "Dream Tour", the way smoothly paved with non-elimination rounds, custom lockers and Rosy Hodge, but grinding out the hard miles during the ‘80s and ‘90s, with dozens of events and none of them at Cloudbreak or Teahupoo ... or even Lowers, for that matter. 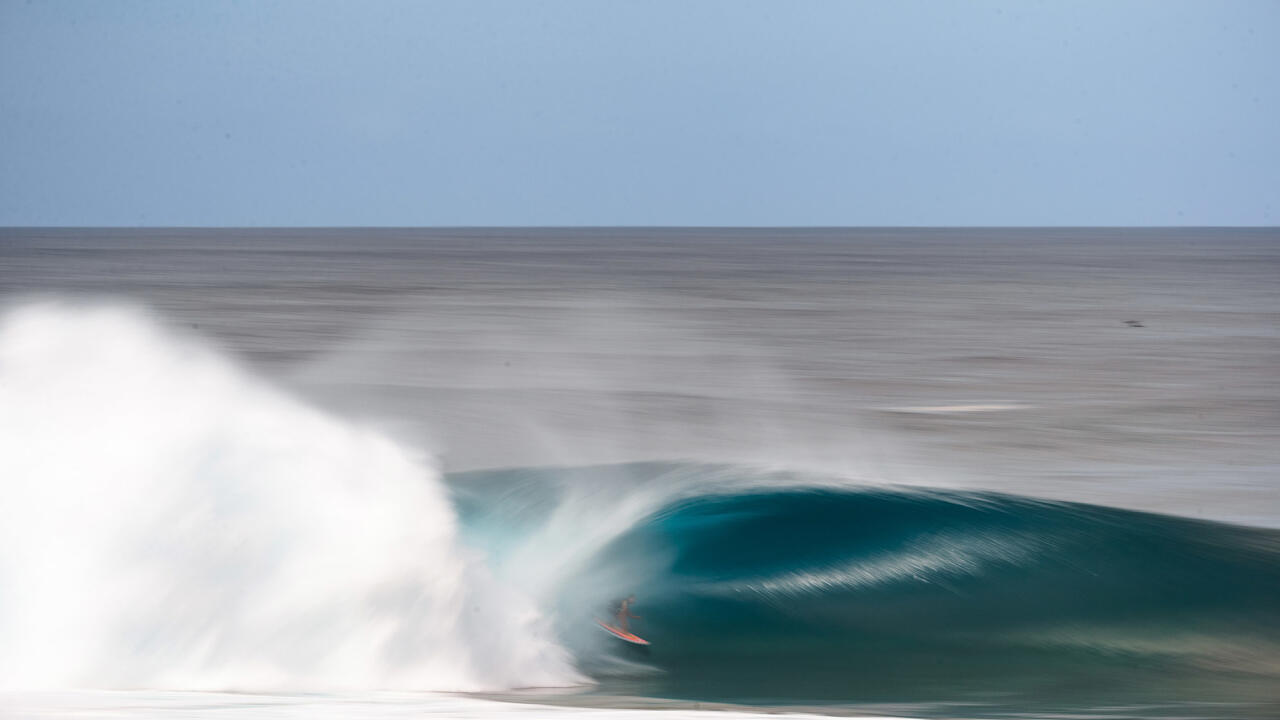 Two-time Pipe Master and four-time Triple Crown winner, Ho was in his element on the biggest days at Pipeline. - Ryan Craig

Pro surfers of that period faced a calendar marked by mostly crappy beach break and blown-out Sunday afternoon finals, the only remotely tempting carrot dangled being the season finale in Hawaii, and events at Sunset Beach and Pipeline.

And sure, Derek, the once reckless Waimanalo homeboy-turned disciplined competitor, eventually hefted his Duke and Pipe Masters and Triple Crown trophies. But here's the thing: while eminently capable of making his surfing looked structured, Derek seemed to find on virtually every wave he rode, whether a Pipeline widowmaker, the Chiba shore break or a Northside Huntington wedge, a moment of unself-consciousness. No longer performing, but simply surfing.

You can see it on the remarkable barrel that won him his first Pipe Masters, the clean elegant line, daring the foam ball to catch him, his rail engaged from take-off to spit-out, the look of amazement-wonder, actually-as he emerges from that blast of ehukai and glides out onto the shoulder.

And you see it on his "Wave of the Winter" entry, ridden over three decades later, the late drop, fins and rails releasing, reconnecting not with determination but by instinct, almost as if blind and drawing on extrasensory input to re-engage the rail in the perfect slot and project down the line, safely positioned under the guillotine's fall. 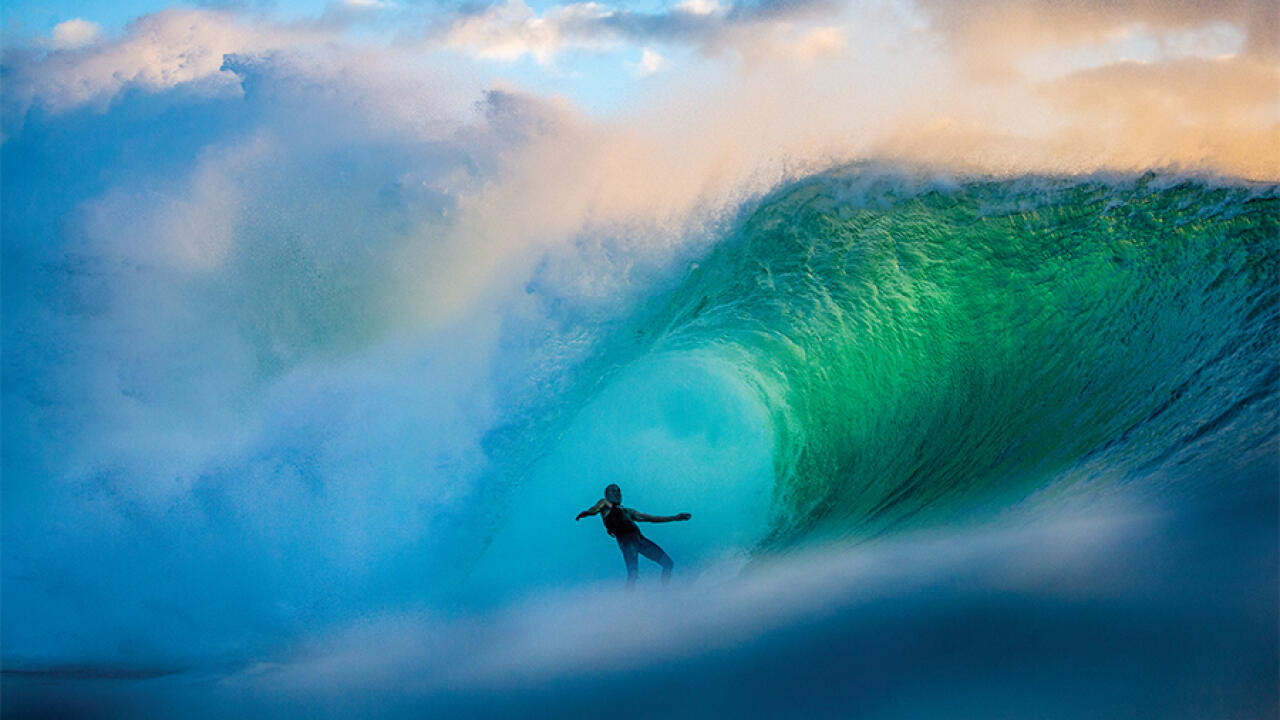 It was this elemental connection to the act of surfing that was most Hawaiian about Derek Ho, and his life's story. Was it a charmed run? Not always. Since back in the mid-1960s, when young islanders like Eddie Aikau and Ben Aipa had to campaign their way into contests most often dominated by Mainlanders, Hawaiian surfers -- meaning Hawaiian by blood, not by zip code -- have inexplicably been under-represented in the world of competitive pro surfing, and often equally under-appreciated even when they succeed.

Derek was no exception, his '93 World Title was one of the sport's most unheralded. "Put it this way," he once quipped. "I haven't been subjected to the overexposure a world champion normally gets." Sad, but true, the wider surf world seemingly taking the Aikaus, Aipas Abelliras, Kealohas, Moniz's, Garcias and Hos -- at least Michael and Derek -- for granted, as if their superior abilities were only to be expected, if not necessarily rewarded. 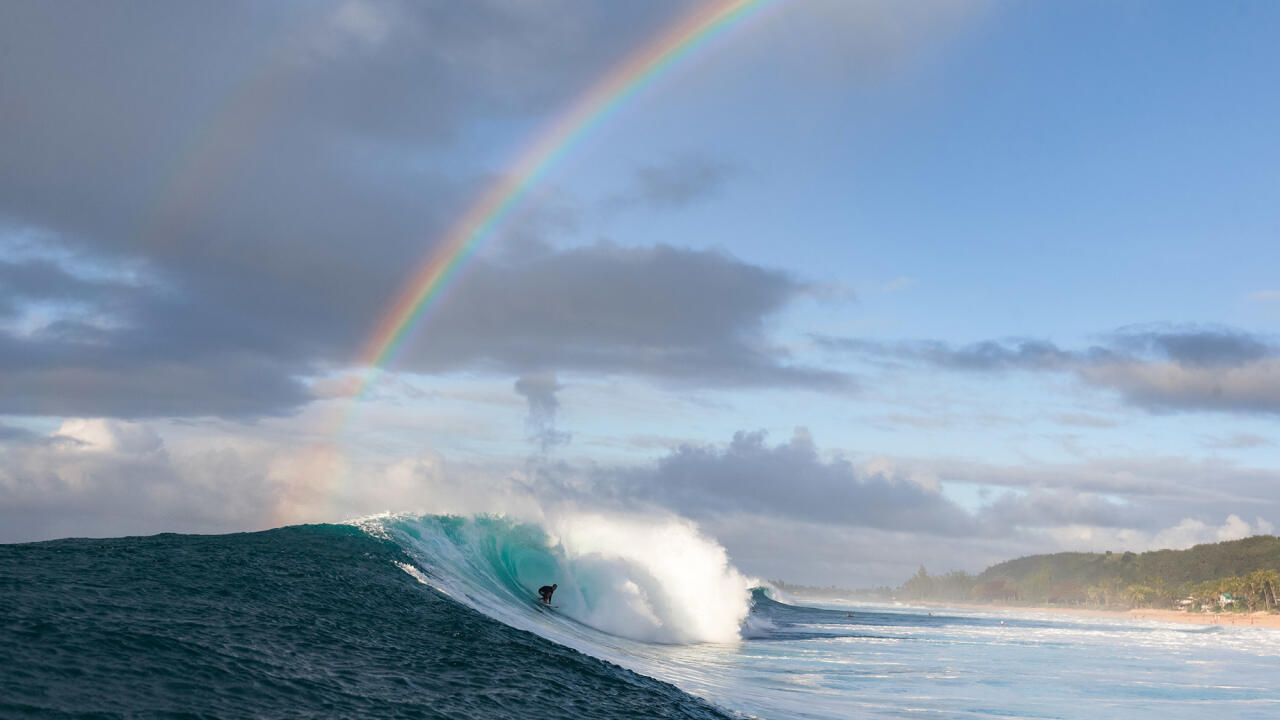 On the other hand, throughout his career and during the decades since, his was an expression of an extraordinary birthright, carrying on the tradition of not only his remarkable surfing family, but of a culture of watermen and women whose roots go back centuries. Whether in the barrel at Pipeline or in the shallow end of that Pennsylvania pool, Derek Ho personified the spirit of Hawaiian surfing: proud, loyal, a bit reckless at times, but almost always dignified, and true to the essence of why we ride waves.

Go back and re-watch those epic rides of his, past and contemporary, marvel at the level of enduring mastery exhibited by that diminutive, 55-year-old man, and see if you don't come away inspired to be the best surfer you can be. This inspiration is Derek Ho's parting gift to the surfing world. So honor the man by riding your next wave the way he always did, with all your heart and soul.