- Nick Liotta for Cami and Jax

The most iconic piece of women's swimwear was designed by a man. It was born from a rivalry between two men, actually: In the early '40s, French automotive-engineer-turned-designer Louis Réard designed a women's bathing suit with a midriff. Not long after, Jacques Heim debuted the two-piece "Atome," which barely covered the belly button, but was quickly eclipsed by Réard's rebuttal: the infamous bikini, composed of four triangle pieces of fabric.

The bikini simultaneously liberated women from the confines of horribly impractical beach attire while tethering them to sexual objectification, the kind of which led to scenes in the '80s like women's surf heats being overshadowed by bikini contests staged on the sand at the same time.

You can find anecdotes like this in Lauren Hill's new book "She Surf: The Rise of Female Surfing," which explores (among many other thoughtfully examined topics) the imperfect history of women's surf apparel. Even as women's surf labels like Roxy emerged in the early '90s, they were spinoffs from male-dominated companies, where female riders felt pressure to look and act a certain way lest they be cut from the team.

For some women, barely-there surfwear reflected how they felt most comfortable in the water, and they resisted any notion that they should repress their sexuality on the beach. But surfwear isn't only an issue of sexuality, it's a matter of practicality. Triangle tops get ripped off. Adjusting a thong between every cutback is…distracting. The influences that dictated women's surf apparel design weren't fully in the hands of women, which meant women's needs weren't fully addressed and choices weren't adequately provided to them.

In the early 2000s, independent, female-founded surf brands began popping up, their paths paved by pioneering brands like Seea which aimed to make surfwear that could perform at the highest standards of surfing - and of style. Today, there are more spotlight-worthy female-owned brands than we can count, and more than we can include in one roundup. But here are six female-founded surfwear brands whose pieces your author surfed in this summer. There is a wealth of choice now in what women surfers can wear in the water. And if you still want to wear a thong and a triangle top, there are plenty of options out there for that too. The difference is that now, some of them are designed and sold by women, on their own terms. 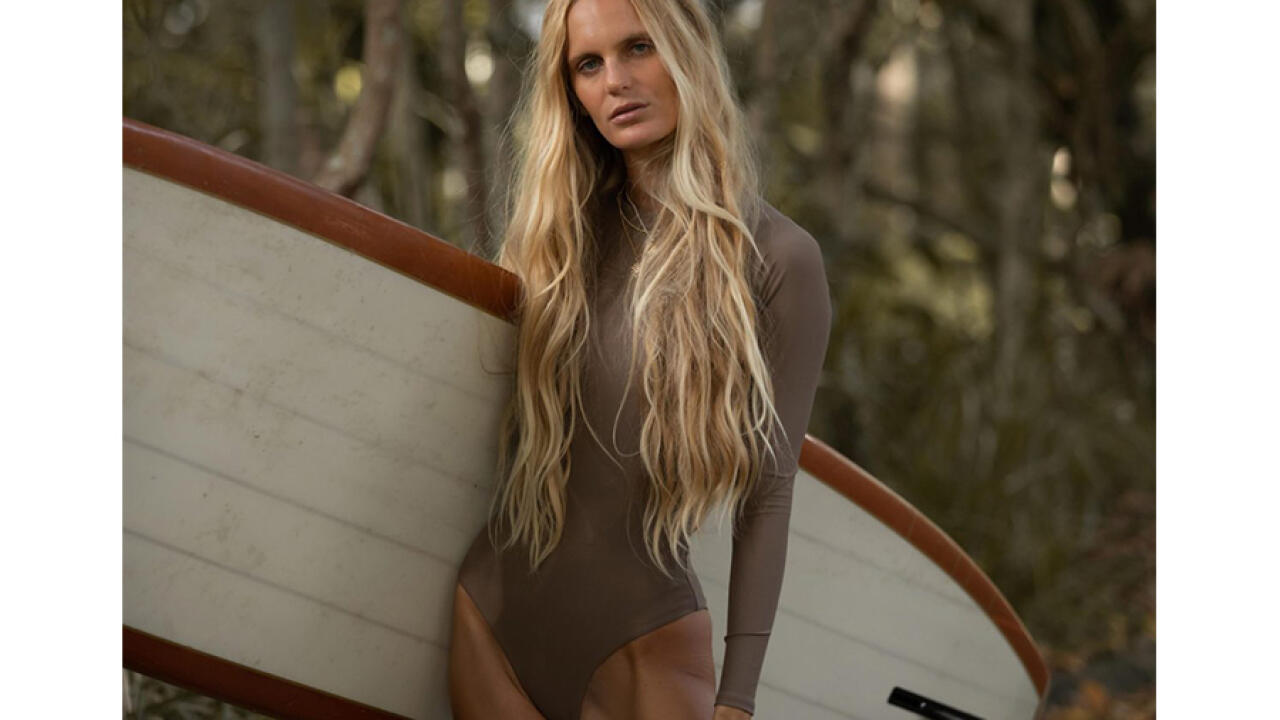 Hanalei Reponty began surfing for Rip Curl at age 15, enjoying a budding career as a competitive longboarder and model, which positioned her especially well for making a line of surfwear that touts as much function as it does fashion. But it was her upbringing in Tahiti that most informed and inspired the surf label that she and her mom founded, Abysse.

"Creating Abysse has been a magnificent journey through celebrating and creating for women that love the ocean as much as I do," says Reponty. She and her mother, Raphaele, wanted to root their brand in sustainability principles that were in harmony with the ocean environment. Abysse wetsuits are made from Yamamoto limestone neoprene (non-petroleum based), swimsuits are made completely from extra-soft ECONYL (derived from recycled fishing nets), and the entire Abysse line is made in California.

I tested the Ama One Piece ($300), a long-sleeved surf suit with a high neckline and full back for total sun protection. Medium bum coverage and a high-cut leg line add style, and so does the unique Cocoa colorway. The fabric is butter smooth, and a double lining gives you a smoother contour while adding durability. 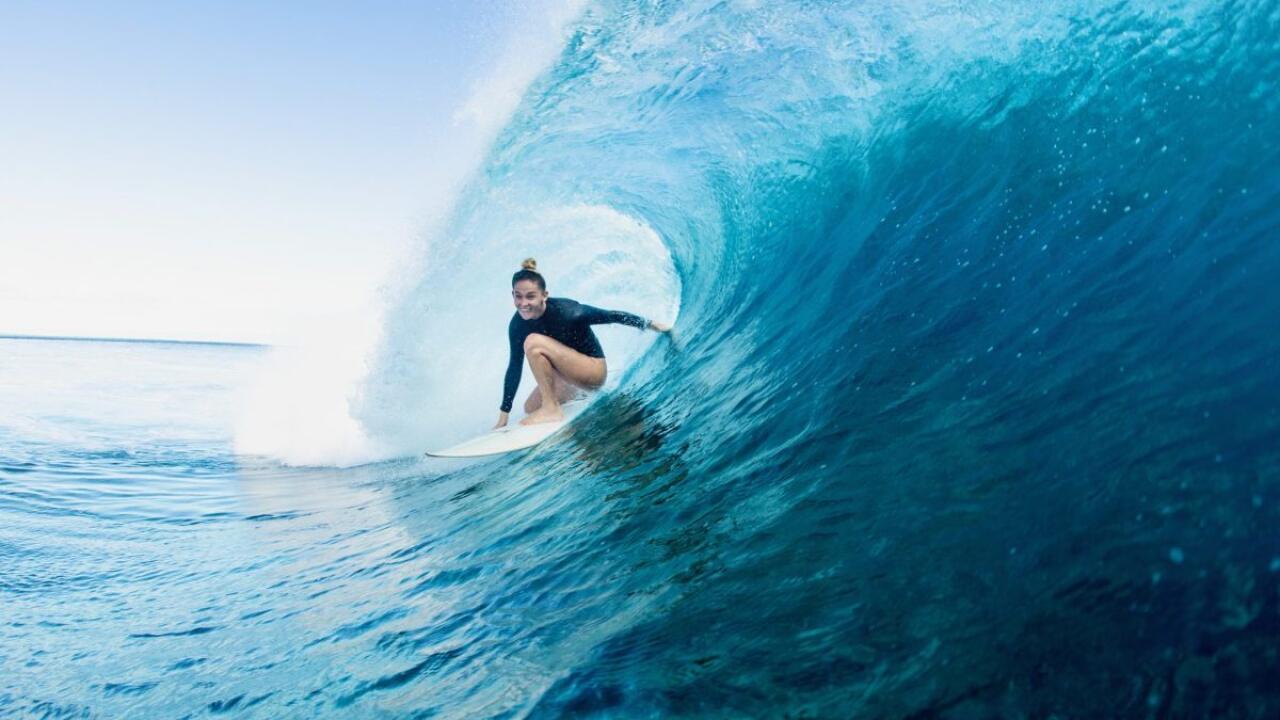 Kauai-raised sisters Camille and Jackie Brady also have their roots in competitive surfing, but these days they spend most of their surfing time logging Malibu Point, just a few miles north of the Santa Monica storefront for their label, Cami and Jax. The sisters were primed to create a business together after graduating college, Camille with a communications and marketing degree and Jackie with one in apparel design and merchandising. Cami and Jax crafts feminine styles like open-wrap tops and chevron-slit bottoms into fully performing surfwear.

I spent the summer in the Crystal Top ($125), a long-sleeve crop top with flattering "V" lines on the chest and back. The double-lined chest and back panels combined with single-lined sleeves provide layering where you need it and flexibility where you don't, and thanks to the cropped waist, the Crystal protects you from the sun where it matters most while keeping you cooler than a full-length rashguard would. 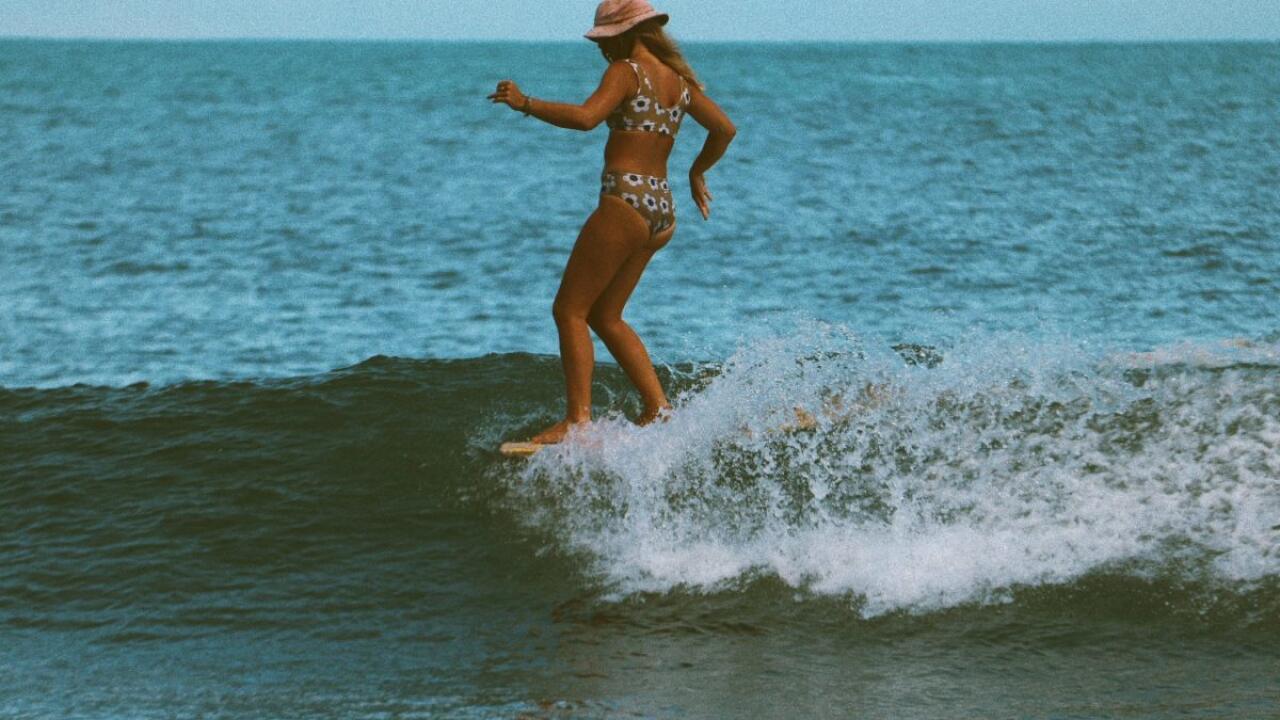 Seeking a simpler life, Marine Mausse and her young family left France for a more present existence in Bali. She once told "Herewith," "We sold our furniture, our boards and our cars. We closed our bank accounts and phones, we booked a one-way plane ticket and left…We needed to feel every second intensely and see the real side of things." While in Bali, Mausse created Dolphin Love, a brand that reflects both simplicity and boldness. Dolphin Love pieces are only available in small batches of 30 pieces maximum, and the vintage cuts are hand-sewn by two seamstresses in Bali. They're made from fine Italian fabric, and the designs are inspired by bright retro florals, sometimes mixed with gold velours and animal prints.

I tried the Summer Orange Top (€79) and Brown Flower Field Bottom (€79), both of which evoke a '70s hippie style. The elasticated seams on the cropped, long-sleeve top and on the high-waisted, full-coverage bottom ensure the suit stays on all session, no fidgeting required. The cuts are modest, letting the playful prints steal the show. With only 30 of each style produced, it's not too likely you'll spot a twin in the lineup. 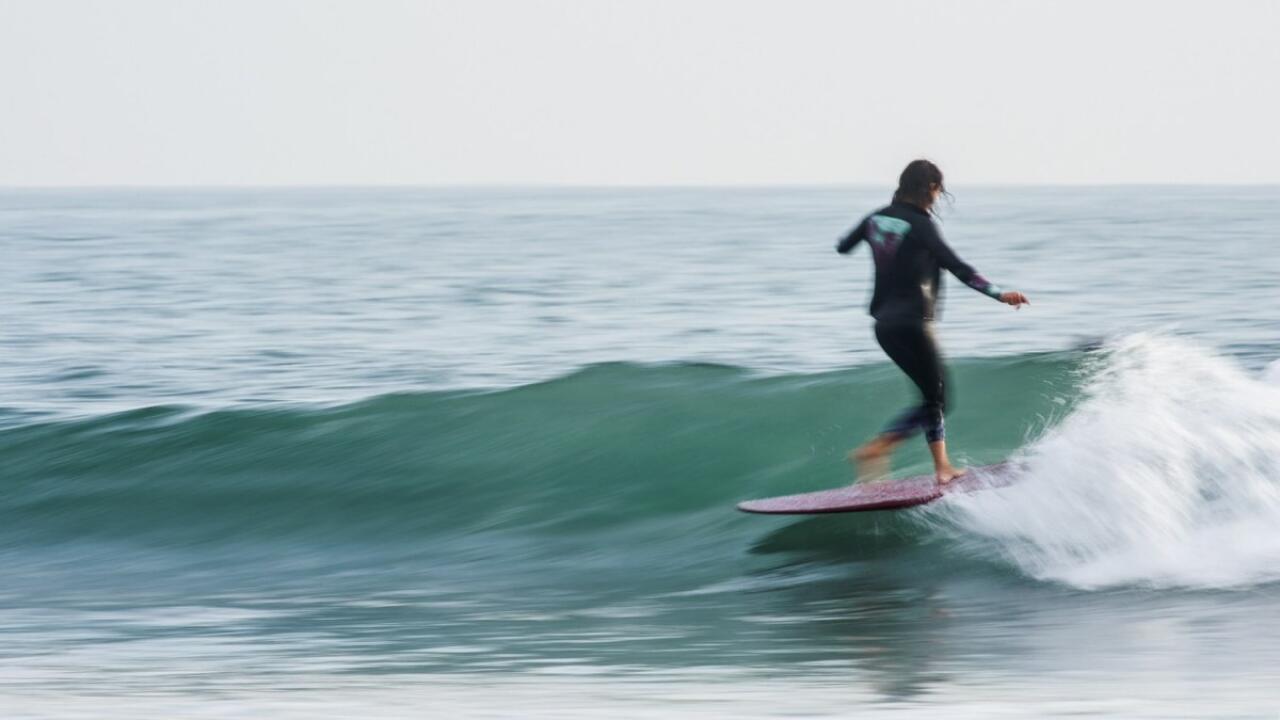 Who better to design your surfwear than one of the most talented longboarders in the world? A professional surfer since age 17, Kassia Meador forewent her sponsorships in 2013 to build her own brand, one aimed at generating "the highest vibe [in the] lowest impact way."

While Kassia Surf touts sustainability practices like a wetsuit recycling program, it's grounded in protecting the spirit as much as the earth, inviting its wearers to "empower yourself and your community to expand your mind, body, and soul through healthy active lifestyle choices and experiences."

I've been wearing the 2MM Psychedelic Long Arm Jacket ($160), that lives up to its name with a giant tie-dye triangle across the back and matching pattern on the cuffs. The Psychedelic Long Arm is a perfect layer to throw over a long jane or one-piece in that summer-to-fall transition. The smoothie V on the chest and back resists wind, and the thermal heat lining underneath gives extra warmth to your core. A place to secure a key is still a tough-to-find feature in lots of women's surfwear, so the zip compartment on the left arm with internal key loop was much appreciated. 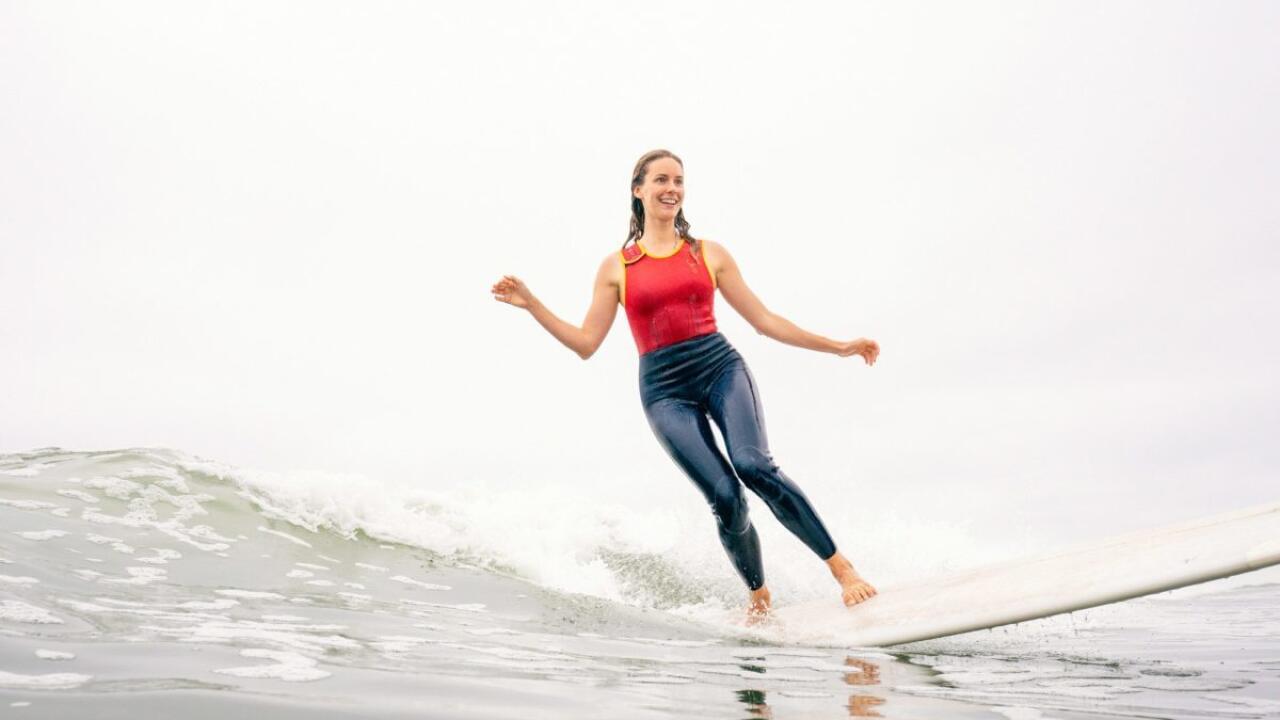 When Amanda Chinchelli left her home in Italy to join her boyfriend (now husband) in San Francisco, she didn't plan to pioneer an entire new genre of women's surf apparel. But that's exactly what she did by creating Seea in 2011. At the time, there was no such thing - at least not widely available - as a refined, practical and beautiful surfsuit for women. Chinchelli told Hill in "She Surf," "I was very much tired and offended by the sexualized images of women in the surfing world. It felt necessary to create a product and a brand designed for women, by women."

Today, Seea supplies a full range of surfwear options, from bikinis to rashguards to springsuits, and almost any woman could find a fit and pattern to complement her taste. All pieces are made within 70 miles of their San Clemente headquarters, and most of the line is made from recycled, upcycled or natural materials.

That includes the Sydney 2mm Yulex Long Jane in Macaw ($250), the most comfortable and practical long jane I've ever worn. Yulex is a natural, non-petroleum-based rubber, which tends to be on the stiffer side compared to other neoprenes, but the Sydney Long Jane is stretchy and forgiving, and comfortable enough to surf in for hours. There are thoughtful surf-inspired details, like reinforced knees for knee paddling and a long arm opening to eliminate chafe. Our favorite feature was the velcro and snap-button closure on the right shoulder, for easy on-off, especially for those with shoulder issues. 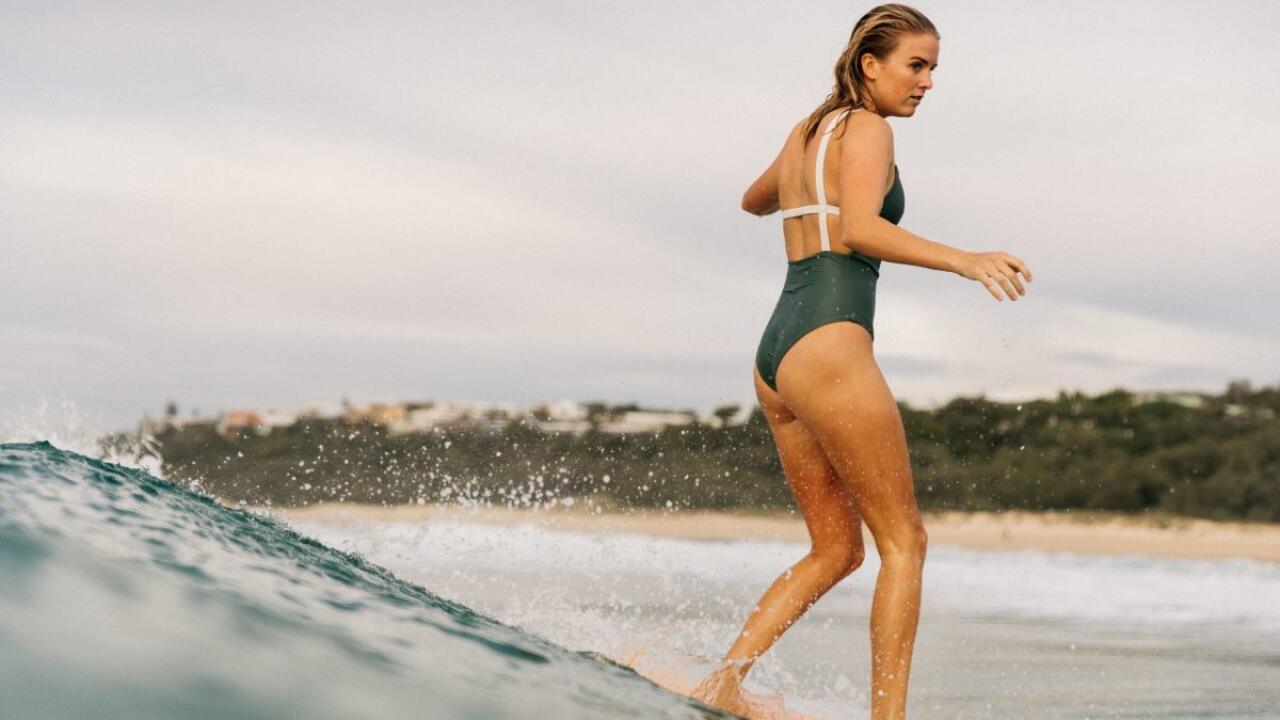 Having been a designer for Patagonia, J. Crew and Deus Ex Machina, Erika Seiko Togashi was no novice when she established September The Line. In fact, you can see influences of all those brands in this incredibly sophisticated label: a combination of function, subtlety, and edge. Togashi honed in on her vision after moving from New York to Bali, clocking more hours in the water than she ever had and realizing her dissatisfaction with her surfwear options. September The Line suits are truly beautiful, and wearing them almost feels like you got dressed up to go surfing. But they're also sturdy and sensible, able to withstand duck dives and wipeouts without any wardrobe malfunctions. Less truly is more with STL, "where modernist design principles honor simplicity and form over unnecessary frills and details."

I wore the Paris One Piece in Army Green ($162). High-cut legs and a mid-waist seam flatter any shape, while a medium-coverage bum, high-waist back and contrast-color elastic straps add style. The double-lined, 78-percent ECONYL recycled fabric feels luxurious to the touch, even though it's made from recycled plastic and recovered fabric scraps. 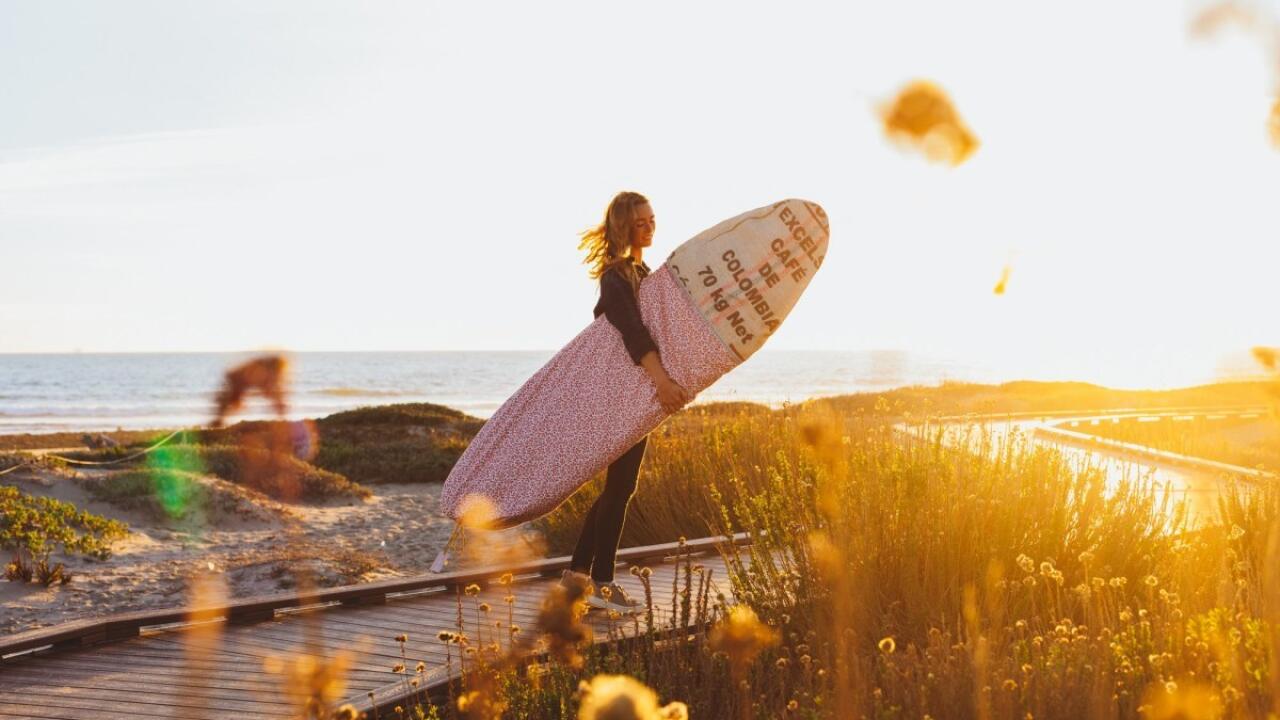 Ok, so this brand fits more in the category of surfgear rather than surfwear, but it's one of our favorite female surf-startup stories. Seven years ago, professional free surfer Anna Ehrgott was searching for an appealing, American-made board bag and came up empty. She dusted off her sewing machine and crafted her own from fabric she sourced at a thrift shop. Friends started asking if she could make them bags too, and as word spread, the surf shop where she worked began collecting custom orders for homemade creation. Thus began Sagebrush Bags, a true labor of love that has allowed Anna to achieve parallel dreams of owning her own business and traveling the world to surf.

Today, Sagebrush sources deadstock (leftover) material from other businesses, and has expanded the line to include scrunchies, snowboard bags, and in the last few months, some darling adjustable masks. Sagebrush is now carried in surf shops like Mollusk and Bing, but it's still Anna sitting at the sewing machine, often late into the night, creating each piece and single-handedly running the business that has given her the independence to be self-employed since she was 22.

My board has been wearing the 9'6 Sagebrush Bag ($150, prices vary according to size) for a long time (currently available in a beautiful "Hilo" tropical flora print). The drawstring closure creates a snug fit for boards between 9'1″ and 9'7″, and a width up to 23″. The canvas fabric topped with a coffee-bean-sack nose is durable enough to last years, and is layered with a wax/water-resistant lining that keeps it easy to slide a board in and out of. These bags spark conversation wherever they're seen, and the limited fabric runs mean yours will be one of only a few.

With the Elimination Rounds in the books in Portugal, a thrilling day of action is on tap for final day of the 2020 Euro Cup.

Relive all the action and drama from this epic event

Relive all the action and drama from this epic event