Editor's Note: This piece was done in conjunction with our partners at the World Surf League in recognition of Indigenous People's Day

"If you have a racist friend, now is the time for our friendship to end."

To think that a 17-year-old surfer from Australia would be inspired by those lyrics 36 years after they were first sung in Racist Friend - a song by eighties British 2Tone and Ska revival band, The Special AKA - speaks for their undying relevance. Racism isn't new. Its effects aren't confined to one or two regions of the world. In fact, the most popular track from that same album in 1984 was Free Nelson Mandela, a protest against South African apartheid and the imprisonment of the revolutionary leader. I didn't see it becoming anything. I just wanted people to have a conversation, really. - Oscar Langburne

Oscar Langburne has been listening to that album since he was a kid and the simplicity of the message in Racist Friend had obvious relevance. Like plenty of people around the world, the death of George Floyd in May and the protests and riots that ensued in America caught his attention. The inequality that galvanized a worldwide movement didn't look too dissimilar from what some Australians saw in their own country - one whose history includes colonizing on a controversial claim that Australia was a "land belonging to no one" when Captain Arthur Phillip first showed up in New South Wales in 1788. The country now sees a disproportionate number of its indigenous people incarcerated today. As of 2018, while Indigenous Australians accounted for roughly two percent of its total population, they made up 27 percent of the national prison population, and hundreds have died in police custody in the past three decades. Facts like those fanned the flames for Australians who decided the movement didn't have to be strictly American.

Making new sense of all this (while nursing a broken leg and not surfing since April), Oscar was inspired to add something meaningful to the conversation himself.

"I've always been against inequality and racism but I've never had it put right in my face. So I've just been trying to read up and educate myself as much as I can," he says. "I asked dad and he just said there's a lot of good information and songs about this issue. Go find something, keep it simple, keep reading about it, and take it from there. But be prepared to cop some bullying."

With the encouragement from his father and an impassioned interest in what was happening in the world, Oscar fell back on that old Specials AKA album he'd been listening to since he was a kid and realized the simple lyrics of Racist Friend could serve an equally simple objective: "Just start talking about it, because it's not talked about enough."

He started by getting some 20 shirts printed with the lyrics of that song on them, dyed them at home in the bathroom himself, and sent them out to anybody he had in mind, just hoping they'd be conversation starters and a positive call to equality.

He either reached out to or was contacted by surfers like "Jack Freestone, Jeremy Flores, Tom Carroll, Lee-Ann Curren, Russel Bierke, Kelly Slater, Chris Cote, Strider Wasilewski, Selema, Alex Knost, Luke Davis, Betet Merta plus heaps of others," to offer support by donning one of his shirts. He dipped into his Rolodex of musicians as well, connecting with Seye, the bass player in Gorillaz, Idles, Alison, from The Kills, Stuart from Mogwai, Paul Banks from Interpol/Muzz, Ben Lee, Warren Ellis, Kid Congo, and the list goes one. He started getting requests from everyday friends and followers along the way, and before he knew it, Oscar printed, dyed, and shipped around 200 shirts. RVCA founder Pat Tenore, himself passionate about the push for equality, saw what his young athlete ambassador was doing and decided to join in with some direct support for his activism.

"I didn't see getting anything out of it other than just raising a bit of awareness towards it I guess," Oscar says. "I didn't see it becoming anything. I just wanted people to have a conversation, really."

Tenore's help would make Oscar's shirts more than a conversation piece. To this point, the shirts hadn't been for sale and Oscar wasn't accepting money for them even when friends and supporters would offer, paying to have them made and shipped out of his own pocket from the start. But with RVCA's support, they'd launch a new limited line for a cause with different words from the original lyrics of Racist Friend but the same direct messaging: Destroy racism, racist people are not my type of people. Half of the proceeds would now go to a relevant charity in Australia, AIME, and the other half would go to a relevant charity in the States, Inner-City Arts - each helping underprivileged children reach their potential.

Sadly unsurprising and just like dad predicted, the teenage professional surfer has run into some negativity along the way for something he'd only ever intended to be positive.

"Why don't people want (other) people to have a fair opportunity? A fair chance? Why don't people want everyone to be equal?" he asks. "I've learnt the surf community isn't as open-minded as you'd think," pointing out some of the responses he gets online when he promotes anything from shirts to Spotify playlists he's made to keep the topic at the forefront rather than another passing headline. Or, of course, some of the negative responses to Tyler Wright's gesture in support of the Black Lives Matter message in September. But none of it has discouraged him to the point of slowing down. If anything, the positivity and support seem to have outweighed the negatives.

"You'll never please everyone with how you surf, look, or what you say so I just do my own thing," he says. "I always get heaps of encouragement from people I respect and a lot of people from different backgrounds who actually live it so I just focus on that." 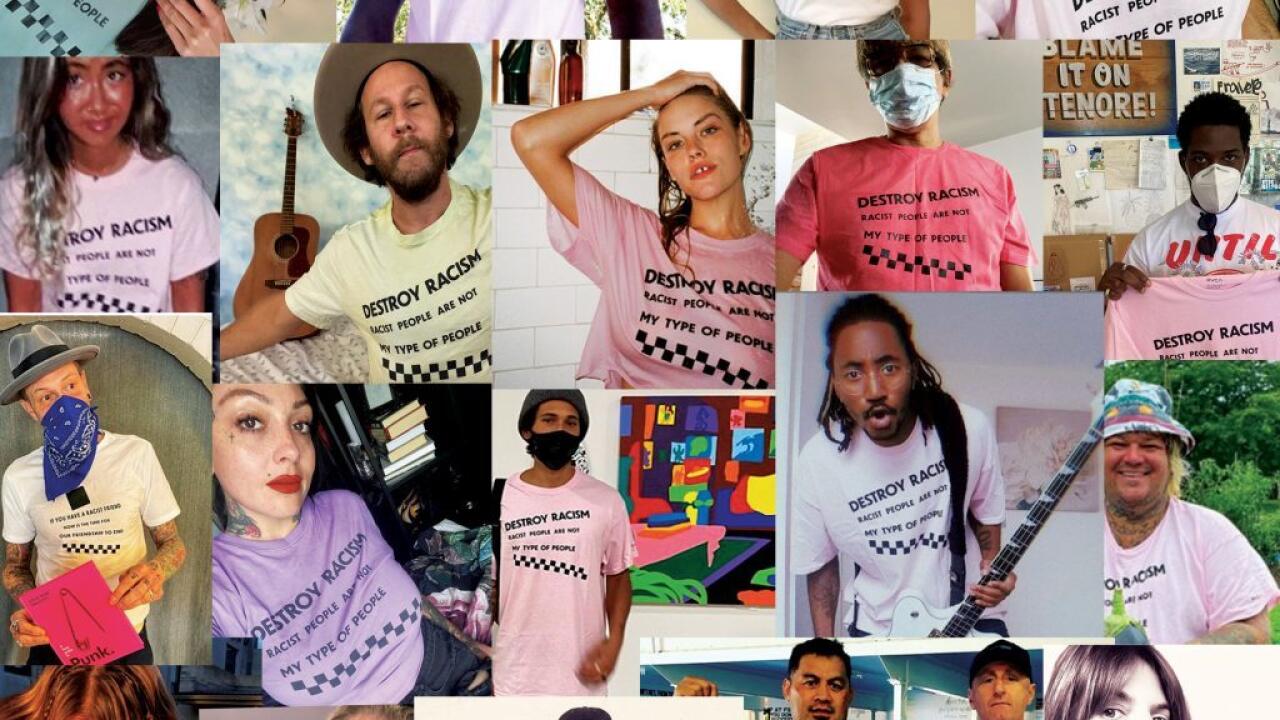 I always get heaps of encouragement from people I respect and a lot of people from different backgrounds who actually live it so I just focus on that. - Oscar Langburne

Everyone from CT surfers to everyday fans and even Rhoda Dakar herself, the woman who sang Racist Friend when it came out in 1983, have been in touch to show their support and encouragement for Oscar's work. It's created enough momentum that he's added another cause to benefit from the latest line of shirts. Since Oscar still doesn't accept money for any of his shirts, he's started encouraging those who reach out to donate to Project Nasi, a group that's been helping feed the people of Bali while the community navigates COVID-19 hardships.

"So many Australians and surfers love going to Indo and they are really struggling," he says.

So what started out as a handful of t-shirts dyed in a bathtub have morphed into causes for good around the globe. As the saying goes, "If you want a new idea, read an old book." Or in Oscar Langburne's case, just listen to an old record.